Dear Subscribers: We wish you and your families continued health and safety as we transition to reopening. We thank you for your ongoing support. 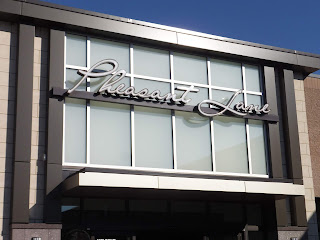 “Easing back” to the mall is putting it kindly, I guess - it was more like crawling back.

As a resident of the area, I decided to stop by Pheasant Lane Mall, a Simon-run property in Nashua, New Hampshire on three different occasions during the past week to observe retail occupancy, and to see if shopper enthusiasm would build after eight weeks of stay-at-home orders. Stores were in no rush to be the first to pull the trigger, and shoppers were in no rush to experience the new normal; at least that’s the way Week 1 looked at New Hampshire malls following the lifting of restrictions at stores.

My first visit occurred on Monday afternoon, when I found that mall hours had been shortened from 11:00 AM to 7:00 PM six days a week and Sunday from 12:00 PM to 6:00 PM. Complimentary face masks were available at mall entrances, and there was no shortage of “Stay 6 Feet Apart” signs throughout the mall. Pheasant Lane is part of a second wave of Simon properties that have begun to open their doors, which also included the Mall of New Hampshire in Manchester and the Mall at Rockingham Park in Salem. 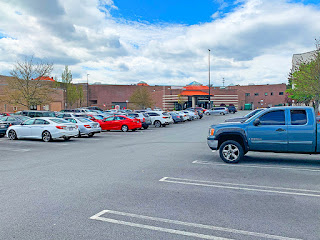 Foot traffic was severely hampered at Pheasant Lane Mall with three department stores closed, Sears permanently and Macy’s and JCPenney temporarily. Target was open, of course, one of the selected stores to have been considered essential throughout the pandemic. Unfortunately, for some unknown reason, this anchor unit elected not to open interior entrances to the mall on either level, constraining Target shoppers from directly accessing the common area of the mall and vice versa. It could have been staffing levels or pilferage concerns that kept the doors closed.

Dick’s, the only other anchor to be opened, only had its upper level entrance accessible to mall shoppers while the lower level entrance remained closed. Consequently, those mall shops that decided to open on Day One had to draw traffic virtually on their own, a recipe for a potential sales setback. At the same time only about 25-30% of the mall shops were open, and those were weighted toward independent operators and kiosks. 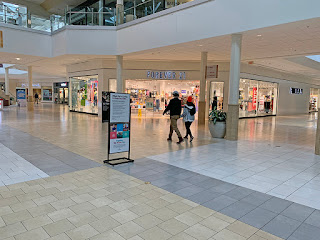 My second visit was on Wednesday afternoon; it was almost a carbon copy of my first trip, with the exception of one additional open food court tenant, Cibao Chicken. There was evidence, however, that other retailers were getting close to opening with some employees apparently prepping their stores.

My Friday visit, however, did show improvement albeit limited. There was a noticeable uptick in foot traffic, with some shoppers apparently biding their time until the weekend. Taco Bell had opened in the food court. A few more stores had opened as well - American Eagle, sporting a 60% OFF sale, was one. Abercrombie & Fitch and Francesca’s had also opened and both were pushing their own 50% OFF sales. Aerie was another retailer that waited for the weekend “rush”. But that was it. For the most part, all three visits were uninspiring and left me with considerable doubt regarding a quick economic turnaround.

Week Two at Pheasant Lane Mall promises to draw better traffic following the Macy’s opening on May 18th. Manchester and Salem stores have opened as well. Perhaps the silver lining here is that a slow rollout will mean a safer rollout. I wouldn’t bet the farm on it, but the days and weeks ahead will get us, one hopes, closer to where we need to be.

Posted by KeyPoint Partners at 12:07 PM No comments:

The Commerce Department said US retail sales tumbled by a record 16.4% from March to April as the pandemic kept shoppers away. The severity of the decline is unrivaled for retail figures that date back to 1992, and nearly doubled the record drop of 8.3%, set last month. The migration of consumers to online accelerated, with that segment posting an 8.4% gain. Other than online, not a single retail category was spared. Clothing sales tumbled 79%, department stores 29%. Restaurants suffered a nearly 30% decline. Auto sales dropped 13%. Furniture stores took a 59% plunge. Electronics and appliance stores were down over 60%. After panic buying in March, grocery sales fell 13%. Sales report below.

COVID-19:
Game Stop has begun the process of re-opening stores in South Carolina and Georgia and is preparing for the potential to re-open in other states in the coming weeks. GameStop operates approximately 5,500 stores across 14 countries....The Retail Industry Leaders Association and the National Retail Federation released a Blueprint for Shopping Safe that calls for a 3-phase approach to reopening retail. The plan urges governors to issue uniform, statewide protocols for retailers as they reopen stores and work to keep employees and customers safe... Costco is requiring that all members and guests wear a face covering that covers the mouth and nose at all times while in stores...Kimco, which operates more than 400 grocery-anchored and mixed-use centers across the country, kicked off its Curbside Pickup program at Grand Parkway Marketplace in Spring, Texas. The company intends to move the program nationwide this month...Peterson Companies, owner of 4 lifestyle centers in the Washington DC region, has issued a detailed plan to reopen its locations...Chains Reopening: Havertys expects to reopen all of its 120 stores by mid-May... David’s Bridal’s 300-plus store locations will be open for appointments starting June 1, 2020... Chico’s FAS, whose banners include Chico’s, White House | Black Market and Soma, will begin a 3-part store reopening plan this month, beginning with fulfillment of orders through physical locations using store inventories. Store openings will be consistent with local health and safety regulations...Starbucks expects to have approximately 90% of all company-operated US stores reopened by early June with enhanced safety protocols and modified schedules. Starbucks is asking its landlords for a break on rent. In a letter to landlords earlier the month, the company asked for “adjustments to lease terms and base rent structures.”…Best Buy has started reopening some stores, but initially customers will need an appointment. It also is resuming home delivery and other at-home services. The service will launch in about 200 of Best Buy’s 1,000 US stores...Children’s Place has started reopening stores in 10 states…Macy’s has begun reopening stores in 4 states with reduced hours. The retailer expects that all its 775 stores will be reopened in 6 weeks, should local governments allow retailers to proceed…Five Below has started reopening its stores. The retailer is also slowing its expansion amid the pandemic. It has reduced its new store opening target for fiscal 2020 to 100 - 120 stores as compared to the original target of 180 stores... Kohl’s will open about 25% of its stores this month…Ulta will reopen approximately 180 stores this month; it has been offering curbside pickup at more than 350 stores... Nordstrom is preparing to reopen stores in a phased approach. The company is also planning to permanently close 16 full-line stores... Express expects to reopen approximately 300 stores before Memorial Day, in accordance with federal and state guidelines... Gap Inc. will reopen up to 800 stores by the end of this month...Genesco Inc. has reopened more than 300 Journeys stores and anticipates reopening more than 400 stores by the end of May. Genesco’s Johnston & Murphy division began its initial phase of reopenings with up to 30 locations.
Posted by KeyPoint Partners at 12:04 PM No comments:

Dollar General has entered Washington state with a store in Cathlamet. 6 additional locations are under construction in the state. In March, Dollar General said it planned to open 1,000 new stores, remodel 1,500, and relocate 80 stores this year. As of February, Dollar General operated 16,368 stores in 45 states…Murphy USA opened 2 new locations in the quarter, bringing the store count 1,161 Murphy USA sites and 330 Murphy Express sites...Grocery Outlet opened 10 new stores and closed 2 stores in the 1st quarter, giving the retailer 355 US locations...Tractor Supply opened 20 new stores and closed 1 Del’s location. As of March 28, Tractor Supply operated 1,863 stores in 49 states along with 180 Petsense stores in 26 states... Hightimes Holding Corp., owner of cannabis brand High Times, announced an agreement to acquire equity and assets of 13 CA dispensaries from Harvest Health & Recreation Inc. The transaction will allow Hightimes to enter the retail sector. The company plans transform the stores to High Times destinations…REI added 8 new stores by the end of 2019, bringing the co-op’s total to 160 in the US...Fast-casual restaurant chain Doner Kebab plans to open 350 US restaurants over the next 7 years. The first location will be at American Dream in NJ...Boston Market has been acquired by Engage Brands, LLC from affiliates of Sun Capital Partners. Terms were not disclosed. Sun Capital purchased Boston Market from McDonald’s in 2007. The brand ended 2019 with 376 domestic units.
Posted by KeyPoint Partners at 12:02 PM No comments:

Saugus, MA restaurant Kowloon plans to transform its parking lot into a drive-in movie theater, and deliver food and drinks to diners in their cars. Guests will also be able to bring lawn chairs and sit outside...LL Bean has reopened two of its Freeport, ME retail stores...Westfarms shopping center in West Hartford CT will reopen this month, but it’s unlikely all stores will open on the same day. Taubman Centers, which owns Westfarms and malls around the country, says the company is seeing an average of 30 - 50% of stores in their malls reopening.
Posted by KeyPoint Partners at 12:01 PM No comments:

Simon Property Group has begun re-opening 49 malls and outlets centers in 10 states this month. These are not only curbside-pickup re-opens Simon will welcome shoppers inside, offering temperature checks and CDC-approved masks and sanitizing kits. Shoppers will not be required to wear masks, though mall personnel will... Brookfield Asset Management is pledging $5 billion to assist troubled retailers operating in its malls. The Retail Revitalization Program, will concentrate on retailers with $250 million or more in normalized revenues that have been operating for at least two years...Ingka Centres, a division of Ingka Group, which owns IKEA and has 45 shopping centers worldwide, is looking to enter 45 large cities across its existing markets and the US. New York, Los Angeles, San Francisco, and Chicago are on its wish list. The company is in talks to buy old post offices, department stores, or existing malls to convert.
Posted by KeyPoint Partners at 12:00 PM No comments: 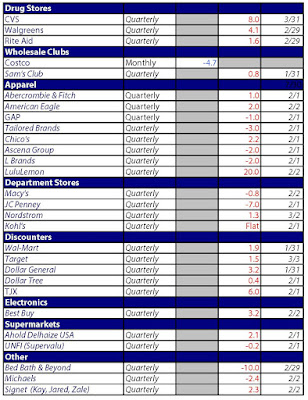 Notes: figures gathered from individual company websites, press releases, and Federal filings.  Not all companies report all figures; results not reported will be marked “n/r”. Quarterly results will be updated when available; quarterly figures are shown in italics. Figures from companies not calculated to one decimal point automatically received an ending digit of 0.
Posted by KeyPoint Partners at 12:00 PM No comments:

Source: U.S. Department of Commerce - commerce.gov
Posted by KeyPoint Partners at 11:59 AM No comments: 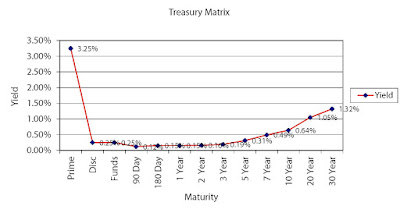 Treasury Yield Sources:  federalreserve.gov; ustreas.gov
Posted by KeyPoint Partners at 11:58 AM No comments:

The Conference Board Consumer Confidence Index® deteriorated further in April, following a sharp decline in March. The Index now stands at 86.9 (1985=100), down from 118.8 in March.

Source: The Conference Board - www.conference-board.org
Posted by KeyPoint Partners at 11:56 AM No comments: