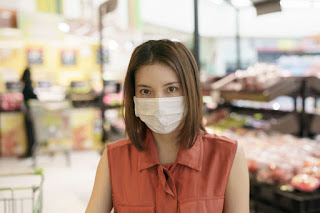 Life has been tough on all retailers in recent weeks, particularly the distressed ones. First restaurants and bars were ordered to close, then major retailers elected to close, and then entire malls followed suit. The response to COVID-19 threatens to impact retail foot traffic in ways never before experienced – and to exacerbate slowing sales trends at brick-and-mortar stores as shoppers continue to shift dollars toward online retailers. As noted by Retail Dive, retail traffic for the second week of March was down 30% year-over-year. This is certainly reflected in the recent announcement by Amazon that they will be hiring another 100,000 workers to handle the overload in warehouses and delivery systems, while Walmart his hiring another 150,000 employees to support the flood of both online and store traffic. The rush to online shopping should create at least some concern that when we eventually “flatten the curve”, not all the business will return to the brick-and-mortar side of the scale.

Not all retailers are facing a doomsday scenario. The fear of quarantines has implanted panic into the hearts of shoppers, causing them to overwhelm supermarkets, drug stores, warehouse clubs, discounters, dollar stores and home improvement stores. There’s no shortage of business among retailers that stock essential goods. Even Best Buy reported a run on home office equipment as many employees are encouraged to work at home. A long list of leading retail chains that rely on discretionary spending should be expected to survive a lengthy slide in performance, although it won’t look pretty on their annual reports this year. We’re talking about the likes of Apple, Ulta, TJX divisions, Kohl’s, Dick’s, Auto Zone, and many others.

That leads naturally to a discussion about those on the edge, the distressed retailers. For this segment of retail there was already much consternation about long-term survival. Among department stores, Neiman-Marcus and JCPenney are both on thin ice. Neiman has been struggling with debt; incremental sales declines will likely weigh heavily on its chances to remain viable. Penney faces similar debt problems. Although new CEO Jill Soltau is making measurable efforts to change the way this once-formidable retailer does business, it may be too little too late. It has been attempting to restructure debt, but it’s still operating with negative cash flow and appears to be heading for at least 15% sales declines in 2020, which may be too much to overcome. 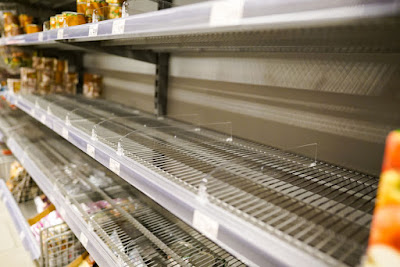 It was already a bad year for Pier 1 before coronavirus. It had to close approximately 450 stores and file for bankruptcy. It appears that COVID-19 may force an eventual liquidation of the chain. Ascena Retail Group, owner of Ann Taylor, Loft, Lane Bryant, Catherine’s and Justice, is also at risk. The apparel retail group recently liquidated the Dressbarn chain following the sale of its Maurices chain earlier last year. It has considered selling other divisions as well. Time will tell if it is able to avoid bankruptcy this year, but serious doubts remain. Destination Maternity, which had already filed for bankruptcy, is likely not to withstand the loss of sales over the coming months. Another apparel chain to keep an eye on is J Crew. And with so many mall based apparel chains and department stores under pressure, there will only be more pressure on many regional malls to keep the lights on.

Athough this is not the most comforting article you could be reading, I am cautiously optimistic that it may be a much healthier environment for retailers that will come out of this and recover, which I believe represents the vast majority of brick-and-mortar stores. Maybe we’re entering an era when retail supply is more in balance with demand and overstored markets are a thing of the past; maybe it took the last domino to fall before that could happen.

Posted by KeyPoint Partners at 8:23 AM No comments:

We’ve all been challenged to make sense of this ongoing global health scare. We’re carefully monitoring information from the WHO, CDC and Departments of Public Health in the various states in which we operate, and relaying this information immediately to our teams and through them to all clients and tenants. As of this writing, while our offices are technically open, most of our team members are working from home. However, we have taken steps to ensure that we continue to provide the same quality of service our clients expect of us. And as you can see, we’re continuing to provide timely industry news and commentary here in KeyPoints.

Posted by KeyPoint Partners at 8:20 AM No comments:

The Commerce Department said retail sales fell in February by the most in a year, indicating the main driver of the US economy, consumer spending, had begun to slow even before coronavirus containment measures began rippling through the economy. The value of overall sales decreased 0.5% from the prior month after a 0.6% gain in January. See sales reports below...Albertsons, the nation’s second-largest supermarket chain with more than 2,200 stores, filed for an initial public offering this month. The company has been owned for the past 14 years by private equity firm Cerberus Capital Management.

COVID-19
These are extraordinary  and challenging  times for retailers, restaurants, and retail property owners.  We can’t include every headline related to retail and the pandemic. A big one: Simon has closed all of its domestic retail properties: malls, outlets and mills. Taubman has closed all but two properties. Also, here is a recent list of retailers who are closing all or many stores for extended periods:

Note: Accelerating/Decelerating announcements may be subject to change in light of current conditions: Bob’s Discount Furniture opened 4 new stores last month in OH and IL and relocated a store in Norwalk, CT Bob’s has 126 stores across 20 states....PacSun is opening two “landmark stores,” in LA and NYC. Each location is designed to channel the energy, history and native talent of its locale, while working to amplify PacSun’s lifestyle brand...The first Amazon Go full-size, cashierless grocery store has opened in Seattle. The store is about 10,400 s/f and stocks roughly 5,000 items, including fresh produce, meats and alcohol...7-Eleven has expanded its “evolution” store format to Washington, DC, with an additional location to open in San Diego later this year. 7-Eleven plans to expand the concept across the country in 2020….Ono Hawaiian BBQ  opened 12 stores in 2019, and plans to open 12-14 new stores in 2020, bringing their total to 100 stores...L Brands plans to open a net of 70 US Bath & Body Works stores this year, up from 18 in 2019, with the majority located in strip centers. At the end of the fourth quarter, the chain had 1,637 US stores... Paper Source has acquired 30 shuttered Papyrus locations, giving it a total of more than 165 stores nationwide. The retailer plans to rebrand the stores, with the first wave of converted locations to open this month…Following the opening of its 100th small-format store last year, Target is planning to open nearly 36 locations in 2020, making it the biggest year to date for small-format expansion. Target will also begin exploring sites for stores that are approximately 6,000 s/f, roughly half the size of its smallest small-format store – as it looks to reach even more shoppers in urban neighborhoods and on college campuses. Target expects to sign the first lease for the new smaller format in 2020, with an opening date in 2021…Primark opened this month at American Dream in East Rutherford, NJ, Primark’s 10th in the US...Ross Stores opened 19 stores and seven dd’s Discounts outlets across 9 states in February and March. The company plans to add approximately 100 new stores – 75 Ross and 25 dd’s Discounts locations – during fiscal 2020.  Currently, Ross operates 1,565 namesake locations in 39 states and 266 dd’s Discounts stores in 20 states…Burlington Stores plans to open 54 net new stores in 2020…American Eagle Outfitters intends to accelerate the growth of Aerie in 2020, opening 60 to 70 stores. During the past year, American Eagle opened 37 Aerie standalone stores, ending the year with 148 locations…Taco Bell plans to revamp its urban Cantina concept with new “fast-social” restaurants in NY and CA.In addition to those 2 units, the brand will test a conversion of 3 traditional Taco Bells into Cantinas...Dollar General opened a store in Pine Bluffs, WY, its 1st in the state, expanding its footprint to 45 states. In December, the retailer announced plans to open 1,000 stores in 2020. The company operated 16,094 stores in 44 states as of November 1, 2019...CVS Pharmacy will acquire 99 pharmacy locations from Schnucks Markets along with the prescription files from 11 other locations. Terms of the deal were not disclosed. The acquired locations will all be rebranded under CVS Pharmacy. Schnucks operates 112 stores…Wagamama plans 30-40 new US locations. The chain currently operates 200 restaurants…Dollar General plans to open 1,000 locations and relocate 80 existing stores. During fiscal year 2019, the company opened 975 new stores, remodeled 1,024 stores and relocated 100 stores. It operated 16,278 stores in 44 states as of January 31, 2020... Zumiez intends to open up to 8 stores in North America in 2020. Zumiez ended 2019 with 718 stores.

Posted by KeyPoint Partners at 8:16 AM No comments:

Guy Fieri’s Boston Kitchen + Bar and Chicken Guy! will open this summer in the former Masonic Lodge in downtown Boston…Natick and several other communities in New England have been targeted for franchises by Kelly’s Roast Beef, which has 4 area locations: Revere Beach, Saugus, Danvers and Medford. The chain plans to open as many as 6 new franchise restaurants, including locations in Worcester, Natick, Quincy and Providence. Kelly’s is also eyeing “express” locations in mall food courts and local universities. The ultimate goal is to have as many as 50 total locations open and operating in the next 5 years…Alpine Income Property Trust Inc. has acquired the 39,474 s/f 12-screen AMC Theater in Tyngsboro for $7.055 million. The seller was Stavins & Axelrod Properties Inc...The team behind Cambridge restaurant Puritan & Co. will open 3 new concepts at The Shed, a two-story building to be built at the mixed-use Cambridge Crossing Development near Lechmere Station. Café Beatrice, an all-day café; Gepetto, a 60-seat full-service Italian restaurant; and The Lexington, a rooftop bar and lounge are expected to open this June. Lamplighter Brewing Co. is also expected to open a taproom at The Shed in early summer…Whole Foods Market will open a 42,000 s/f  store in Portsmouth, NH, its 3rd in the state, this fall at Durgin Square Shopping Center, a 135,000 s/f retail property that houses HomeGoods and T.J. Maxx.

Posted by KeyPoint Partners at 8:15 AM No comments:

sweet green, Skin MD and Blo Blow Dry Bar are all slated to open The Village at Burlington (MA) Mall in 2020.
Posted by KeyPoint Partners at 8:14 AM No comments: 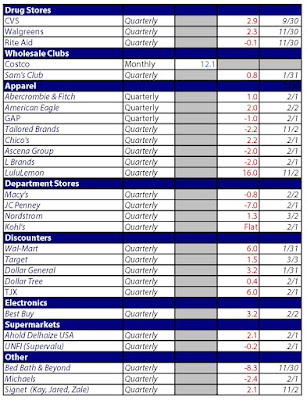 Notes: figures gathered from individual company websites, press releases, and Federal filings.  Not all companies report all figures; results not reported will be marked “n/r”. Quarterly results will be updated when available; quarterly figures are shown in italics. Figures from companies not calculated to one decimal point automatically received an ending digit of 0.
Posted by KeyPoint Partners at 8:13 AM No comments:

Source: U.S. Department of Commerce - commerce.gov
Posted by KeyPoint Partners at 8:12 AM No comments: 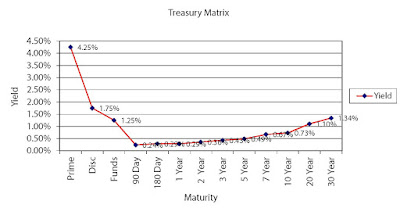 Treasury Yield Sources:  federalreserve.gov; ustreas.gov
Posted by KeyPoint Partners at 8:11 AM No comments:

The Conference Board Consumer Confidence Index® improved slightly in February, following an increase in January. The Index now stands at 130.7 (1985=100), up from 130.4 in January.

Source: The Conference Board - www.conference-board.org
Posted by KeyPoint Partners at 8:10 AM No comments:

Source: Institute for Supply Management - Manufacturing Report on Business - www.ism.ws
Posted by KeyPoint Partners at 8:10 AM No comments: