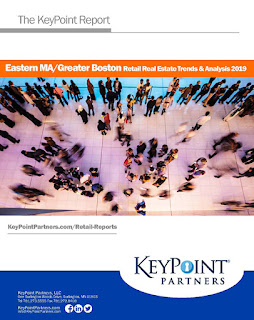 The 2019 KeyPoint Report for Eastern Massachusetts/Greater Boston, based on our proprietary GRIID™ retail database, is in production and should be available by the end of June. While you’re waiting, here’s a preview - but please consider these results preliminary and subject to change:

Inventory and Vacancy: Total inventory in Eastern Massachusetts experienced a modest decline this year to 196.0 million square feet, a drop of 0.2%, caused largely by demolitions and repurposing of space to non-retail use. Following a substantial rise in the vacancy rate last year to 9.5%, it was encouraging to see the region show a nominal decline to 9.4% this year.

But even with less vacant space in the region, the contraction of total space resulted in a modest negative absorption of 170,200 square feet. While there are a number of retailers continuing to expand, store closings and liquidations counterweigh on the region and hinder consistent absorption gains. Without the repurposing of space, conditions in Eastern Massachusetts would be of even more concern.

Size Classifications: Unlike last year, when all size classifications experienced an increase in vacancy rates, this year was mixed. Smaller categories up through 25,000 square feet, with the exception of the under 2,500 square foot segment, ended the year with higher vacancy rates. Store closings at Rite Aid, Papa Gino’s, and 7-Eleven as well as liquidations of Payless ShoeSource, Charlotte Russe, and Gymboree were largely the cause. Among the larger format tenants over 25,000 square feet, three categories lowered vacancy rates, while the 200,000 SF plus category remained fully occupied. A number of tenants absorbed larger vacancies left behind by Toys R Us, Benny’s, Kmart and others. Retailers expanding into these spaces included Ocean State Job Lot, Hobby Lobby, Target, and PGA Superstore, among others.

Town Rankings: The five communities encompassing the most retail space remain the same for the third year in a row, with Boston and Cambridge maintaining their dominance in first and second position. Natick, Brockton, and Burlington follow. Westwood remained in the top spot in the region for lowest vacancy rate, although nominally higher than last year at 1.7%.  Abington moved up to second place with a rate of 2.8%. Stoneham repeated its third place finish from a year ago at 3.0%.

Taunton had the highest vacancy rate in Eastern Massachusetts for the third straight year, now at 31.9%, the highest a single town in the region has ever experienced. Wrentham is a distant second with a rate of 19.4%; the town is still saddled with the never-occupied Shops at Wrentham, which was speculatively built in 2014 and which may end up as repurposed space in the future. The property is reportedly up for sale.

Retailer Activity: The retailer gaining the most retail space in the region was Hobby Lobby, adding stores in Braintree and Attleboro. In second place was Target, opening three small format stores in Burlington, Medford, and Cambridge. Rounding out the top three is At Home, adding a second store to the region in Dedham. By number of new units, Xfinity opened nine stores, more than doubling it count in the region to 16 units. Verizon and Richfield Convenience both opened seven units, good for a second place tie in the region.

In a year which finally saw Sears file for bankruptcy, it is not surprising to see that once-venerable department store at the top of the list in Eastern Massachusetts for largest space reduction, closing stores in Peabody, Natick, and Cambridge. This follows three closings last year. Rite Aid also had a difficult year following the acquisition by Walgreens of more than 1,900 stores. As a result, approximately 350,000 square feet of the Rite Aid stores closed. 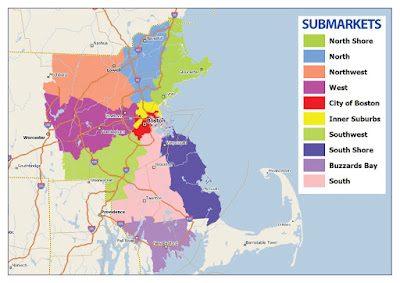 Parent company National Stores decided it was time to shut down its six Fallas stores in the region, placing the retailer third in contracted space. Papa Gino’s and D’Angelo’s, operating under the same parent company, closed a combined 69 locations, placing the restaurant chains in first and third place among retailers closing the most stores. In second place was Payless ShoeSource, closing its remaining 37 stores in the region as part of a national liquidation.