Then and Now: Decade of Change? 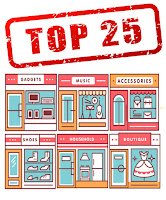 This is a time of great change in the retail industry. Everyday there’s a new headline about the so-called “retail apocalypse” as we hear of another venerable old-school retailer closing up shop.

In that light, if I were to ask you how much a list of the Top 25 Retailers by Store Count in a given region of the country had changed in the last ten years, what would you say – the list had changed a great deal, somewhat, or not very much, really?

We decided to use our proprietary GRIIDTM retail database to see how much change this region (Eastern Massachusetts/Greater Boston) has experienced during the past 10 years. To do so, we listed the top 25 retailers by store count in 2008 and in 2018. The rankings are shown below: 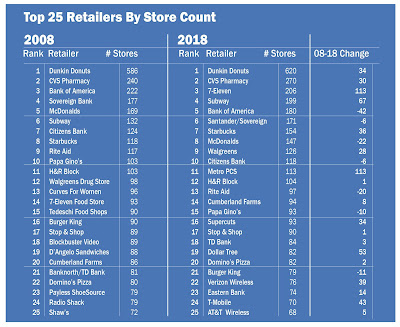 Among the 25 retailers with the most stores in 2018, only six have reduced their store count in the past decade. These include three banking firms: Bank of America, Santander, and Citizens. Fast food chains McDonalds, Papa Gino’s, and Burger King are the other three.

There are only six retailers ranked in the current top 25 that are not on the 2008 list. These include wireless phone chains Verizon, AT&T, and T-Mobile. The others are Supercuts, Dollar Tree, and Eastern Bank, which was in acquisition mode earlier in the period. Heading the top 25 are Dunkin and CVS, which also topped the list in 2008. Among the top 25 retailers adding the most stores during the period were 7-Eleven, by way of the Tedeschi acquisition, and Metro PCS, each increasing by 113 units. Metro PCS had not made its entry into the region yet in 2008. Subway and Dollar Tree were next, adding 67 and 53 stores, respectively.

Eight of the top 10 from 2008 remain in the current top 10. Seven companies on the 2008 list have fallen out of the 2018 list - and they include three that are no longer in operation: Tedeschi, Blockbuster, and Radio Shack. Curves for Women took a precipitous drop from #13 on the list to #561; only five locations remain under their nameplate in 2018. D’Angelo’s dropped from #19 to #37 over the ten year period. Payless ShoeSource fell from #23 to #56, while Shaw’s Supermarket went from #25 to #41.

Are you surprised or not? The changes affecting our industry are real and significant, and we’ll continue to track them. Certainly a sizeable number of retailers not in the top 25 have been severely impacted, and quite a number are no longer in operation. However, it appears that the answer to the specific question we posed above is a hardly-apocalyptic “not very much, really”. Let’s see what the next ten years bring.

Posted by KeyPoint Partners at 1:58 PM