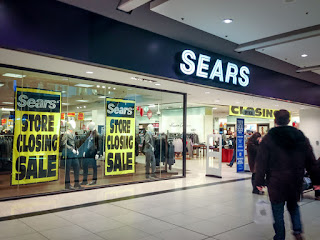 When a major retailer goes belly up, we hear a wealth of opinions about which other retailers are in the best position to capture market share left behind in the aftermath.

We heard it most recently with Toys R Us: Target, Walmart, Costco and others will likely absorb a piece of the action in the toy category. We heard it when Sports Authority liquidated: Dick’s Sporting Goods was the obvious choice to pick up the slack in that category. And over the years, it was Best Buy reaping the “rewards” left behind by Circuit City, Bed Bath & Beyond doing the same when Linens ‘N Things went out, and don’t forget the bump Barnes & Noble experienced when Borders closed its doors.

Although Sears hasn’t filed yet, its ongoing initiative to eliminate stores operating at a loss has freed up substantial sales dollars. Sears reduced its store count by 241 units between 2012 and 2017 - and saw its US revenue drop from $21.0 billion to $11.1 billion during that time frame, a decline of nearly $10 billion (yes, that’s BILLION with a B - a staggering TEN BILLION). When $10 billion gets tossed back into the expenditure pot, someone must be benefitting. Where have those revenue dollars gone?

Other Department Stores: Department stores have been impacted by online retailing as much as any retail sector. Sales at Sears’ most prevalent co-anchors, Macy’s and JCPenney, were examined during the same five-year period. Both companies have been consolidating as well, often closing stores at the same mall locations as Sears. Macy’s closed 141 stores between 2012 and 2017 while JCPenney vacated 230 units. At the same time, their sales dropped $2.8 billion and $0.5 billion, respectively. So it doesn’t appear that either has been a significant beneficiary of the Sears decline.
Discount Department Stores: How about Target or Kohl’s? Nope. Both reported sales trends during the period that were flat. Target, while increasing store count from 1,778 units to 1,822 units resulting largely from its small store program, experienced a nominal decline in sales from $72.0 billion to $71.9 billion. Kohl’s had a nominal gain in store count from 1,146 to 1,158 stores, although the company has been downsizing selected stores as well. In the meantime, sales ticked lower, from $19.3 billion to $19.1 billion.

Home, Appliance, Electronics Stores: Sears has always been a hugely heavy hardlines retailer, generating 72% of its merchandise sales on this side of the business just last year. So have Home Depot, Lowe’s, or Best Buy gained market share? Well, it wasn’t Best Buy. Sales for this electronics chain were marginally lower at $42.2 billion last year compared to its fiscal 2012 level of $43.4 billion, while its store count dropped from 1,103 units to 1,008 units. Home Depot and Lowe’s have shown significant sales growth since 2012. Home Depot sales jumped from $74.8 billion to $100.9 billion during the five years, a 35% gain in volume; Lowe’s increased sales from $50.5 billion to $68.6 billion, gaining 36%, similar to that of Home Depot. 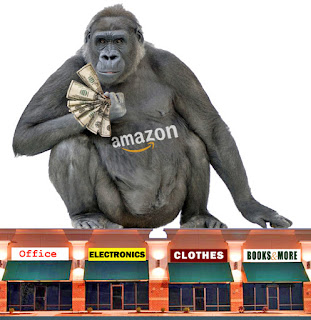 A reasonable argument might be made that these two home improvement chains have captured some portion of the sales cast aside by Sears. At the same time, it should not go unnoticed that both chains have been riding a very strong housing market in recent years.

Furthermore, both chains opened stores in that period. Home Depot increased its store count by 21 stores for a total of 2,284 units. Lowe’s store count at year end 2017 was 2,152 units, up from 1,754 stores in 2012 (most of that gain came from its 245 store acquisition of Canadian-based ROMA). It’s likely that these two factors had much more to do with top line gains than the absorption of Sears dollars.

Without strong evidence that any particular brick-and-mortar retailer gained from the Sears store contraction, it may be that Sears’ departmentalized sales are too fragmented to have the dispersion of these expenditures end up conspicuously with any particular retailer.

Or there could be another, simpler, more obvious explanation…the 900 lb. online gorilla! (Hint: it begins with an “A”). 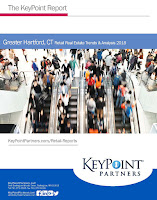 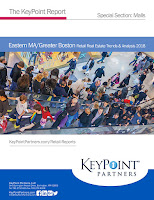 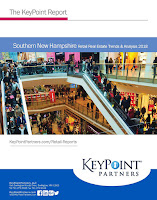 See current and past reports at KeyPointPartners.com/Reports
Posted by KeyPoint Partners at 12:10 PM No comments:

American Eagle Outfitters plans to open 50 to 80 Aerie stores next year. The company currently has 109 Aerie stand-alone stores...Women’s apparel retailer New York & Co. is changing its name to RTW Retailwinds. The company has 425 stores…Online furniture retailer Burrow has opened its first physical store, called Burrow House, in the SoHo section of NYC…Hollywood Feed has acquired Rucker Pet, bringing Hollywood Feed’s Atlanta store count to 16 and its nationwide store count to more than 80. Hollywood Feed plans to open 8 new stores in the coming months…Five Below, which recently opened its 700th store, is on track to open 125 stores this year….Zips Car Wash acquired 4 Wash Wizard Car Wash locations in  So. Carolina. Zips will now operate 12 stores across the state and 28 locations up the Eastern Seaboard…Amazon opened its third cashier-less Amazon Go convenience store in its hometown of Seattle, its largest store yet…Dollar General plans to open approximately 900 new stores in fiscal 2018. It will also remodel 1,000 locations and relocate 100 stores….The Coca-Cola Company has agreed to acquire U.K.-based Costa Limited for $5.1 billion. Costa operates nearly 4,000 coffee cafes across 32 countries…Lululemon  opened four net new stores and completed seven remodels in the last quarter, and expects to open about 40 new locations by the end of the year. The company also opened 23 temporary stores, and plans to more than double that number in Q4... Taco Bell plans to open 300 new small-format restaurants across the country in the next four years... Milan-based 10 Corso Como has opened its first US store, a 28,000 s/f space in NYC’s Seaport District. Taking up the entire first floor of the Fulton Market Building, the store features fashions, books, beauty items, and design objects along with an Italian café and restaurant, garden, and art gallery... Discount Tire opened the franchise’s 1,000th store, in Phoenix, AZ. The tire retailer currently has stores in 34 states with plans to expand in 3 more states in the near future…Amazing Lash Studio opened its 200th studio, in East Brunswick, NJ. The chain has 200 studios in 33 states...First Watch, the daytime-only restaurant brand, plans to open at least 100 more restaurants by the end of 2019. The company has more than 330 restaurants in 29 states, including about 260 First Watch restaurants and 70 eateries under The Egg & I brand. The ultimate goal for the brand is 1,400 locations…Crate & Barrel will open a full-service restaurant in its store at Oakbrook Center, Oakbrook, IL next spring. The restaurant is a partnership between the retailer and Chicago’s Cornerstone Restaurant Group...Tokyo Joe’s opened its 50th Restaurant, in Wheat Ridge, CO, the 4th Tokyo Joe’s to open in 2018...AT&T plans to open 1,000 new stores. In addition to standard retail locations, AT&T plans to open pop-up stores in apartment buildings, condos and other locations in dense urban environments. The company, which claims it can open these smaller stores within 60 days of signing a lease, plans to launch 100 pop-ups this year…Amazon is considering a plan to open as many as 3,000 new Amazon Go cashierless stores by 2021, a move that could make it one of the biggest chains in US. The online giant will open about 10 locations by the end of this year, and about 50 locations in major metro areas in 2019...Sprouts Farmers Market has expanded its US footprint to 19 states with the opening of its first PA store. Sprouts opened 16 stores in the first half of 2018, including a location in So. Carolina in June which was the 300th Sprouts store…Wegmans will open its 98th store this month in Lancaster, PA... Inspire Brands, parent company of Arby’s, Buffalo Wild Wings and Rusty Tacos, has agreed to buy Sonic Corp. for $2.3 billion. Following the completion of the deal, Sonic, parent company of quick-service burger chain Sonic Drive-In, will be a privately held subsidiary of Inspire, which is majority-owned by private equity firm Atlanta-based Roark Capital Group. The deal will make Inspire Brands one of the largest foodservice companies in the country with more than 8,000 company-owned and franchised locations when it adds Sonic’s roughly 3,600 units to its group, making it one of the top 10 largest restaurant companies in the US.
Posted by KeyPoint Partners at 11:57 AM No comments:

A total of 82 former Toys “R” Us and Babies “R” Us stores and other real estate assets will be auctioned this month. The auction will include 52 ground-leased properties, 29 building leases and one parking lot lease, including Toys “R” Us and Babies “R” Us, as well as side-by-side or combined stores...Henri Bendel is shutting all 23 Bendel’s stores nationwide, including its landmark flagship at 714 Fifth Avenue, after 123 years. The closing was announced by its parent company L Brands, which also owns Victoria’s Secret and Bath & Body Works...Supervalu Inc. has agreed to sell 19 of its 36 Shop ‘n Save grocery stores to Schnuck Markets Inc. 15 of the 19 stores have pharmacies, which will also be purchased by Schnucks. The pharmacies will remain open under the Schnucks banner. Schnucks is additionally acquiring 4 of Shop ‘n Save’s 7 fuel centers. Supervalu operates 3,495 wholesale primary stores and 111 grocery stores under three banners. Schnucks operates 99 stores in the Midwest... Del Frisco’s Restaurant Group Inc. is selling all 14 locations of the Sullivan’s Steakhouse chain to Romano’s Macaroni Grill for $32 million. The deal is expected to close by Sept. 30. Macaroni Grill operates 85 company-owned restaurants in 22 states and 23 franchise locations globally.
Posted by KeyPoint Partners at 11:56 AM No comments:

Del Frisco’s Restaurant Group Inc. opened its second Double Eagle Steakhouse in Boston, the 15th for the brand. Del Frisco’s owns 84 restaurants including Barcelona Wine Bar, Bartaco, Del Frisco’s Grille and Sullivan’s Steakhouse...Trillium Brewing plans to open a farmhouse brewery in Connecticut. Trillium has MA breweries in Fort Point and Canton. Trillium is planning to move from its small Fort Point brewery to a two-floor restaurant, taproom, and retail space around the corner at 50 Thomson Place, which will have increased brewing capacity and a roof deck...Sullivan Tire and Auto Service has acquired Montvale Tire Car Care Centers.The acquisition extends the network of Sullivan Tire Auto Service Centers to 71 throughout New England, including 43 in MA... Save-A-Lot grocery store in Taunton closed this month. The discount grocery opened in 2006 in the rear of Mill River Professional Center. Save-A-Lot stores in Brockton and Fall River remain open for business.
Posted by KeyPoint Partners at 11:55 AM No comments: 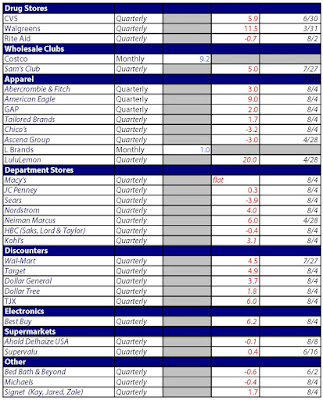 Notes: figures gathered from individual company websites, press releases, and Federal filings.  Not all companies report all figures; results not reported will be marked “n/r”. Quarterly results will be updated when available; quarterly figures are shown in italics. Figures from companies not calculated to one decimal point automatically received an ending digit of 0.
Posted by KeyPoint Partners at 11:54 AM No comments:

The Commerce Department said Sales at retail stores and restaurants rose 0.1% from the prior month to a seasonally adjusted $509 billion in August, the smallest rise since February.

Source: U.S. Department of Commerce - commerce.gov
Posted by KeyPoint Partners at 11:53 AM No comments: 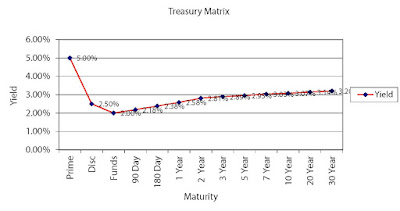 Treasury Yield Sources:  federalreserve.gov; ustreas.gov
Posted by KeyPoint Partners at 11:52 AM No comments:

Source: The Conference Board - www.conference-board.org
Posted by KeyPoint Partners at 11:51 AM No comments:

Source: Institute for Supply Management - Manufacturing Report on Business - www.ism.ws
Posted by KeyPoint Partners at 11:50 AM No comments: