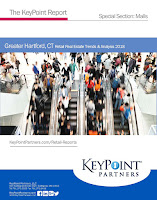 With the releases of the KeyPoint Report on Eastern Massachusetts/Greater Boston behind us, and the report for Southern New Hampshire in the works, it’s time to move on to the report for Greater Hartford, Connecticut, based on our proprietary GRIID™ retail database. As with the other reports, our modus operandi is to share some of the regional highlights while the complete version is still “baking.” In Greater Hartford, the 2018 retail market was a relatively stable one.

Retail Inventory and Vacancy: Total retail space in Greater Hartford currently totals 37.6 million square feet, a nominal decrease of 47,200 square feet from last year. The change is primarily attributed to a low level of new development and a number of conversions to non-retail space. The region was able to weather the Toys R Us/Babies R Us liquidation, which added more than 172,000 square feet of vacancy to the region, and at the same time benefit from the absorption of other existing vacancy, ending the year with a decline in the vacancy rate to 10.6%. This reflects a significant improvement from the past two years when the vacancy rate was stuck at 11.1%. Furthermore, the resulting absorption rate of 164,600 square feet was the strongest since 2015.

Size Classifications: During 2018 changes in vacancy rates among size classification generally show improvement in vacancy. However, the most glaring change occurred in the 25,000-49,999 square foot segment. This particular classification was impacted substantially by the store closings resulting from the Toys R Us liquidation, resulting in a jump in the vacancy rate from 2.5% in 2017 to a current level of 6.2%. The only other size classification to show an increase was the 100,000-199,999 square foot bracket, singularly impacted by the Sam’s Club closing in Manchester. Another particularly notable change this year occurred in the smallest segment, the Under 2,500 square foot classification, which experienced a decline from 17.9% to 14.9%, the strongest improvement in the region. As the largest segment of retail in Greater Hartford, this dramatic improvement had the most positive effect on the region as a whole. Also showing solid improvement was the 50,000-99,999 square foot size range, which experienced a vacancy rate decline of 240 basis points to 8.3%. This was a case of addition by subtraction following the demolitions of a vacant Showcase Cinema in East Windsor, which is earmarked for a new casino, and a former Walmart store in New Britain, now the site of a new self-storage facility. 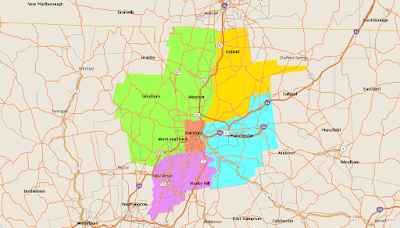 Town Rankings: The ten largest retail markets among Greater Hartford communities, based on square feet of retail space supply, remain unchanged. It should be no surprise that the top three towns are Manchester, West Hartford, and Enfield, all regional retail hubs serving Greater Hartford. Manchester dominates the region with 5.4 million square feet of retail space; West Hartford comes in a distant second with 3.0 million square feet. However, it should be noted that the 1.3 million square foot Westfarms regional mall, which straddles the West Hartford/Farmington line, has a Farmington address but is very much rooted in the West Hartford retail hub. Consequently, West Hartford is effectively a 4.0 million square foot market. Regarding vacancy, the lowest rate was found in Glastonbury, coming in at 4.2%. This was a significant improvement from an 8th place finish last year when its rate was 8.9%. Newington and Rocky Hill tied for second, both inching up from sub-4.0% rates last year to 5.4% in 2018. Bloomfield followed, moving into the top ten this year with a 6.0% vacancy rate. Among towns with the highest vacancy rates, Enfield finished the year at 20.6%, impacted largely by vacant Macy’s and Sears stores at Enfield Mall. Runner-up was East Windsor at 19.4%, followed by East Hartford at 17.2%. Only seven of the top ten towns have vacancy rates above 10.0%.

Retailer Activity: At Home led all retailers in square footage gain this year, recently opening its first Connecticut store in Manchester. Walgreens followed, converting seven Rite Aid units to its namesake pharmacies. Burlington rounded out the top three, adding its fifth store in the region, replacing a vacant Sports Authority unit in Farmington.  T-Mobile added five locations to the region and was the only retailer to add more than two locations in 2018. Roz & Ali, Dollar General, and O’Reilly Auto Parts were among numerous names to add two stores. Sam’s Club led all retailers in space contraction, closing its only store in the region in Manchester. Toys R Us followed with three store closings. Babies R Us was third, shutting down two stores. The two liquidated chains vacated a combined 172,200 square feet. Rite Aid reduced its store count by 10 locations, seven converting to Walgreens and three closing. It has two pharmacies remaining in the region which may eventually convert to Walgreens or close. Pizza Hut and Subway each closed four units.

The KeyPoint Report examines the retail real estate marketplace for Greater Hartford, Connecticut, with a focus on changes between August 2017 and August 2018. This report provides an analysis of changes in the region’s retail activity and examines supply, vacancy and absorption, retailer activity, and market composition by store size and retail categories. The Greater Hartford market includes 26 cities and towns and represents more than 835 square miles. The complete report contains much more detailed information on these categories and more, and will be available soon at KeyPointpartners.com.

Read the complete 2018 KeyPoint Report on Eastern Massachusetts/Greater Boston,
including the special section on malls, available now!
AND watch for The KeyPoint Report on Southern New Hampshire, available soon!
See current and past reports at KeyPointPartners.com/Reports
Posted by KeyPoint Partners at 2:03 PM