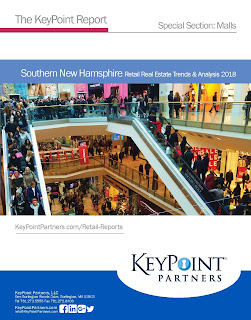 While the 2018 KeyPoint Report for Southern New Hampshire, based on our proprietary  GRIID™ retail database, is in production, we will again share some of the early results:

Inventory and Vacancy Rate: The retail inventory in Southern New Hampshire included 29.8 million square feet in 2018, indicating no appreciable change from a year ago. Vacancy increased 41,200 square feet, equating to a vacancy rate of 9.3% compared to 9.1% last year. At the same time, the higher vacancy rate can be attributed to store closings involving just two retail firms, Toys R Us and Walmart. Toys R Us closed four namesake stores and two Babies R Us stores while Walmart closed two Sam’s Club units. Offsetting these store closings were store openings that filled a number of large format vacancies. Three vacant Sports Authority stores were, or will soon be, occupied by replacement tenants including HomeGoods and Sierra Trading Post in Nashua, Cost Plus World Market in Salem, and Guitar Center, Party City, and DSW in Manchester. BJ’s already opened in the vacant Sam’s Club in Manchester. A vacant Shaw’s anchored strip center in Merrimack is under redevelopment with Planet Fitness now open. Altitude Trampoline Park also will anchor this center, now known as Merrimack 360, and is expected to open later this summer.

Size Classifications: Although there was a modest uptick in vacancy in Southern New Hampshire in 2018, the good news is that the increase was confined to only two size classifications, 25,000-49,999 SF and 100,000-199,999 SF, which can be attributed to the same store closings noted above, Toys R Us, Babies R Us, and Sam’s Club. Vacancy rates in both categories rose by more than 200 basis points as a result. Encouraging this year is that the region experienced significant vacancy declines in all other size categories except 200,000+ SF which includes only one occupied tenant, the Walmart Supercenter in Amherst. The most improvement occurred in the 5,000-9,999 SF and the 50,000-99,999 SF brackets. Vacancy rates were lower in both segments by 130 basis points.

Among towns with at least 500,000 square feet of retail space, Salem remains with the lowest vacancy rate at 6.0%, although up a bit from last year. Derry again is this year’s runner-up, coming in at 6.1%. Merrimack jumped up from 10th place to number three this year, resulting from the Merrimack 360 redevelopment project, eliminating nearly 78,000 square feet of vacancy including an unoccupied Shaw’s Supermarket.  Among towns with the highest vacancy rate, Seabrook moved up from 8th to take over the top spot with a vacancy rate of 16.3%, the Sam’s Club closing largely contributing to the rising figure. Londonderry remains in second place followed by Manchester, which dropped out the number one ranking from last year.

Retailer Activity: Retailers adding the most space in the region include BJ’s Wholesale Club, which back-filled the vacant Sam’s Club in Manchester, followed by Cardi’s Furniture and NH1 Motorplex Indoor Karting, with both filling vacant space at Seacoast Shopping Center in Seabrook. With respect to store count, Metro PCS added three units while Sbarro, Cabinet Depot, and Orangetheory Fitness tied for second with two additional locations. Sam’s Club, Toys R Us, and Babies R Us ranked highest in square footage contraction. Subway reduced its store count in the region by six units, followed by Toys R Us with its four closings. Teavana, Burger King, and Best Buy Mobile all closed three locations.

This KeyPoint Report examines changes in supply, vacancy and absorption, retailer activity, and market composition by store size and retail categories during the period from July 2017 to July 2018. The study area includes 39 cities and towns, representing more than 835 square miles and approximately 567,500 permanent residents (42% of the state population).

Posted by KeyPoint Partners at 10:38 AM No comments:

New Business: VP of Leasing Michael Branton and Leasing Associate Patrick Busa are handling leasing for 47-53 Long Pond Road, an 8,614 s/f center adjacent to The Grove in Plymouth, MA.
Posted by KeyPoint Partners at 10:36 AM No comments:

US retail sales rose 0.5% in June, Commerce Department figures showed, capping a quarter that probably saw consumer spending pick up after a tepid start to the year. Excluding purchases of autos and gasoline, sales climbed 0.3%. A tight labor market and lower taxes have supported solid gains in household purchases, the biggest part of the economy. Economists expect the pace of gains in household purchases to settle back in coming quarters. Among retailers still reporting monthly sales, L Brands was up 3.0% and Costco was up 9.7%.
Posted by KeyPoint Partners at 10:35 AM No comments:

Chick-fil-A will launch its own line of meal kits called Mealtime Kits, to be tested at 150 of the company’s locations across the Atlanta area beginning in August. Party City will open about 50 Toy City pop-up stores this year alongside its Halloween City pop-up shops…Millstone Capital Advisors announced its purchase of the Native Foods Café fast-casual restaurant chain, which has 13 restaurants in California, Colorado, Oregon, and Illinois…Rent-A-Center will be taken private by buyout firm Vintage Capital Management in a $1.37 billion deal including net debt…Barnes & Noble will open several new, smaller 14,000 s/f prototype stores this year, which will feature a new design. Barnes & Noble operates 630 bookstores nationwide... Coffee Bean and Tea Leaf aims to more than triple its number of US cafes by 2028. A franchisee will open a store in NYC later this year, with a total of 100 new locations planned in NY by 2028. The chain has 311 stores in other parts of the US…Automotive styling franchise Tint World aims to have 300 stores open by 2025, a 400% increase from its current footprint of about 60 locations…Smoothie King, which operates nearly 1,000 locations worldwide, has a deal with a franchisee to develop 60 locations in new markets. The chain expects to open 150 new US locations in 2018, the most ever opened in a single year…Five Below ended 2017 with 625 stores, having grown by 103 net units. For 2018, the plan is 125 stores. The company is on track to open its 1,000th store by 2020...Arby’s has opened of its 1,000th Inspire design restaurant. With the completion of the Pearland, TX restaurant, nearly 1/3 of Arby’s 3,400 restaurants features the new design…Golden Gate Capital has acquired The Learning Experience, which has more than 300 locations operating or under development…Macy’s will open about 60 new standalone Bluemercury stores through 2019. The growth will bring Bluemercury’s store count to about 220...Primark is opening a 9th US store in Brooklyn, NY.  The company opened its first US store in Boston in 2015 and has locations in PA, NJ, CT and NY. The retailer plans 2 more US stores this year. Primark operates as Penney’s in Ireland and has 352 stores in 11 countries... High Bluff Capital Partners, parent company of Quiznos, has acquired fast casual Taco Del Mar. Terms of the transaction were not disclosed. There are currently more than 100 locations in the US and Canada...Athletic wear retailer Fabletics will open 75 new stores, bringing its total to 100…Seafood restaurant Slapfish will open up to 10 additional locations by the end of the year. The company now has 13 units…J.C. Penney will open a multi-level, 75,000 s/f store at Kings Plaza shopping center in Brooklyn, NY in August...uBreakiFix opened 38 new stores in the second quarter, marking a 58% increase over last year’s second quarter growth. These bring the brand’s total to 408 stores across North America. Between July 1 and September 30, uBreakiFix expects to open 35 new stores...Dollar Tree celebrated the opening of its 15,000th store this month...Domino’s wants to open about 2,350 more stores over the next 10 years. Currently, there are about 5,650 US Domino’s locations...Starbucks will open its first US “signing store” in October, in Washington, D.C., near Gallaudet University, the world’s only university designed for deaf and hard of hearing students. All employees will be required to be proficient in American Sign Language (ASL)…Moe’s Southwest Grill will expand in Boston and Philadelphia. Moe’s currently has 700 US franchised locations…Jennifer Furniture will open 5 showrooms in New York and New Jersey and more next year…Schlotzsky’s is converting its 400-plus units to “fast fine”, adding “Austin Eatery” to its name and serving beer and wine. Today there are 18 Austin eateries already converted. By the end of 2019, all 400-plus units will be Austin Eateries...Orangetheory Fitness opened its third  Portland studio, the franchise company’s 1,000th  location. The company has a goal of 2,500 studios by 2020.
Posted by KeyPoint Partners at 10:34 AM No comments:

10 more Sears and Kmart stores have been added to the list of locations slated for closure in September. With the additions, a total of 78 stores – 62 Sears and 16 Kmart locations – will close in September.  Sears Holdings has closed more than 500 stores over 15 months through the end of its fiscal quarter on May 5... Rockport has agreed to sell itself in bankruptcy to private equity firm Charlesbank Capital Partners. Rockport expects the sale, which will require court approval, to close by July 31...The Fresh Market Inc. plans to close 15 stores in 9 states...Women’s clothing retailer Annie Sez plans to either close its remaining 10 locations or convert them to Mandee stores...Toys “R” Us announced that its subsidiary, Toys “R” Us Property Company (Propco), has hired Raider Hill Advisors to oversee the sale of approximately 284 properties in 46 states..TRT Holdings, owner of Gold’s Gym, is moving out of the health club business to focus on its core business, Omni Hotels & Resorts, and will sell the fitness chain. Gold’s Gym has more than 700 locations across six continents.
Posted by KeyPoint Partners at 10:33 AM No comments:

L.L. Bean will open its 6th MA store at the Mountain Farms Mall, Hadley, MA in fall 2019...Wetzel’s Pretzels will open 2 to 3 MA stores within the year, and another 10 to 15 over the next 3 years. The company has over 340 total locations, a majority on the West Coast. It already has 4 stores in MA. Activewear retailer Outdoor Voices  opened a store in Boston’s Seaport District, its first New England location and 8 in the US.
Posted by KeyPoint Partners at 10:32 AM No comments:

Marketplace at Burlington, the 1.5 million s/f  former Burlington Center Mall in New Jersey, will close in September when its last surviving tenant, Sears, closes. Under consideration for redevelopment is a mixed-use development including retail, or a warehouse park... New Victoria’s Secret and Bath & Body Works stores opened this month at University Mall, South Burlington, VT.  The long-time tenants’ expansion and relocation is one of several initiatives to re-merchandise the Mall, including leases with Target, H&M, and Shoe Dept. Encore to open stores this year. UMall is Vermont’s largest enclosed mall at more than 610,000 s/f... Edens LLC offered a first glimpse of a proposed makeover of the Woburn Mall, which includes 400 apartments, an 8-screen cinema, and an open-air concept that calls for 175,000 s/f of retail space. Under the preliminary plan, T.J. Maxx and DSW will be relocated to newly-constructed buildings connected by pedestrian walkways and outdoor green spaces. Edens hopes to complete work on the makeover by November 2019.
Posted by KeyPoint Partners at 10:31 AM No comments: 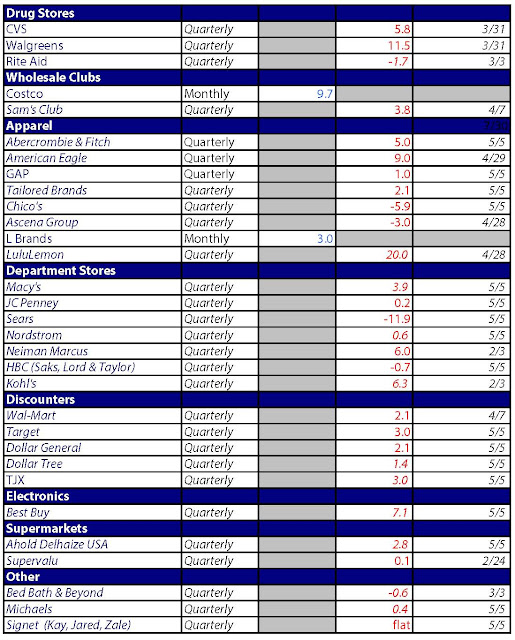 Notes: figures gathered from individual company websites, press releases, and Federal filings.  Not all companies report all figures; results not reported will be marked “n/r”. Quarterly results will be updated when available; quarterly figures are shown in italics. Figures from companies not calculated to one decimal point automatically received an ending digit of 0.
Posted by KeyPoint Partners at 10:30 AM No comments:

Source: U.S. Department of Commerce - commerce.gov
Posted by KeyPoint Partners at 10:28 AM No comments: 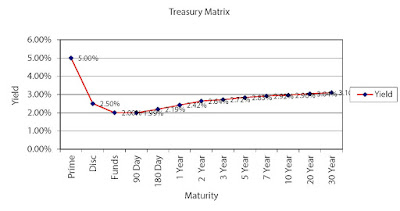 Treasury Yield Sources:  federalreserve.gov; ustreas.gov
Posted by KeyPoint Partners at 10:27 AM No comments:

Source: The Conference Board - www.conference-board.org
Posted by KeyPoint Partners at 10:23 AM No comments:

Source: Institute for Supply Management - Manufacturing Report on Business - www.ism.ws
Posted by KeyPoint Partners at 10:22 AM No comments: