The 2018 KeyPoint Report on the retail real estate market in Eastern Massachusetts/Greater Boston is in production, and will be released very soon. This year’s report includes a special section on the status of traditional enclosed malls in the region. Have malls fared as badly as the business media would have us believe? It appears that, at least in this region, they’re actually holding their own. Here’s a brief excerpt from our special section:

The volume of noise that’s been heard in the media regarding a retail apocalypse is directed at enclosed regional shopping centers as much as any other segment of retail. For malls in Eastern Massachusetts, however, conditions are not so dire. In fact, malls are relatively stable in this region compared to other parts of the country. There are 52 mall-based department stores among the 17 regional enclosed shopping centers in the region. Only eight of these stores are vacant, including four Sears units and two Macy’s stores. JCPenney has only one vacant unit and the liquidated Rhode Island based Apex chain accounts for the other. Three vacant department stores are located at Silver City Galleria in Taunton. Consequently, Silver City has the highest vacancy rate among Eastern Massachusetts malls when department stores are included. Swansea Mall, with two vacant department stores, has the second highest vacancy rate in the region.

Of the vacant department stores, five closed in the past year: three Sears units and two Macy’s stores. As a result, total mall vacancy increased in the region from 8.8% in 2017 to 13.0% in 2018. The vacancy rate among mall shops ended the year at 13.3%. No single retail chain closed more than three locations in the past year, however, indicating relative stability among mall shops in 2018. In Eastern Massachusetts, at least for now, malls don’t seem to be quite the endangered retail species many would have us believe. 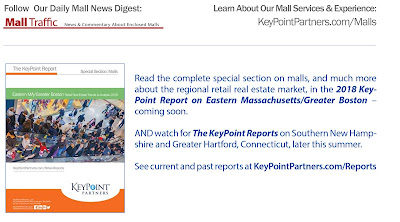 Posted by KeyPoint Partners at 11:06 AM