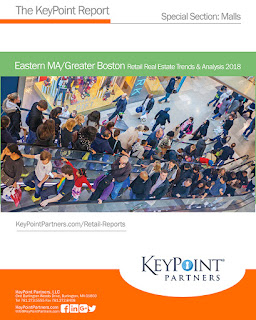 The 2018 KeyPoint Report for Eastern Massachusetts/Greater Boston, based on our proprietary GRIID™ retail database, is in production and should be available by the end of June. While you’re waiting, here’s a preview - but consider these results preliminary and subject to change:

Vacancy Rate: Eastern Massachusetts experienced a substantial rise in the vacancy rate to 9.5% this year from a level of 8.6% in 2017, reflecting a 11.3% increase in unoccupied space. At the same time total inventory ended the year at 196.4 million square feet, a gain of 1.0%, nearly the same square footage as the increase in vacant space. This resulted in a nominal negative absorption rate of only 21,900 square feet. A considerable number of large format store closings and chain liquidations were responsible for the disappointing outcome, which could have been even worse without a significant number of retail conversions to non-retail space cushioning the impact.

Size Classifications: Where most size classifications yielded lower vacancy rates last year, Eastern Massachusetts saw a reversal of fortune in 2018. Vacancy rates in all categories except 200,000+ SF (which represents only 1.6% of the retail inventory in the region) increased this year. Worst hit was the 25,000-49,999 SF classification, which includes many of the Toys R Us and Benny’s vacant boxes resulting from chainwide liquidations. If there’s a silver lining, it’s that the under 2,500 SF classification, largely mom-and-pops, was least impacted, which hasn’t been the case in recent history.

Town Rankings: The five communities encompassing the most retail space remain the same for the third year in a row, with Boston and Cambridge maintaining their dominance in first and second position. Natick, Burlington, and Brockton follow. Westwood made the leap from 32nd place in 2017 to the top spot in the region for lowest vacancy rate, coming in at a scant 1.6%, thanks largely to HomeSense occupying a vacant Sports Authority box at Westwood Station.  Filling out the top four communities are North Andover, Stoneham and Somerset, which were not even in the top ten a year ago. Taunton had the highest vacancy rate in Eastern Massachusetts for the second straight year, ballooning more than 1,000 basis points to 29.9% as a result of the Sears closing at Taunton Galleria. 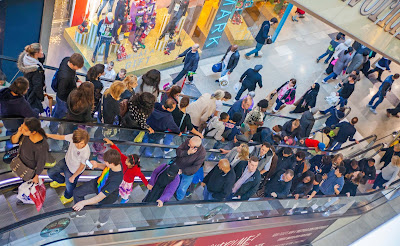 Retailer Activity: The retailer gaining the most retail space in the region was Wegmans, adding a two-level store at Natick Mall and a second unit at the redeveloped Meadow Glen in Medford. In second place was 7-Eleven, completing its brand conversion from Tedeschi Food Shops which it acquired in 2015. Market Basket rounded out the top three by adding new stores in Lynn and Fall River. By number of new units, 7-Eleven added 68, the most of any retailer. Metro PCS was a distant second, adding 16 stores while another wireless provider, T-Mobile, increased its store count by 14 locations.

With the Toys R Us liquidation imminent, all locations are considered closed for the purpose of the Eastern Massachusetts report. As a result, this once formidable toy store operator tops all retailers for largest space reduction. Sears closings in Burlington, Dedham, and Taunton placed this department store firmly in second place. Tedeschi Food Shops follows in third. Tedeschi Food Shops also led all retailers with the loss of all its 107 remaining stores, most of which are now 7-Eleven. Payless ShoeSource trailed with 18 store closings followed closely by Subway, dropping 17 units.

NOTE: Readers can expect to see much more detail on retail changes in Eastern Massachusetts when we publish our 2018 KeyPoint Report for Eastern Massachusetts/Greater Boston. Planned for this year’s release is a special section on regional enclosed malls, widely regarded as the most troubled segment of retail today. Stay tuned!

The KeyPoint Report examines changes in supply, vacancy and absorption, retailer activity, and market composition by store size and retail categories during the year ending May 2018. This study includes 189 cities and towns, representing more than 3,500 square miles (44% of Massachusetts’ land area) and approximately 5.2 million people (76% of the state population).


The KeyPoint Reports for 2018: coming soon!

Posted by KeyPoint Partners at 12:48 PM No comments:

Posted by KeyPoint Partners at 12:43 PM No comments:

Gap will add 60 Old Navy stores this year, pushing its total to more than 1,000 US Old Navy locations by the summer. Gap, which also owns Gap, Banana Republic and Athleta, currently operates more than 3,500 stores globally…Value-priced French sporting goods retailer Decathlon, which operates 1,500 locations across 40 countries, opened an 8,313 s/f  “lab” store on Market Street in San Francisco. This is not Decathlon’s first foray in the US. It entered the US market in 1999 when it acquired 18 MVP Sports stores, but ended up closing the stores and leaving the US in 2006.. .Macy’s added 20 Macy’s Backstage locations in the first quarter as part of a plan to open 100 such outlets within Macy’s stores in fiscal 2018 and nearly double the number of locations. Macy’s is also expanding the geography of Backstage into the northwestern and southwestern US. The new locations will open in existing Macy’s stores…Roots will open two stores in the Washington, D.C., area in August 2018.  Roots operates 116 company-operated stores in Canada and 3 in the US…Turner’s Fine Furniture store is adding an 11th store in Warner Robins, GA...Smoothie King, with more than 900 locations worldwide, signed 36 new franchise agreements this quarter across 14 states that will add 36 new stores to the brand’s footprint. In 2017, Smoothie King added 147 franchise agreements, and it expects to open 150 new locations in 2018, the most it has ever opened in the US in a single year…Del Taco is adding 7 Atlanta area locations. The company has 560 stores in 14 states…Indochino is expanding its brick-and-mortar footprint by almost a third. The company will open 8 new locations during the next four months. Indochino currently has 23 stores...Duluth Trading opened 15 stores last year, and plans to open 15 more annually for the next five years. The company’s store count currently stands at 34…Del Frisco’s Restaurant Group will acquire Barteca Restaurant Group for $325 million in cash. Barteca has two brands, Barcelona, a restaurant that specializes in Spanish and Mediterranean cuisine, and Bartaco, which features “upscale street food” with bold South American, Mediterranean and Asian flavors. Del Frisco’s owns Del Frisco’s Grill, Del Frisco’s Double Eagle and Sullivan’s Steak House…Fred’s has entered into a deal with CVS Health Corp. to sell certain assets of its EntrustRx unit to a subsidiary of CVS Health for $40 million. The deal is expected to close by the end of May... Dick’s Sporting Goods will open four new stores in May. With these opening, Dick’s will have 731 Dick’s Sporting Goods stores in 47 states…Sears Auto Centers will offer full-service tire installation and balancing for customers who purchase tires on Amazon.com. The service launched at 47 Sears Auto Centers in 8 metro areas, and will be rolled out to all 400 plus Sears Auto Centers nationwide during the coming weeks. Amazon is also expanding its cashier-free Amazon Go store to Chicago and San Francisco, but did not say when they would open. Currently there is one Amazon Go store in the base of one of its Seattle skyscrapers that opened in January...Boardroom Salon for Men has opened its 30th unit at the Hill in Dallas, TX, part of an effort to expand its footprint with more than 14 locations by the end of 2019, and to grow to 92 locations in the next four years. Boardroom operates locations across Georgia, Oklahoma, Tennessee and Texas…Rooms To Go will roll out 50 outdoor furniture stores early next year and will rebrand its recently acquired Carls Patio chain as it moves full-on into the outdoor category. The stores will include a mix of standalone showrooms near Rooms To Go locations as well stores within new locations under a new format...Cinnaholic, the vegan bakery franchise, began the year with 76 US locations in development, and plans to open 3 new locations in California, 5 in Orlando, and 30 in Texas, increasing its franchise footprint to 136 locations...A.C. Moore is launching a smaller-store format, to be called A.C. Moore Essentials, next month at Westmont Plaza, NJ. It will occupy about 12,000 s/f compared to 18,000 - 20,000 s/f for a conventional outlet. A.C. Moore currently operates more than 130 stores.
Posted by KeyPoint Partners at 12:42 PM No comments:

Subway will close about 500 more US stores in 2018. Last year, more than 800 stores went dark, with the total US count dropping to 25,908...Rockport Group has filed for Chapter 11 bankruptcy protection. The company’s brands include Rockport, Aravon and Dunham. Rockport hopes keep its shoemaking business alive in a sale to a private equity firm, but may be forced to close all of its retail stores, including 27 in the US.
Posted by KeyPoint Partners at 12:41 PM No comments:

MA restaurant chain 110 Grill opened a new location in downtown Worcester this month. The company has 13 locations in Massachusetts and New Hampshire and plans 10 more in the coming year…Wegmans unveiled its two-story megastore at the Natick Mall in Natick, MA this month. The store has three “firsts”: the first Wegmans with shopping on two levels; the first to feature Wegmans’ new restaurant concept, Blue Dahlia Restaurant & Tequila Bar; and one of the first Wegmans to have a “cart escalator” to carry carts between the first and second levels.  Wegmans entered New England in 2011. This is its sixth in the region...Night Shift Brewing’s new 12,000 s/f downtown space on the bottom floor of the Converse headquarters at 1 Lovejoy Place will feature a taproom, restaurant and coffee shop...Smith & Wollensky’s will close its flagship restaurant in The Castle at Park Plaza on Boston’s Arlington Street. The Medford-based steakhouse chain plans to open its first non-urban location in Wellesley. Smith & Wollensky Restaurant Group has 8 locations, including one in New York City, one in London, and a second Boston location on Atlantic Wharf...Global Partners LP will purchase the retail fuel and convenience store assets of Champlain Oil Co. Inc. The acquisition includes 37 company-operated gas stations with Jiffy Mart-branded convenience stores in Vermont and New Hampshire, and approximately 24 fuel sites that are either owned or leased. Global Partners runs approximately 1,500 locations, primarily in the Northeast.
Posted by KeyPoint Partners at 12:39 PM No comments:

GNC Holdings, Inc. plans to close some 200 stores this year, depending on the outcome of lease renegotiations or relocation opportunities, which are ongoing, and expects few new stores to open this year. Sears is closing 40 more stores, including 31 Sears stores and 9 Kmart stores in 24 states, in addition to the 166 stores the company said it would close this year. Most will close in July and August..Simon Property Group met with the Burlington, MA Planning Board to discuss a proposed project for the former Sears and Sears Automotive sites at the Burlington Mall. The plan calls for expanding the mall corridor into the existing Sears space and creating numerous small retail and restaurant locations, and demolishing the Auto Center to create a 35,000 square foot building for small retail and restaurant locations. There will be pedestrian-friendly connections between the two buildings and improvements to landscaping and greenspace. Simon  and Marriott International plan to develop 5 hotels under various Marriott brands at Simon shopping centers over the next few years, two in Florida, and one each in New York, Texas and Tennessee. Currently there are more than 15 Marriott-branded hotels at Simon properties.

Posted by KeyPoint Partners at 12:39 PM No comments: 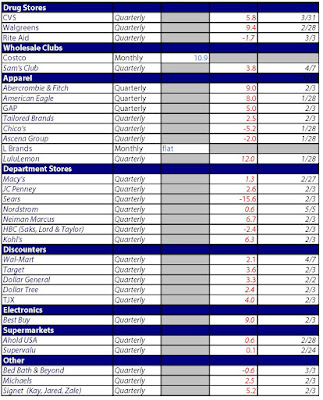 Notes: figures gathered from individual company websites, press releases, and Federal filings.  Not all companies report all figures; results not reported will be marked “n/r”. Quarterly results will be updated when available; quarterly figures are shown in italics. Figures from companies not calculated to one decimal point automatically received an ending digit of 0.
Posted by KeyPoint Partners at 12:35 PM No comments: 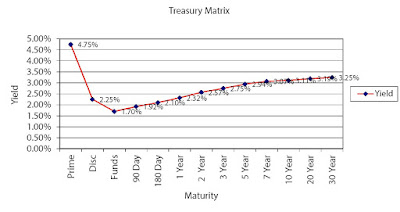 Source: The Conference Board - www.conference-board.org
Posted by KeyPoint Partners at 12:32 PM No comments: