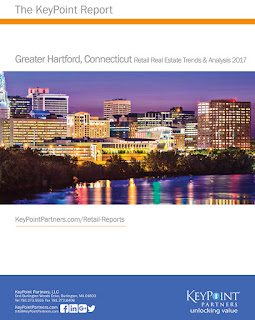 With the releases of The KeyPoint Reports on Eastern Massachusetts/Greater Boston and Southern New Hampshire behind us, it’s time to move on to the report for Greater Hartford, Connecticut, based on our proprietary GRIID™ retail database. As with the other reports, our modus operandi is to share some of the regional highlights while the complete version is still “baking.” In Greater Hartford, the 2017 retail market was a relatively stagnant one.

Retail Inventory and Vacancy: Total retail space in Greater Hartford currently totals 37.6 million square feet, a nominal increase of 25,600 square feet from last year - in today’s environment, limiting new development should be regarded as means of stabilizing brick and mortar vacancy which has remained at frustratingly high levels for nearly a decade now.

Unfortunately, the region was unable to reduce vacant square footage during the past year, remaining virtually the same. While some retailers targeted Greater Hartford in their expansion plans in 2017, this growth was offset by a number of store closings, and bankruptcies in some cases, which resulted in the vacancy rate remaining unchanged at 11.1%. Although significantly below the peak level of 13.1% in 2013, shifting spending habits toward online purchases continue to impact retail real estate in Greater Hartford as it generally has across the U.S. As a result, net absorption in the region was nominally positive this year at 24,800 square feet.

Size Classifications: During 2017 changes in vacancy rates among size classification were mixed. First the good news: two size segments between 10,000 and 49,999 square feet showed significantly lowered vacancy rates, the latter (25,000-49,999) by 3.3 percentage points. The 2,500-4,999 SF vacancy rate also declined by 100 basis points. The bad news is that the 50,000-99,999 SF classification had a jump in the vacancy rate from 8.0% to 10.8%, impacted by two big box closings, Sears in Enfield and Bob’s Stores in Manchester. The other segment to experience a significant rise in the vacancy rate was the 5,000-9,999 SF classification, increasing 190 basis points. The remaining three size ranges experienced little to no change. Although Sears closed a store in the 100,000-199,999 SF bracket, the site was already earmarked for redevelopment and, as a result, Sears is not reflected as vacant space in the data. 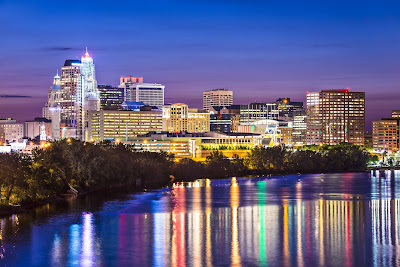 Regarding vacancy, lowest rates were found in Newington and Rocky Hill, both under 4.0%. Farmington, Plainville, and West Hartford follow, respectively. Among towns with the highest vacancy rates, only East Windsor finished above the 20% level, coming in at 24.6%. The vacant Walmart and Showcase Cinema buildings are the biggest culprits impacting retail vacancy in this community. The top ten towns have vacancy rates of 10.0% and higher.

Sears continued its downward spiral, contracting by 242,600 square feet with store closings in Enfield and West Hartford. While the Enfied store remains vacant, West Hartford is under redevelopment and will be called The Corbin Collection, which will include REI, Saks Off 5th, and Buy Buy Baby among others. The First Niagara Bank sale removes this namesake and its 72,500 square feet from the region. The closing of Bob’s Stores in Manchester ranks this retailer third in square footage decline. First Niagara also led the pack in store reduction with 20 locations. Radio Shack closed its remaining four units, placing it in a tie with Ruby Tuesday for second place.

The KeyPoint Report examines the retail real estate marketplace for Greater Hartford, Connecticut, with a focus on changes between August 2016 and August 2017. This report provides an analysis of changes in the region’s retail activity and examines supply, vacancy and absorption, retailer activity, and market composition by store size and retail categories. The Greater Hartford market includes 26 cities and towns and represents more than 835 square miles. The complete report contains much more detailed information on these categories and more, and will be available soon at KeyPointpartners.com. 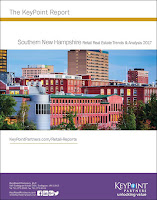 The NH Report is here!

Posted by KeyPoint Partners at 8:12 AM No comments:

Posted by KeyPoint Partners at 8:09 AM No comments:

US retail sales fell unexpectedly in August as Hurricane Harvey likely depressed auto purchases. Among retailers still reporting monthly sales, L Brands was down 4.0% and Costco was up 7.4%. See our sales reports below...The biggest retail deal of 2017 has been cleared by the FTC, after shareholders of Whole Foods voted to approve the grocer’s $13.7 billion acquisition by Amazon...Staples Inc. is no longer a public company after Sycamore Partners  completed its $6.9 billion acquisition.
Posted by KeyPoint Partners at 8:08 AM No comments:

Dollar General opened its 14,000th store last month in Middle Paxton Township, PA…DTLR Inc. is merging with urban lifestyle retailer Sneaker Villa Inc. to form a new entity that will comprise nearly 240 stores - 110 pre-existing DTLR outposts and 120 Villa stores - in 20 states…Sprint is turning 350 RadioShack locations into Sprint stores. In 2015, Sprint moved into 1,435 RadioShack stores to share space with the electronics seller, which had just filed for bankruptcy protection...Mobile payments processor Square has opened a store, Square Showroom, in Manhattan, that provides support for merchants using its technology and space to display its POS hardware…Ulta Beauty will open 100 new locations in 2017. It will also remodel 11 stores and relocate 7 others. As of July 29, 2017, Ulta Beauty operated 1,010 retail stores across 49 states... Private equity firm JAB Holding Company has entered into an agreement to buy Bruegger’s Bagels from Le Duff America, parent of la Madeleine French Bakery & Cafe. Terms of the transaction were not disclosed. JAB’s US holdings include Peet’s Coffee, Caribou Coffee, Krispy Creme, Stumptown Coffee Roasters, Intelligentsia Coffee and the Keurig Green Mountain, and Panera Bread...Wahlburgers has partnered with Hy-Vee grocery stores to open 26 restaurants. Hy-Vee also plans to add select menu items to all 84 Hy-Vee Market Grille restaurants. The move makes Hy-Vee the largest single franchisee of Wahlburgers, which currently has 17 locations in 9 states and in Canada. Hy-Vee plans to open its first Wahlburgers restaurant in West Des Moines, Iowa, in mid-2018. Hy-Vee Inc. has more than 240 retail stores across 8 Midwestern states…Dyson Ltd. will open a Dyson Demo store this fall in Toronto. Also in the works: a store on 5th Avenue in Manhattan, and one in San Francisco’s Union Square. In August, it launched a partnership with Best Buy, opening in-store shops in 90 Best Buy stores. Dyson debuted its freestanding store concept in London last year…Mattress startup Casper is opening pop-up retail stores that will be open through spring 2018 in New York, Los Angeles, Chicago and 12 other major metropolitan areas, Casper’s first foray into its own physical retail locations. Shoppers have been able to test Casper products in West Elm and Target stores…Dick’s Sporting Goods will open 10 Dick’s and Field & Stream stores in 8 cities during the first half of September. Dick’s will have 711 namesake locations and 34 Field & Stream locations across the country...Kohl’s will open 1,000 s/f Amazon shops next month in 10 Chicago and Los Angeles stores, where customers will be able to buy Amazon Echos, Fire tablets and other gadgets. Kohl’s has more than 1,100 US stores...Gymboree Corp. won court approval to exit Chapter 11 bankruptcy by the end of the month. Gymboree had filed for bankruptcy in June 2017 with a plan to close 375 to 450 stores. As of April 29, 2017, the Company operated a total of 1,281 retail stores...Japanese lifestyle brand Muji has opened a 7,300 s/f store in the Williamsburg section of Brooklyn, the retailer’s 7th store in greater NYC. Muji has 6 locations in California, one in New Jersey and one in Boston, and plans to add more US stores next year. Muji has over 800 global locations…Sandwich chain Melt Shop hopes to grow to 100 locations during the next 5 years across the US and internationally via franchising. The brand currently operates 6 corporate-owned locations in New York, one at Mall of America, and one in King of Prussia, PA...Nordstrom will roll out a new line of stores, called Nordstrom Local, which will be 3,000 s/f, instead of a typical Nordstrom box size of 140,000 s/f.  Nordstrom Local will have dressing rooms where shoppers may try on clothes, but won’t actually keep inventory in stock. Instead, Nordstrom will pull merchandise from its larger stores and from its website. The first is set to open in CA on Oct. 3... Mediterranean fast-casual restaurant Cava plans to expand its chain to Austin, Charlotte and Boston in early 2018. The chain currently has 35 restaurants, and is also planning its first CT restaurant as well as new locations in existing markets DC, NY, and NJ…Online footwear brand Birdies, known for its slippers, will open its first store, on Union Street in San Francisco, this fall... Auto services retailer TBC Corp. has opened 4 new company owned locations under the NTB Tire & Service Centers and Tire Kingdom Service Centers  brands…Online shoe brand Allbirds opened its second brick-and-mortar location, in Manhattan’s SoHo neighborhood…The Kroger Co. is opening its first-ever full-service restaurant, called Kitchen 1883, to be located next to Kroger’s new Marketplace store in Union, Kentucky, in October. It will serve lunch and dinner, and brunch on weekends…Monomoy Capital Partners has successfully completed the acquisition of West Marine, the firm’s third investment of 2017 following its acquisitions of Klaussner Furniture Industries and Friedrich Holdings. West Marine has 249 stores in 37 states and Puerto Rico….Target Corp. is adding health clinics to 31 stores in Southern California. Currently, there are 4 Target Clinics, with 4 set to open in November…Nestlé has bought a majority stake in the Blue Bottle coffee shop chain. Blue Bottle expects to nearly double its store count this year to 55 outlets...Walgreens Boots Alliance has secured regulatory clearance for a revised deal under which it will buy 1,932 stores from Rite Aid. The original proposal had included 2,186 stores. The deal will enable Walgreens to dramatically increase its store footprint to about 10,000 US locations. The stores will be converted to Walgreens in phases. The transaction is still subject to other customary closing conditions. Store purchases are expected to begin in October, with completion anticipated in spring 2018.
Posted by KeyPoint Partners at 8:07 AM No comments:

Restaurant chain Tender Greens will be open its first MA location next year, a 3,000 s/f restaurant at The Street shopping center in Chestnut Hill...Brew on the Grid has opened its second MA location at 93 Windsor St., near MIT in Cambridge, the first of four locations planned for Greater Boston this fall…Pure Hockey is converting its various store banners to its namesake brand. The company will begin rebranding all of its Total Hockey and HockeyGiant stores as Pure Hockey. Pure Hockey, headquartered outside of Boston, operates four e-commerce sites and 54 stores in 18 US states...Rhode Island family-owned retail chain Benny’s is closing all 31 stores by the end of 2017. Benny’s operates stores in MA, RI, and CT.

Posted by KeyPoint Partners at 8:06 AM No comments: 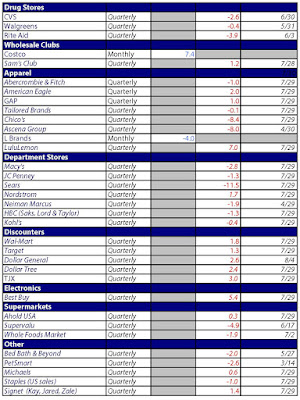 Notes: figures gathered from individual company websites, press releases, and Federal filings.  Not all companies report all figures; results not reported will be marked “n/r”. Quarterly results will be updated when available; quarterly figures are shown in italics. Figures from companies not calculated to one decimal point automatically received an ending digit of 0.
Posted by KeyPoint Partners at 8:05 AM No comments:

Source: U.S. Department of Commerce - commerce.gov
Posted by KeyPoint Partners at 8:03 AM No comments: 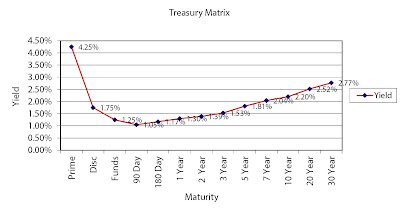 Treasury Yield Sources:  federalreserve.gov; ustreas.gov
Posted by KeyPoint Partners at 8:02 AM No comments:

Source: The Conference Board - www.conference-board.org
Posted by KeyPoint Partners at 8:01 AM No comments:

Source: Institute for Supply Management - Manufacturing Report on Business - www.ism.ws
Posted by KeyPoint Partners at 8:00 AM No comments: