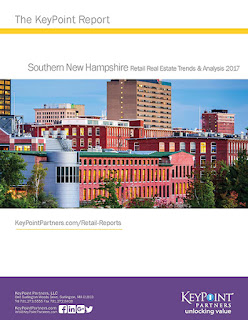 While the 2017 KeyPoint Report for Southern New Hampshire, based on our proprietary  GRIID™ retail database, is in production, we will again share some of the early results:

Inventory and Vacancy Rate: The retail inventory in Southern New Hampshire included 29.8 million square feet in 2017. This represents a net decline of 59,400 square feet, or 0.2%, resulting largely from retail demolitions and conversions to non-retail space. During the same period, retailers absorbed large chunks of vacant space in the region, dramatically reducing the level of unoccupied space by more than 400,000 square feet in Southern New Hampshire and cutting the vacancy rate from 10.5% in 2016 to the current level of 9.1%. Some of the larger retailers to fill space include Chunky’s Cinema in Manchester, Hobby Lobby in Nashua, and Ocean State Job Lot in Seabrook. Also a number of retailers plan to open in vacant space later this year, including Cardi’s Furniture and NH1 Motorplex Indoor Karting, both joining Ocean State to absorb most of the vacant Walmart space and the empty Shaw’s location at Southgate Shopping Center.

Size Classifications: It was an encouraging year across the board regarding vacancy by size. Although the Under 2,500 SF category experienced a nominal increase in the vacancy rate to 16.0%, the vacant square footage was actually able to show a nominal decline. The total inventory in the under 2,500 SF category is modestly lower however. Still, this is a segment that has been trending the wrong way for several years now and the relative stability is a positive year-end result. Three categories lowered the vacancy rate by more than 2.0%, including the 5,000-9,999, 50,000-99,999, and 100,000-199,999 SF classifications. Absorption of vacant Shaw’s, Walmart, and Lowe’s boxes had much to do with the latter two ranges. The 2,500-4,999 SF segment of the region also showed a solid reduction in the vacancy rate of 180 basis points. 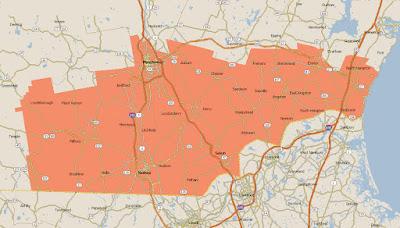 Among towns with at least 500,000 square feet of retail space, Salem remains on top of the rankings for lowest vacancy rate at 5.7%, although up a bit from last year. Derry is this year’s runner-up, moving up from fourth a year ago. Hudson slipped a notch to third place.  Among towns with the highest vacancy rate, Manchester takes over at first with13.2%, although down substantially from 16.0% last year. In fact, the five highest ranking towns had vacancy rates all lower versus last year. The Seabrook vacancy rate, which was the highest in the region a year ago at 17.8%, has been notably reduced to 9.4%, in line with the Southern New Hampshire average.

Retailer Activity: Retailers adding the most space in the region include Mattress Firm, which converted its acquired Sleepy’s locations, thereby increasing by 59,700 square feet, followed by Chunky’s Cinema, Hobby Lobby, and Ocean State Job Lot. The latter three all back-filled big box vacancy, largely contributing to the substantial decline in the region’s vacancy rate. Conversely, Sleepy’s closed the most space. Radio Shack and Namco round out the top three of retailers contracting by square footage. Mattress Firm also led the region in new stores, adding 10 units via the Sleepy’s acquisition. Cricket Wireless and Sprint were the only other retailers gaining multiple stores, three and two units, respectively. The acquisition of Sleepy’s reduced this retailer’s store count by 10 locations. Radio Shack also vacated the region, closing its last seven stores. The overstoring of yogurt shops was apparent with the closing of six Orange Leaf locations. 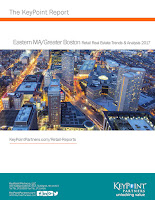 Visit KeyPointPartners.com and click on Retail Reports at the top.
Posted by KeyPoint Partners at 12:21 PM No comments:

Posted by KeyPoint Partners at 12:17 PM No comments:

Retail sales advanced 0.6% last month, the best showing since a gain of 0.9% last December, the Commerce Department reported. Sales got a boost in July from a 1.2% jump in auto sales, the strongest result since December. There were sales gains in other areas as well, including furniture stores, hardware stores and restaurants. For most of this year, retail sales have been lackluster, including a decline in May of 0.2% and a modest 0.3% June gain. Among retailers still reporting monthly sales, L Brands was down 7.0% and Costco was up 6.2%. See our sales reports on Page 4...Staples’ new private equity owner, Sycamore Partners, plans to spin off its retail operations from its corporate sales unit. In a filing with the Securities and Exchange Commission, Staples said it expects to separate its US retail business and Canadian retail businesses into two separate entities.
Posted by KeyPoint Partners at 12:16 PM No comments:

Monro Muffler Brake Inc. has signed agreements to acquire 20 stores, including 8 from an existing Car-X franchisee. 12 of the stores will operate under the Monro name, and the 8 Car-X stores will operate under that brand. The acquisitions are expected to close in the second quarter of fiscal 2018…Sephora has opened a new concept, Sephora Studio, on Newbury Street in Boston, designed to provide a customized shopping experience. At 2,000 s/f it is the brand’s smallest store in North America…Harris Teeter opened its newest and largest store in NC. The 67,000 s/f, 24-hour store features an in-store bar with local wines and 16 beers on tap. Harris Teeter was bought by Kroger in 2014...Buffalo Wild Wings opened its first small-format B-Dubs Express restaurant in Edina, MN. The company is testing the 2,500 s/f format, which seats up to 50 people, for future expansion…Tire Discounters Inc. plans to double its store network in 5 years. The company currently operates 106 US stores; that could exceed 200 by 2022. Tire Discounters plans to open 10 stores in the coming months... Fidelity National Financial Ventures LLC, parent of the 106-unit casual-dining chain Ninety Nine Restaurant & Pub, will merge that company with J. Alexander’s Holdings Inc., which operates 19 J. Alexander’s, 12 Redlands Grills, 12 Stony Rivers, and one Lyndhurst Grill…Dick’s Sporting Goods opened five stores in three different states this month: 2 namesake stores and 3 Field & Stream stores in Texas, Alabama, and Georgia. With these new stores, Dick’s will have 704 locations and 32 Field & Stream locations…Electronics accessories brand Otter Products opened a retail store, Otter Shop, in its hometown of Fort Collins, CO... E-cigarette/vapor products manufacturer VaporFi opened 19 brick-and-mortar stores in 6 US states and 2 other countries...Garden Fresh Restaurant Corp., parent of Souplantation and Sweet Tomatoes, has been acquired by two private-equity groups 7 months after the brands were sold out of bankruptcy. The 97-unit restaurant chains were acquired by Perpetual Capital Partners and CR3 Capital LLC. Terms were not disclosed. Garden Fresh has restaurants in 9 states…Iconic British brand Hunter, best known for its signature rain boots, will open its first North American store in Toronto. The 2,800 s/f store will be the third standalone location for the brand, whose boots are sold in department stores and specialty shops around the world. Hunter has two stores, one in London and one in Tokyo... Toys “R” Us will open a temporary 35,000 s/f store in Times Square, just two blocks from the chain’s flagship that closed at the end of 2015. Scheduled to open in August, the three-level store will feature life-size toy displays and a scaled-down version of the animatronic dinosaur in its former location... Bob’s Discount Furniture will open six Los Angeles-area stores early next year. Last year Bob’s opened a net of 12 stores. This year, Bob’s has opened a net 11 stores to date, and by Labor Day, it will boost its store count to 89... Hurricane BTW, a new fast casual restaurant concept developed by Hurricane Grill & Wings, plans to open more than 100 US units over the next few years. The first Hurricane BTW prototype will open in West Palm Beach, FL... Online made-to-measure retailer Indochino expanded its brick-and-mortar footprint with its largest location to date, a 4,100 s/f space at King of Prussia Mall, King of Prussia, PA. The Canadian retailer previously opened its second NYC location, and flagships in Chicago and Washington, DC. Earlier this year, the company opened two storefronts in Canada. It currently has 17 stores in North America. .. TJX Companies Inc. plans to open 260 new stores this year, increasing its total worldwide by nearly 7%.  The off-price retailer currently has more than 3,800 stores worldwide, including Marshalls, TJ Maxx and HomeGoods. Last month it announced plans to launch a fourth chain called Homesense, whose first store opened this month at Shopper’s World in Framingham, MA. TJX plans include about 80 new US HomeGoods stores this year, up from 53 last year... Saks Fifth Avenue is debuting a new salon concept which will offer hair care, skin care, and beauty services along with a medical spa and retail. The concept will launch this fall at Saks’ store in Huntington, NY, with additional locations at Saks’ stores in Houston and Boca Raton, FL opening by 2018. The concept will open in Saks’ NYC flagship in fall 2019, and will be rolled out in 10 US Saks stores during the next two years...Red Robin expects to open about 17 stores and close 9 in the remainder of the year...Capriotti’s Sandwich Shop will open 15 new shops in 2017, and grow to 500 locations by 2025 through franchising. Capriotti’s currently has more than 100 US locations
Posted by KeyPoint Partners at 12:16 PM No comments:

DineEquity, parent of Applebee’s and IHOP, will shutter up to 135 restaurants in fiscal 2017, while also expecting franchisees to develop between 20–30 new restaurants globally. There were 1,752 total IHOP units and 1,968 Appleebee’s as of June 30...Famous Dave’s of America Inc. closed 6 company-owned restaurants, as it takes “a more aggressive approach” in closing underperforming locations. The barbecue chain is in the process of either selling corporate restaurants to franchisees or closing them. Famous Dave’s operated 35 company locations as of the end of the first quarter. It closed 3 units during the second quarter, and another 3 after the end of the period, giving it 29 company units. The closures represented nearly 20% of Dave’s company-owned restaurants. Franchisees operate another 135 units...Joe’s Crab Shack has abruptly closed at least 41 locations across 19 states.
Posted by KeyPoint Partners at 12:15 PM No comments:

Target held the grand opening of its fourth Boston area small-format store in the former Shaw’s at Redstone Plaza in Stoneham, MA…The TJX Companies debuted HomeSense, its new off-price home store concept, in August in Framingham, MA.  Three additional stores are planned by the end of 2017, two in NJ and one in Westwood, MA. HomeSense will complements its sister chain, HomeGoods, with expanded selections of large-scale furniture, lighting and art. As of April 29, 2017, TJX operated over 3,800 stores (see Accelerating News above)... Outerwear retailer Canada Goose plans to open a retail store at the Prudential Center in Boston this fall. Canada Goose merchandise can already be found at 11 Massachusetts retailers, but there are no company-owned stores in New England…Local restaurant 110 Grill, with 8 existing locations including 6 in Massachusetts and 2 in New Hampshire, plans to open at least four additional locations by the end of 2017 and six in 2018... Amazon is expanding its physical footprint in the Boston area with a pickup location at 870 Commonwealth Ave. near Boston University. Customers can pick up or drop off items at the location, a few doors down from a small-format Target store. Amazon’s announcement heralded the opening of 5 Instant Pickup spots near college campuses in California, Ohio and Maryland…Wegmans plans to hire 550 employees for its store in the Natick Mall, scheduled to open next spring. The Natick Wegmans, in a former J.C. Penney store, has direct access to the mall and will house the 134,000 s/f supermarket on two floors, including more than 100 seats for in-store dining. Another 12,500 square feet on the second floor will feature two restaurants. Wegmans is also seeking a tenant for a 45,000 s/f third floor space in the building.
Posted by KeyPoint Partners at 12:14 PM No comments: 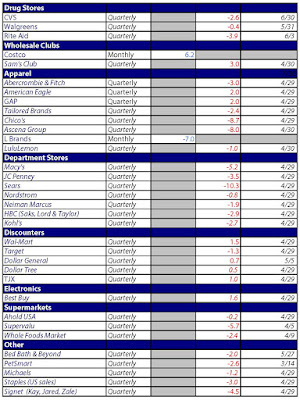 Notes: figures gathered from individual company websites, press releases, and Federal filings.  Not all companies report all figures; results not reported will be marked “n/r”. Quarterly results will be updated when available; quarterly figures are shown in italics. Figures from companies not calculated to one decimal point automatically received an ending digit of 0.
Posted by KeyPoint Partners at 12:13 PM No comments: 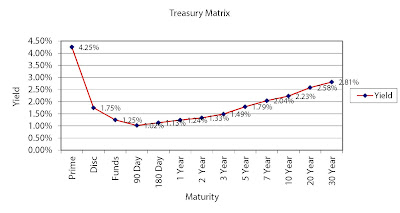 Posted by KeyPoint Partners at 12:11 PM No comments:

Source: The Conference Board - www.conference-board.org
Posted by KeyPoint Partners at 12:10 PM No comments: