Few news stories in the retail industry have caused such a huge sensation - or such an insane level of general freaking out - as Amazon’s proposed acquisition of Whole Foods. Journalists, pundits, and commentators of all stripes are falling all over themselves to explain what it all means for grocery shopping, e-commerce, real estate, the economy, and, you know, eating food. Here’s a brief compendium of just a few of the thousands of recent banner headlines, with a selection of quotes from each story (the italics are, generally, ours):

Amazon to buy Whole Foods for $13.7 billion
Market Watch, June 16
“Amazon.com Inc. said it would buy Whole Foods Market Inc. for $13.7 billion as the giant internet retailer makes a deeper push into the grocery space. Amazon will pay $42 a share for Whole Foods, valuing the grocer at a 27% premium to its closing price Thursday. The deal is expected to close in the second half of this year. Amazon’s move tanked the stocks of grocery competitors as investors worried that Amazon could do to grocery the same as it did to booksellers.”

Amazon and Whole Foods: 5 things to know about the blockbuster deal
Chain Store Age, June 17
“The food retail industry has been flush with big mergers lately, but today’s stunner has no precedent. The announcement that Amazon plans to buy Whole Foods Market for $13.7 billion heralds the coming together of two retail icons with vastly different cultures - one a mainstay of the brick-and-mortar world and the other a master of online shopping. It also creates big challenges for competitors in the wider retail landscape, especially those focusing on groceries, beauty and health.”

Amazon may have launched a bidding war for Whole Foods
MarketWatch, June 19
“Amazon.com Inc. may have a fight on its hands, because its move to buy Whole Foods Market Inc. could potentially launch a bidding war for the natural and organic foods grocery chain. Karen Short, analyst at Barclays,… believes all retailers that sell food and compete with Amazon are potential bidders, “because we think most have too much to lose not to bid.” As a result, she said potential bidders could include Wal-Mart Stores Inc. (WMT), Target Corp. (TGT) and Kroger Co. (KR), “to name a few.”

Amazon’s bid for Whole Foods sparks speculation on what it might gobble up next
Washington Post, June 20
“Amazon.com’s surprise announcement last week that it would buy Whole Foods Market for $13.7 billion sent rival grocery stocks plummeting. It also unleashed a flurry of speculation about the retail behemoth’s next move. Shares of CVS, Walgreens and RiteAid also fell Friday as drugstore chains feared that the online giant could be heading their way next...In other corners of the Internet, analysts and investors speculated that Seattle-based Amazon could be setting its sights on organic grocer Sprouts, discounters DollarTree and Dollar General, and used-goods purveyors such as Plato’s Closet and Once Upon a Child.”

How Amazon could change your Whole Foods
USA Today, June 20
There’s one big question likely on your mind now that Amazon has rung up its largest purchase ever with the $13.7 billion acquisition of Whole Foods Market: How will CEO Jeff Bezos change my local Whole Foods store?...Depending on how you shop, this deal could mean eventually you never have to set foot in a Whole Foods store again - because you would order online, drive up to the store and have your groceries stuffed in the trunk, or have them delivered straight to your front door. Or, you could make a Whole Foods your neighborhood hangout...After inputting your grocery list, someone gathers all your goodies up while you dine on pizza or a sandwich. Maybe even test the latest Alexa-powered devices

Our very simple take? Anything in any of these article could possibly be true. Until the deal is done and the dust settles, who the heck knows?! 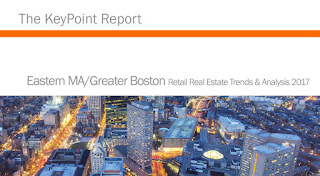 The Report is coming soon! Watch for it.
The KeyPoint Report on Eastern Massachusetts/Greater Boston 2017:
The one retail real estate report you simply have to read.
Visit KeyPointPartners.com and click on Retail Reports at the top.
Posted by KeyPoint Partners at 11:38 AM