Is The End Getting Closer for the Little Guy?

For many years we have published the KeyPoint Reports, macro-level compilations of retail real estate trends and analysis in the three New England regions that we cover in our GRIID™ database: Eastern Massachusetts, Southern New Hampshire, and Greater Hartford, CT. One area on which we focus in these reports is the change in inventory and vacancy rate by store size classification - without question the most salient finding during the past decade was the impact on small stores less than 2,500 square feet.

Let’s focus on Eastern Massachusetts, the largest region we cover: since 2006 total retail inventory has increased from 176.5 million square feet to 194.2 million square feet, a 10% increase during the past 10-year period. At the same time we’ve seen a rise in the vacancy rate from 5.6% to 9.0%, with vacant space increasing an alarming 76% in the past ten years. The modest gain in total space and the dramatic rise in vacancy relative to prior decades can be attributed largely to 1.) the abrupt slowdown in new retail construction resulting from the Great Recession, and 2.) the mounting effect of online shopping on brick- and-mortar retailing.

No one has paid the price more than the small store owners. While modest growth has occurred in total inventory between 2006 and 2016, stores less than 2,500 square feet experienced a negligible decline of 1.0%. Of more concern, however, is that during the same time frame, vacant space in that size category increased from 2.5 million square feet to 5.7 million square feet, a whopping 124% upsurge, more than 1.5 times the rate of the entire region. The table below illustrates this change relative to the overall region:

For a while the vacancy trend had started to turn the corner. Similar to the region overall, the vacancy rate in this small store category began to decline from a high of 14.1% in 2010 to 12.4% in 2013. But that was as good as it got; since then, small store vacancy has increased each year and now stands at a new high of 14.7% in 2016. The rate could have been even higher were it not for some demolition and conversion to non-retail space among small stores.

While the direct impact from the recession has past, the retail industry continues to see a consumer shift away from brick-and-mortar to online spending. The just-released Forrester’s Holiday Retail Sales Forecast estimates that online sales will account for 13% of retail sales, up slightly from its 12% share of annual retail sales, while the best forecasts of overall holiday sales increases have been in the 3-4% range. Every quarter it is commonplace for national retailers to report sales gains in the low single-digit range, but then enthusiastically report e-commerce sales of double-digit gains. It should be no surprise, then, that for years now the industry in general has been budgeting fewer dollars toward physical store expansion while reallocating capex toward improving e-commerce platforms and enhancing the overall omnichannel retail experience.

But wait a minute: how does the little guy compete in the world of e-commerce? We’re talking about the independents, the mom-and-pop operators with no more than a couple of stores. How do these guys compete with Amazon? The vast majority can’t. But does that fact really have much impact on the retail real estate layout in the region? Within Eastern Massachusetts, our data indicates that there are more than 46,000 individual tenants. Surely the small-space category accounts for only a portion of that total. Well, you’d better take a seat when I tell you the next part: Are you ready? Approximately 22,600 tenants, or roughly one-half, are one- or two-store operators with stores under 2,500 square feet.

I wish I could tell you what is going to happen in the longer term to the little guys in the smaller stores. Let me just say that we should hope for the best and plan for the worst! 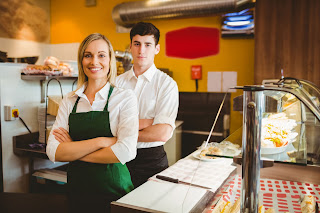 Posted by KeyPoint Partners at 8:14 AM