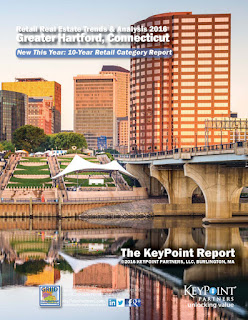 With the releases of The KeyPoint Reports on Eastern Massachusetts/Greater Boston and Southern New Hampshire behind us, it’s time to move on to the report for Greater Hartford, Connecticut, based on our proprietary GRIID™ retail database. As with the other reports, our modus operandi is to share some of the regional highlights while the complete version is still “baking”. In Greater Hartford, the 2016 retail market traveled further down the road to stability:

Retail Inventory and Vacancy: Total retail space in Greater Hartford currently totals 37.6 million square feet, a modest increase of 380,800 square feet from last year - in today’s environment, limiting new development should be regarded as a good thing. Most of the incremental gain can be attributed to the new 156,000 square foot Costco in Farmington.

At the same time the region added 421,000 square feet of vacant space, increasing the vacancy rate from 10.1% to 11.1%, which is higher than the 11.0% level experienced in 2014. As a result, absorption in the region turned negative this year by 40,200 square feet. NOTE: The other regions we study, Eastern Massachusetts/Greater Boston and Southern New Hampshire, also experienced a rise in vacancy rates this year.

Size Classifications: During 2016 the only retail size category to show a significant reduction in the vacancy rate was the 5,000-9,999 square foot range, from 12.4% to 11.3%. Macy’s closing in Enfield caused the 100,000-199,999 square foot bracket to jump up to a 5.8% vacancy rate after showing full occupancy last year. After experiencing the highest vacancy rates a year ago, the rates for two categories under 5,000 square feet went even higher this year; small independent retailers are largely to blame. However, the largest increase in vacancy rate occurred in the 50,000-99,999 square foot range, with Macy’s again playing a role with the closing of a second Enfield unit.

Regarding vacancy, lowest rates were found in Rocky Hill, Newington, and Plainville, all below 6.0%. Rocky Hill was the only town below 5.0%. Farmington and West Hartford complete the top five. Among towns with the highest vacancy rates, only East Windsor was above the 20% level, an improvement from last year when three towns were above that threshold. Vacant Walmart and Showcase Cinema buildings are primarily responsible for the considerably high rate in East Windsor. East Hartford, Berlin, New Britain, and Hartford fill out the top five.

Retailer Activity: The largest retail development in Greater Hartford last year was the opening of a new 156,000 square foot Costco in New Britain. By acquiring Sleepy’s, Mattress Firm entered the Greater Hartford region and now occupies 99,600 square feet, putting them in second place. Ashley Furniture Homestore opened a 42,600 square foot store in Newington in the space formerly occupied by T-Bowl Lanes bowling alley to round out the top three retailers adding square footage in the region. In the ranking of retailers by added stores, Mattress Firm is at the top with 16 recently acquired units. Advance Auto Parts netted four stores via the Carquest acquisition. O’Reilly Auto Parts and Sport Clips followed, each adding three new units.

As previously mentioned, Macy’s closed two stores in Enfield at Enfield Mall totaling 237,700 square feet, the largest contraction of space in the region. The acquisition by Mattress Firm removed 116,100 square feet of Sleepy’s store space from the region. Walmart closed its only Neighborhood Market location in the region, a 59,700 square foot store in West Hartford. Among retailers reducing store count in the region, Sleepy’s led the way with 19 locations. Carquest Auto Parts contracted by five stores as a result of the Advance Auto Parts acquisition. Radio Shack also reduced its store count by three units.

The KeyPoint Report examines the retail real estate marketplace for Greater Hartford, Connecticut, with a focus on changes between August 2014 and July 2015. This report provides an analysis of changes in the region’s retail activity and examines supply, vacancy and absorption, retailer activity, and market composition by store size and retail categories.

The Greater Hartford market includes 26 cities and towns and represents more than 835 square miles. The complete report contains much more detailed information on these categories and more, and will be available soon at KeyPointpartners.com.


Posted by KeyPoint Partners at 9:14 AM