While the 2016 KeyPoint Report for Southern New Hampshire, based on our proprietary  GRIID™ retail database, is in production, we will again share some of the early results: 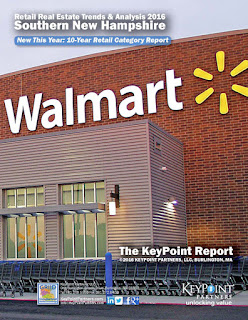 Inventory and Vacancy Rate: The retail inventory in Southern New Hampshire included 29.8 million square feet in 2016. This represents a net decline of 109,400 square feet, or 0.4%, resulting largely from retail demolitions and conversions to non-retail space.  There were significant new store additions, however, negating most of the reduction in square footage within the region. The single largest new development was Walmart Supercenter in Manchester, replacing a nearby traditional store which will be converted to Carmax. The largest demolition in the region was the former Macy’s building in Bedford. This site will be redeveloped as a mixed-use project dubbed Bedford Place, including retail, office, medical and restaurant space.

Another major change that will occur is the planned 10-screen Chunky’s theater that will occupy a significant portion of the former Lowe’s in Manchester. The former Lowe’s has been available since 2011. A number of closings in Southern New Hampshire during the past year resulted in an increase of 256,700 square feet of unoccupied space in the region, jumping the vacancy rate from 9.6% to 10.5%, about the level experienced in 2014. Two-thirds of the incremental gain can be attributed to the recent closing of four Sports Authority stores.

Size Classifications: Looking at vacancy rates by store size, it was not encouraging to see all categories less than 100,000 square feet showing a rise in vacancy rates between 2015 and 2016. However, the 50,0000-99,999 square foot segment was impacted by a reduction in vacant square footage in the 135,197 square foot Lowe’s vacancy (noted above), resulting from Chunky’s commitment to occupy a portion of this unit. Consequently, the 100,000-199,999 square foot classification now has less vacancy than last year. Not surprisingly, the vacancy rate in the 25,000-49,999 square foot bracket showed the sharpest rise with the four vacant Sports Authority stores included in this size range. Vacancy among smaller independent retailers continues to troublesome as both classifications less than 5,000 square feet have significantly higher vacancy rates this year versus last.

Among towns with at least 500,000 square feet of retail space, Salem tops the rankings for lowest vacancy rate at 4.8%. Bedford, last year’s top-ranked community, dropped out of the top five as a result of the closing of a Hannaford store, which relocated to the former Stop & Shop in Bedford. Hudson is this year’s runner-up at 6.8%. Nashua, Derry, and Exeter complete the top five. Seabrook continues to have the highest vacancy rate in the region at 17.8%, although this figure will decline if the vacant Walmart store at Seacoast Shopping Center is acquired by Ocean State Job Lot, which has been reported. Manchester remains in second place and North Hampton moved up one spot to third.

Retailer Activity: Fitlab Fitness Club led the way in incremental space in Southern New Hampshire by acquiring and rebranding the five Gold’s Gym locations in Southern New Hampshire. A new Dick’s Sporting Goods store in Salem moved this retailer into second place. Walmart was third following a Manchester relocation of its traditional store to a supercenter prototype, netting 65,300 square feet of new retail space. Mattress Firm tied Fitlab Fitness Club for the most new store locations, both adding five units. No other retailer added more than two locations, Aldi and Orangetheory Fitness among these.  The demolition of Macy’s in Bedford caused this retailer to lose the most retail space in the region. The liquidation of Sports Authority placed this retailer in second place. Gold’s Gym was a distant third with all locations converting to Fitlab Fitness Club. Gold’s Gym was also the leader in the number of stores closed with five. Sports Authority was second with four stores and 7-Eleven followed with three units. The complete report contains more detailed information on these categories and more, and will be available soon at KeyPointpartners.com.

This KeyPoint Report examines changes in supply, vacancy and absorption, retailer activity, and market composition by store size and retail categories during the period from June 2015 to June 2016. The study area includes 39 cities and towns, representing more than 835 square miles and approximately 550,300 permanent residents (42% of the state population).  KeyPoint Partners’ GRIID™ database maintains detailed information on virtually all retail properties in three key regions: Eastern Massachusetts, Southern New Hampshire and Greater Hartford, Connecticut. These markets encompass approximately 44% of all retail space in New England. GRIID™ has information on approximately 263 million square feet of retail space and approximately 59,700 retail establishments. The KeyPoint Reports contain a summary and analysis of retail market trends and activity for each studied market area.
Posted by KeyPoint Partners at 6:53 AM