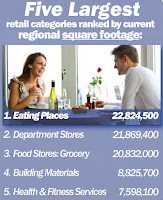 In earlier Special Sections of our KeyPoint Report for Eastern Massachusetts we’ve explored changes in the Grocery and Restaurant categories. This year we’ve analyzed 10 years of data on occupancy changes in all retail tenant categories. Here’s a preview:

It’s clear that social values, shopping habits, and lifestyle choices of shoppers in this region have changed the retail real estate landscape. For example, Eastern MA residents have no excuse for not getting enough exercise, based on growth in Health & Fitness Services during the past decade. Regional shoppers certainly love their pets, too.

The Medical & Dental Services category increased about 30% and is currently up to 1.7 million square feet. Although Sporting Goods shows a gain of approximately 13%, the Sports Authority liquidation, which will reduce inventory in the category by more than 400,000 square feet, was not factored into the change - inclusion would have placed Sporting Goods in negative territory. Book Stores and Electronics categories ended the decade with the largest declines in retail space, both shrinking by more than 40%. Space among Florists declined substantially, as did Furniture Stores and Office Supply Stores.

With respect to store count, growth in the cellular phone business drove Telephone Equipment to the top, with store count increasing by 34%. Expansion of fitness clubs throughout the region, as mentioned, has Health & Fitness Services as the second fastest growing category, increasing store count by 29%.  Grocery Stores showed very little change during the past 10 years, gaining in numbers by a nominal 1%. However, wholesale clubs, dollar stores, and discount superstores had much to do with constraining growth in this category.

The Great Recession and the rise of the internet, including the ability to shop for a house online, took a toll on housing development and related industries during the decade. Evidence of this shows up in the decline of the Real Estate category, which primarily includes residential real estate agencies. This category tied with Gift, Novelty, & Souvenir Shops for the largest decline in store count, down 34%. With the vast slowdown in home sales activity, Furniture Stores and Home Furnishings also felt the pain, reducing store counts by 31% and 27%, respectively.

The chart below tracks percentage changes in expansion/contraction by square footage of major retail tenant categories from 2006 through 2016. 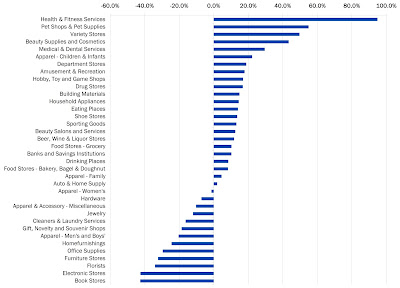 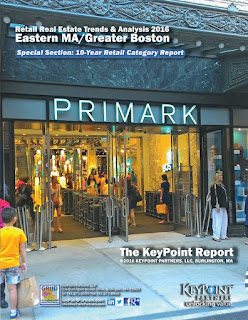 Posted by KeyPoint Partners at 8:38 AM