Another Chapter for Barnes & Noble 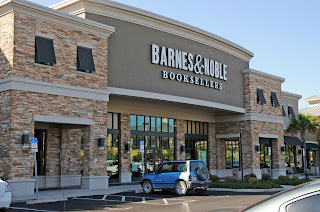 Barnes & Noble, the once formidable book store chain, has been in survival mode for quite some time. The company recently reported its third quarter sales through January 31, 2016 and again showed a decline, this time by 1.8%.

While some may have believed that Barnes & Noble sales would jump following the liquidation of Borders Books back in 2011, when 511 Borders stores went out of business, Barnes & Noble was capable of generating only a modest gain of 1.9% in 2012. Surprisingly, this gain was entirely attributable to the NOOK device. Sales at its other two divisions, Barnes & Noble Retail and Barnes & Noble College, both declined that year. Since 2012, only the college bookstore division, now an independent company as a result of a spin-off, has been able to show growth.  Barnes & Noble Retail sales, which include both brick-and-mortar store and online sales, have declined every year. The same can be said of NOOK sales, which have tanked from $933 million in FY2012 to $264 million in FY2015. At the same time, the Barnes & Noble store count has declined every year since 2010, going from 720 locations to 640 units as of January 1, 2016.

While lower sales in the third quarter were reportedly related to lower online sales and store closings, there was a ray of hope: comparable sales registered a small increase over last year of 0.2% and, without the NOOK included, comps were up 1.3%. Comp sales had not shown a gain since 2012. There is also evidence to support improvement in sales at physical book stores in general. According to the Association of American Publishers (AAP), following years of sales decline, physical bookstores last year experienced a sales increase of 3.2% and a 4.1% increase in units sold. Furthermore this comes at a time when e-book sales overall have been experiencing a generally flat growth trend. It has even been reported that independent book stores are making a solid comeback.

This sign of stabilization in shopper activity at physical book stores may bode well for landlords who fear that B&N will suffer a fate similar to Borders. The trend has been encouraging enough that Barnes & Noble recently announced it will introduce a new store concept later this year, with four stores slated to open in 2017. Without any details, I would presume that the prototype will be substantially smaller than most existing units, which currently average 26,000 square feet. Nevertheless, Barnes & Noble is still deep in the woods, with no clear path to daylight just yet. And one major reason is that the 800-pound gorilla of retailing, Amazon, is beating its chest once again. 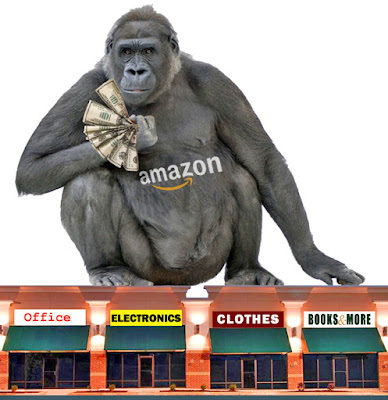 Amazon has continually applied pressure throughout its dominance of online retailing, and it’s now presenting what could be another major threat by opening its first physical retail location, a 7,500 square foot book store in Seattle, and announcing that a second unit is scheduled to open in San Diego. To rub Barnes & Noble’s face in the dirt even harder, the Seattle location is part of University Village, an upscale, open-air venue where a Barnes & Noble store closed in 2011.

Feedback on the Amazon Books store has thus far been mixed. The small-store format (relative to a typical Barnes & Noble location), for instance, limits inventory to just best sellers and books with top-rated customer reviews from the Amazon website. In order to find out whether a book is in stock, the customer has to ask; to find a price, the customer needs to use the Amazon app or in-store scanners. On the plus side, and most importantly, prices are just as cheap in-store as they are online. If Amazon is serious about developing a brick-and-mortar presence, it will likely need plenty of refinement along the way - but I doubt anyone would bet against them getting it right.

It’s likely that many readers here saw the press early last month about a statement by the CEO of General Growth indicating that Amazon would open 300 to 400 Amazon Books units, a quote that was quickly retracted. However, often where there’s smoke, there’s fire, and if Amazon Books shows reasonable success, when all is said and done, that misquote may not be all that far off the mark. For its own sake, struggling former book store giant Barnes & Noble better hope that it is.


Bob Sheehan, Vice President of Research
BSheehan@KeyPointPartners.com
Posted by KeyPoint Partners at 7:55 AM