Mixing the Good with the Bad!

It seems as if all we ever read about these days are store closings. Just this morning, we read that Sports Authority is on the brink of bankruptcy, and that 140 stores, nearly one-third of the chain, will be closing. Last month we read that Sears and Kmart will be closing more stores than previously announced, and at an accelerated rate - just another cost-cutting announcement from the corporate office. Radio Shack, Building 19, Coldwater Creek, Dots, and Fashion Bug are just a few of the retailers who have downsized and/or liquidated in recent years, and are responsible for historically high vacancy rates that have lasted nearly a decade.

We should anticipate that we’ll see some combination of Walgreens and Rite Aid closings, should tentative merger agreements come to fruition with regulatory approval from the FTC, and the same can be said for Staples and Office Depot. Of course, we can all point toward the Great Recession as a catalyst leading to the demise of many retail chains, but even with an improving economy we continue to experience fallout from the expansion of omnichannel retailing and the ongoing shift toward online purchases.

A review of Eastern Massachusetts retail store counts from the past five years within our GRIIDTM  database uncovered a number of retail chains that have experienced a significant decline of 10 or more locations, either through consolidation, acquisition by other retail firms, or liquidation. Heading the list of chains reducing store counts by more than 40 locations just since 2010 is Curves, which has been facing an onslaught of new competition during that time frame. This group also includes White Hen Pantry (acquired by 7-Eleven in 2006 and later converted), Blockbuster Video, and Radio Shack. A complete listing of chains with 10 or more closures is illustrated in Table 1 below.

While vacant storefronts are never a welcome site, they do sometimes offer opportunities to healthy retailers which are in expansion mode. A look back to 2010 shows that many chains exhibiting growth today were either not in existence yet, or were just beginning to grab hold in the region; at the same time a number of mainstays in the region continued to spread their wings with new store openings; and acquisitions were another means of entry into the region.

Led by Subway, seven chains added 25 or more new locations, including 7-Eleven, Metro PCS, Orange Leaf and others. In all, 35 chains added 10 or more locations. Among expanding categories, Fitness and Restaurants were two of the strongest. In the Fitness arena were Planet Fitness, Anytime Fitness, Get in Shape for Women, Pure Barre, and Koko Fit Club. Along with the aforementioned Subway, expanding restaurants included Panera Bread, Five Guys, and Chipotle. Coffee shops also made headway with Dunkin Donuts, Starbucks, and Marylou’s Coffee making the list. Orange Leaf and Pinkberry were at the top of the popular FroYo category, each adding more than ten stores. Personal Services continue to grow as well, with Massage Envy, Elements Massage, Supercuts, and Great Clips adding significant numbers of stores. Auto parts chains on the expanding list included Auto Zone and Advance Auto, while growing drug store chains included CVS and Walgreens. The complete list of retail chains in several categories that exhibited marked growth is shown in Table 2 below. It’s interesting, although not surprising, to note that many of the retail categories that have been growing during the past five years are those least impacted by online retailing. Conversely, a number of significantly contracting chains were greatly impacted by internet retailing – among them Staples, Borders, Radio Shack, and FYE. 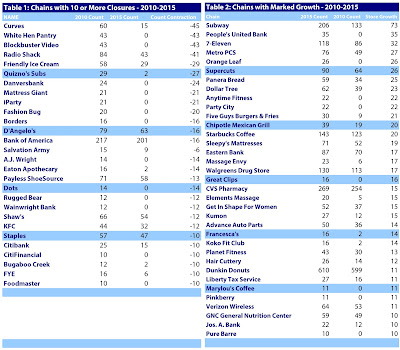 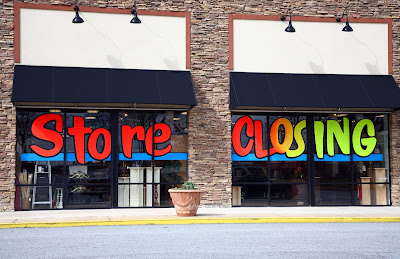 Many of the chains which have been mentioned here, it should be noted, represent small format stores. Some might argue that expansion and contraction among the larger format stores has had a much greater impact on the retail real estate landscape, since they represent the anchors that other shopping center tenants have come to depend upon to effectively draw shoppers. In a future issue, we’ll evaluate changes in square footage among larger format chains within the region, and the effect of those changes on retail occupancy. For now, we’ll continue to keep track of the latest headlines about retail contractions, bankruptcies, acquisitions, and mergers. Stay tuned.


Bob Sheehan, Vice President of Research
BSheehan@KeyPointPartners.com
Posted by KeyPoint Partners at 9:24 AM