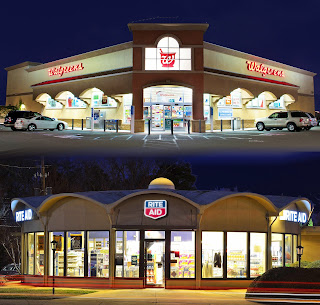 At the end of October, Walgreens surprised many of us with its announcement that it had agreed to purchase Rite Aid in an all-cash deal for $9.4 billion. If the deal is approved, it would potentially increase the chain’s total number of stores by a whopping 50%, giving it a huge size advantage over CVS.

The 7,800-unit CVS announced earlier this year that it was buying approximately 1,700 pharmacies operated by Target. Despite that, CVS will still be at a distinct market share disadvantage against a potential Walgreens-Rite Aid chain of more than 12,000 stores. At the same time, one has to wonder how many stores Walgreens will have to close in the face of FTC antitrust scrutiny before the deal is approved.

So far, reported estimates of store closings range from 400 units (a figure from Credit Suisse) to as many as 3,000 stores (based on a recent Cushman & Wakefield analysis). As part of its due diligence process, Walgreens likely completed a detailed evaluation of Rite Aid trade area overlap with that of its own stores. Walgreens indicated that it would consider closing as many as 1,000 units in some combination of the two drugstore chains, but expects the real number will be closer to 500 stores. Whether anyone, including Walgreens, believes these estimates is another story.

The disparity among estimates compelled us to take a look at both Walgreens and Rite Aid store locations across our proprietary GRIIDTM territory - Eastern Massachusetts, Southern New Hampshire, and Greater Hartford- and examine just how much trade area overlap there is within these regions. The top section of the table below shows the number of Walgreens and Rite Aid stores in each of the regions in our GRIIDTM database, as well as the percentages of each chain’s total regional store count, and compares them with national figures. In order to assess the overall impact, we identified the number of Rite Aid locations in GRIIDTM regions within quarter-mile increments of Walgreens stores, out to 1.0 mile, as shown in the lower section of the table. 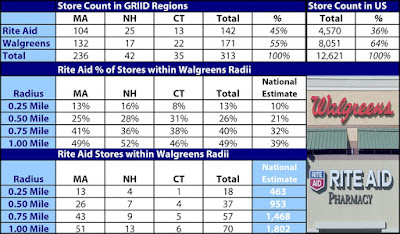 Before going further it should be noted that the ratio of Rite Aid stores to Walgreens is significantly higher in KeyPoint Partners’ GRIIDTM regions than it is nationally. There are 142 Rite Aid stores within GRIIDTM territory compared to 171 Walgreens locations, with Rite Aid representing 45% of the combined total. Nationally, there are 4,570 Rite Aid units compared to 8,051 Walgreens stores, equating to a Rite Aid share of 36% of the total count. Therefore it’s likely that we’d see greater trade area overlap between Rite Aid and Walgreens in these selected New England regions than these chains experience nationally. We adjusted for this difference when extrapolating our data to a national level.

In New England, only 13% of Rite Aid locations are located within a 0.25 mile of a Walgreens unit; but this percentage jumps to 26% at 0.5 mile and 49% within 1.0 mile. To adjust for the difference in national Rite Aid store concentration, a factor of 80% was appplied to these percentages to arrive at national percentage estimates. Aside from urban stores, drugstores generally draw shoppers effectively up to 2.0 miles or more. Although population density, traffic patterns, sales performance, profit levels, site characteristics, and the proximity of CVS locations need to factor into any strategic closing decisions, market areas for Rite Aid stores within a mile of Walgreens will overlap substantially with those of Walgreens. However, if our scaling of the GRIIDTM data to national levels is realistic, it appears that, strategically, there will be a minimum of 500 stores affected by the acquisition. After all, does operating two stores within 1/4 mile make sense?

While 3,000 closings seems grossly overestimated, there will be numerous other reasons to close stores besides proximity. Marginally performing stores, physically poor stores, lease expirations, and the like will all cause the number to rise. And when the FTC review of “monopolistic power” and the potential ability to raise prices is completed…well, who knows where the number will go? But if Walgreens really thinks they can set their cap at 1,000 store closings, they may have to think again. 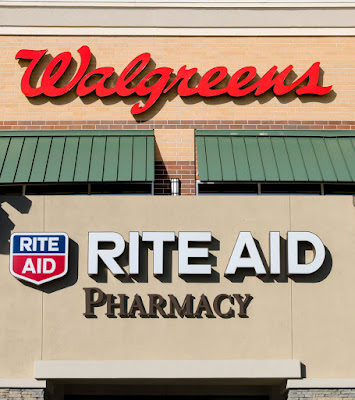 Posted by KeyPoint Partners at 11:36 AM