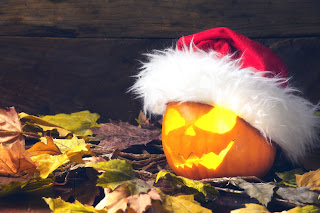 In my family we have a yearly joke about having to start Christmas shopping in August, because it’s almost “The Embers” (you know: September, Oct...ember, November, December), and The Embers go by very quickly. It’s become a cliché to note how fast one retail season rolls into another, and here we are again in the usual Halloween-to-Christmas retail whirlwind. Walk into any Michael’s store or CVS seasonal aisle and you’ll see the orange and black right next to the red and green. In that spirit, we offer you a few seasonal statistics and forecasts: 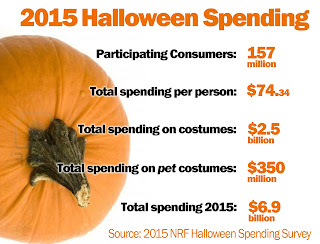 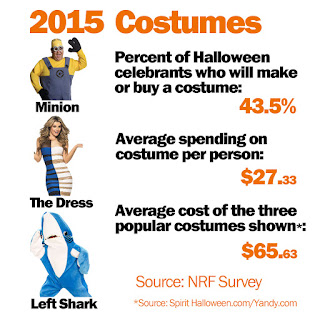 Halloween: Halloween falls on a Saturday this year, which quite likely means an increase in day-before and day-of Halloween parties. More than 157 million Americans plan to celebrate Halloween this year, according to the National Retail Federation’s Halloween Consumer Spending Survey conducted by Prosper Insights & Analytics. The average person celebrating will spend $74.34, compared with $77.52 last year. Total spending on Halloween is expected to reach $6.9 billion, compared to $7.4 billion last year. According to the International Council of Shopping Centers Halloween Consumer Spending Survey, 8 in 10 households expect to make Halloween-related purchases this holiday season, and they plan to make those purchases mainly in brick-and-mortar stores: nearly 99% plan to make an in-store purchase this year, while just over 36 % plan to have an online purchase shipped to their home, and 22% say they will buy online and pick up in-store.

Among this year’s “buzzworthy” costumes: Sexy Donald Trump (really?!); The Internet Dress (what color(s) are/is it?); Pizza Rat; Caitlyn Jenner; Lion-Hunter Dentist; Minions of all sizes; and Left-Shark, breakout star of last year’s Superbowl half-time show. Another Halloween economic note: this year’s pumpkin crop is significantly decreased due to heavy floods, causing a nationwide shortage. Libby's, the canned-food company known for its pumpkin-pie filling, reports that supplies are down by a third this year.

The Holidays: Not everyone objects to the “ever-earlier holiday push”, according to CNBC: “a slew of consumers having already started, and in rare cases, already finished, purchasing their holiday gifts. [A] study conducted by CreditCards.com over Labor Day weekend found that roughly one in seven, or 32 million Americans, have already begun buying for the holidays. The study also found that 2% of all consumers - about 4.6 million people - have already crossed everything off their list.”  For those of us who have yet to even think about making a list, that’s impressive. 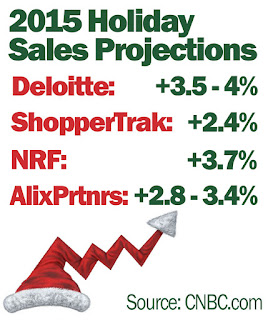 In general, industry forecasters are looking for only modest increases in holiday retail sales. AlixPartners predicts holiday sales will rise between 2.8 and 3.4%, compared to 4.4% growth last year. Deloitte's holiday forecast calls for a sales increase of between 3.5 and 4%, below last year's 5.2% gain. ShopperTrak expects sales to rise 2.4%. Last year, ShopperTrak said holiday sales increased 4.6%, topping its forecast for 3.8% growth and representing the biggest gain since 2005, when sales registered 5.2% growth. The National Retail Federation projects that total holiday sales will increase 3.7%, and that holiday online sales will increase between 6% and 8%.

CNBC points to “ a tightening labor market, rising home values and seasonal gas prices that have hit an 11-year low. On the other end is an uncertain stock market, slowing global growth, and a consumer base that is shelling out more on rent. The end result... is a holiday season that shouldn't cause retailers to hit the panic button - but also doesn't signal robust growth”

Stay tuned to these pages to see how accurate these prognostications turn out to be. In the meantime, we wish you and all our friends in the retail world HappyMerryHallowHolidays. 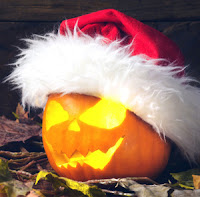 Posted by KeyPoint Partners at 8:36 AM