Are Supermarkets About to Get Sandwiched? 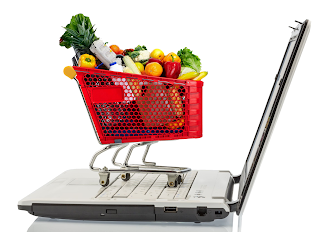 The pressure seems to be coming from all sides: online groceries, non-traditional formats, home delivery, and other trends are pushing traditional supermarket chains to work a lot harder to hold on to market share - and it’s not going to get any easier.

At one time it seemed that Grocery was the one retail category that was going to avoid the internet sales onslaught. Supermarkets were supposed to be insulated from the proliferation of online retailers that were diverting sales from other brick-and-mortar retailers.

After all, the concept of groceries arriving by mail seemed preposterous. When we consumers shop for food, we’re searching for instant gratification. When the cupboard is bare, we simply jump in car and hit the market, right? What happened to music and books and electronics could never happen to the grocery business - or so one thought.

But the buzz lately suggests things are about to change. In just the past month, several announcements have been made indicating that a number of formidable companies are getting into the grocery delivery business.

Would you order your weekly groceries online if they’d show up at your door a couple of hours later for a $3.99 delivery charge? Or would you rather fight the traffic and then line up at the supermarket check-out? Well that’s the choice Target is offering shoppers in select markets right now via Instacart.com. 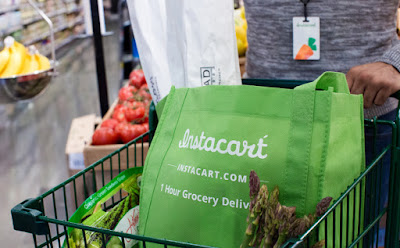 And it’s no shock that Amazon should show up wanting a share of food dollars. It’s reported that the mega-online retailer is constructing an 11,700 square foot test location in Sunnyvale, California that will allow grocery shoppers to order online and pick up at the new facility’s drive-thru lane. After a review of the pilot program, Amazon intends on opening additional locations in Silicon Valley.

Later this year tech giant Google will be testing fresh food and grocery delivery in San Francisco and another U.S. city, going head to head with Amazon and Instacart. This will be in conjunction with Google Express, a current service that already delivers merchandise, including dry food, to online consumers.

A recent survey conducted by 72 Point Inc. indicates that more grocery shoppers are increasing their online shopping. Over the past year, online shoppers have increased grocery spending by 29%, and they now do approximately 19% of all grocery shopping online. Those are telling statistics; momentum is building in online food shopping.

However, the data indicates reluctance toward purchasing fresh produce online, with 23% of online grocery shoppers avoiding fresh produce purchases all together. A majority of those that have purchased produce online in the past year indicated that they’ve been disappointed at least once in quality and freshness. It’s apparent that online grocery shopping needs some fine-tuning as it moves forward.

Unlike some sectors of brick-and-mortar retail that have been severely impacted by internet sales, it’s evident that grocery is still a different breed, and should remain one of the most viable components among physical stores. At the same time, online grocery shopping is gaining in popularity. For an aging population, and for urban dwellers who opt for life in the city without a car, online grocery shopping certainly offers an attractive alternative to traditional supermarket grocery shopping.

For a long time, the small corner market was about as competitive as it got for the traditional supermarkets. But in the past 25 years, the explosion of wholesale clubs, dollar stores, and supercenters, and now the intrusion of lower-price foreign chains such as Aldi and Lidl, have all been fighting for “at home” food expenditures, resulting in the continual erosion of market share from the guys we knew best. Now, with Instacart and other initiatives, it appears that things are about to get even tougher for the traditional supermarket.

The 2015 KeyPoint Reports for Eastern Massachusetts/Greater Boston and Southern New Hampshire are available now at KeyPointPartners.com. Click on Research Reports.
The KeyPoint Report for Greater Hartford, CT will be available within the next few weeks.

Posted by KeyPoint Partners at 12:41 PM