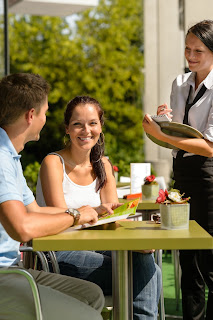 In the past five years the restaurant count in the region has rocketed to 6,946 locations, more than doubling the pace of new openings from the first half of the decade.

Much of the growth in the number of restaurants resulted from the development of fast casual chains, in addition to the phenomenal growth of Subway, which passed McDonald’s by the end of 2010 to become the largest restaurant chain in the world. Its current global store count exceeds 42,000 locations, an average of two store openings per day since 1965. In Eastern Massachusetts, Subway has added 71 locations in the ten years since 2005.

While Subway is in a class all by itself, in the next tier are fast casual chains Chipotle, Panera Bread, and Five Guys, which combined for more than 100 new locations since 2005. Neither Chipotle nor Five Guys operated stores in the region until 2007 and 2008, respectively.
Other chains showing notable growth since 2005 include Boloco, Qdoba, and b. good.  Figure 1, below, illustrates the change in store counts during the past ten years among restaurant chains with 10 or more locations in the region: 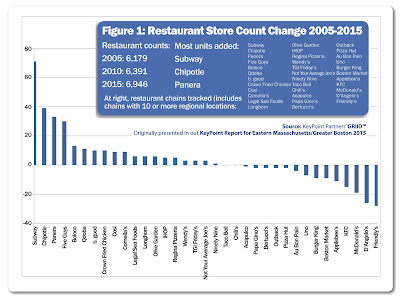 Friendly’s, D’Angelo, McDonald’s and KFC lead all restaurant chains in the region for the most closings between 2005 and 2010 in Eastern Massachusetts. Other chains losing significant market share include Applebee’s, Boston Market, Burger King and Uno. Although operational problems caused some of the fallout at these chains, the more salient issue may lie in the fact that they were not quick to adapt to consumer trends toward better eating habits and healthier lifestyles.

Looking down the road, without significant menu changes toward healthier fare, we can expect continued erosion of market share and store closings in the fast food segment.


Bob Sheehan, Vice President of Research
BSheehan@KeyPointPartners.com
Posted by KeyPoint Partners at 7:39 AM