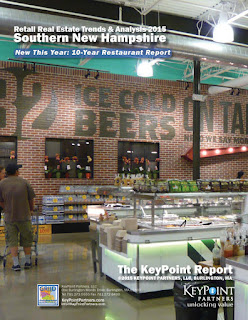 While the 2015 KeyPoint Report for Southern New Hampshire, based on our proprietary  GRIID™ retail database, is in production, we will again share some of the early results:

Inventory and Vacancy Rate: The retail inventory in Southern New Hampshire reached a level of 29.9 million square feet in 2015. This represents a modest gain of 44,113 square feet or 0.1%. Seabrook was again in the forefront of new development with the opening of Seabrook Crossing, a 145,000 square foot shopping center anchored by Hobby Lobby, only its second store in the state. This new center is located opposite last year’s showcase development in the region, the 380,000 square foot Seabrook Commons power center.
At the same time, vacant space in the region declined by more than 200,000 square feet, partially absorbed by replacement tenants and partially convertion of retail to non-retail uses. Notable is the Goodwill store that occupies the entire 64,000 square foot Stop & Shop vacancy in Hudson, 22,800 square feet of which is allocated to the Goodwill store, and a “Buy-the-Pound” warehouse outlet, only the second of its kind for this thrift chain. The balance of the space serves as a donation and distribution center. Another former Stop & Shop space in Manchester will be partially absorbed by PriceRite, the chain’s first New Hampshire store. A YMCA facility in Plaistow is another non-retail use that took over a 55,000 square foot vacancy most recently occupied by Rockingham Athletic Club. As a result, the vacancy rate in the region declined from 10.4% to 9.6% throughout the year, a healthy sign that the retail environment continues to stabilize.

Size Classifications: Looking at vacancy rates by store size, it was encouraging to see the 50,000-99,999 square foot category experience the greatest improvement with a significant drop in the vacancy rate to 10.0%, primarily attributable to the occupancy of two vacant Stop & Shop stores and a vacant health club facility in Plaistow. Only two categories experienced higher vacancy rates this year, 10,000-24,999 square feet and 25,000-49,999 square feet. Some of the more notable stores that were closed in this size range include Mill Stores in Nashua, Off Broadway Shoe in Salem, Staples in North Hampton, Michael’s in Manchester, and Bob’s Discount Furniture in Seabrook.

Regional Submarket Rankings: There has been no change in the top ten largest regional markets: Nashua continues to rank first with 6.2 million square feet of inventory; Manchester follows at 5.4 million square feet; and Salem is a distant third at 3.9 million square feet. Seabrook inched across the 2.0 million square foot threshold this year with the addition of the 145,000 square foot Seabrook Crossing. Among towns with at least 500,000 square feet of retail space, Bedford and Salem remain ranked 1-2 in lowest vacancy rate at 3.7% and 3.9%, respectively.  Amherst is next in line at 4.2%, jumping ahead of Nashua this year. Seabrook had the highest vacancy rate in the region at 16.7%. Somewhat a victim of its own success, the town has suffered the past two years as the former 139,100 square foot Walmart store at Seacoast Shopping Center continues to sit idle following a store relocation to Seabrook Commons. The vacant Shaw’s building at Seacoast Shopping Center also remains unoccupied.  Manchester remains in second place in the ranking at 16.3%. North Hampton is new to the top five this year as a result of several store closings at Lafayette Crossing including Famous Footwear, Staples, and Dress Barn.

Retailer Activity: O’Reilly Auto Parts led the way in incremental space in Southern New Hampshire by way of its acquisition of VIP. This may be somewhat misleading, however, since VIP continues to operate a store-within-a-store at all six O’Reilly locations in the region. Ocean State Job Lot ends the year in second place with new stores in Nashua and Milford. Hobby Lobby follows with a new Seabrook store. In terms of new store count, O’Reilly also ranks on top with six units, followed by Aroma Joe’s coffee shops and Eastern Bank, each with three new locations.

Staples closed its North Hampton store and reduced the size of its Manchester location, resulting in the largest space contraction in the region. O’Neil Cinema sold its operating interest at its Londonderry location to Carmike, placing it in second. Mill Stores and Off Broadway Shoe follow. Radio Shack closed five stores, the most in the region.  The complete report contains much more detailed information on these categories and more, and will be available soon at KeyPointpartners.com.


The 2015 KeyPoint Report for
Eastern Massachusetts/Greater Boston is available now at KeyPointPartners.com - click on Research Reports
Posted by KeyPoint Partners at 7:48 AM