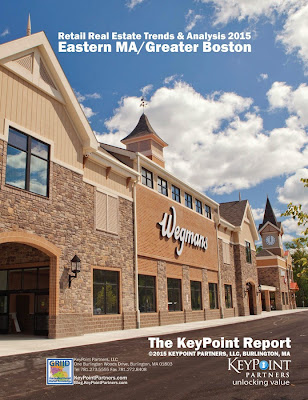 While the 2015 KeyPoint Report for Eastern Massachusetts/Greater Boston, based on our proprietary GRIID™ retail database, is in production, here are some of the highlights that we can share right now!

Vacancy Rate:  We never want to be the bearers of bad news, but somebody has to do it: vacancy in Eastern Massachusetts continues to trend upward. In 2015, the region experienced a rise in the vacancy rate from 8.5% to 8.8%. We continue to see national and regional chains close stores, as we did a year ago when the rate jumped from7.8% to 8.5%. This year major contributors to the higher vacancy rate range from small tenant closings such as Radio Shack and Coldwater Creek to large department stores units including Sears, Kmart, and JCPenney.

Size Classifications: In recent years, a general trend in Eastern Massachusetts was the increase in vacancy rates among smaller stores, which was largely attributable to mom-and-pop stores that could not recover from the Great Recession. This size category also experienced a rise in vacancy rates this year, but this time national chains were a major contributor. Radio Shack in particular impacted these categories - spaces under 2,500 square feet saw an increase from 13.1% to 13.5%, while the 2,500-4,999 square foot categories increased from 10.9% to 11.7%. The electronics chain impacted both. The 10,000-24,999 square foot bracket also experienced a significant vacancy rate increase from 7.3% to 8.0%, resulting mainly from store closings by Staples, Mill Stores, and Work Out World.

Occupancy also slipped in categories under 10,000 square feet. Conversely, however, some larger categories gained. Market Basket openings helped push up the 50,000-99,999 square foot segment, while Target, Wegman’s, and Wal-Mart all had a hand in the occupancy share gain in the category above 100,000 square feet.

Town Rankings: The top 10 town rankings by retail square footage remain intact from a year ago. There was some minor shuffling within the top 10, with Burlington moving up from 7th to 5th by virtue of new development projects, most notably 3rd Ave.

Among communities with at least 500,000 square feet of retail space, Abington remains on top of the rankings for lowest vacancy rate in the region. Two smaller towns added enough new retail space this year to get them into the top 10 for lowest vacancy rate: Westwood, as a result of the University Station opening, and Concord. Lexington, Chelmsford, Mansfield, Braintree, and Acton are also newcomers to this top ten ranking.

Seven of the top ten towns with the highest vacancy rates repeat from last year. Only Hanover, Kingston, and Middleton are new to the list. JCPenney and Sears closings were the cause of the former two towns moving up in the ranking. 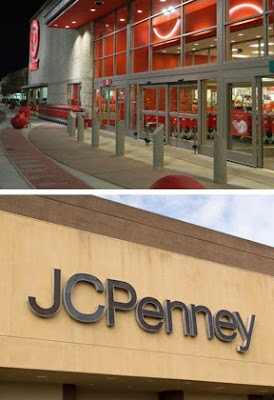 Retailer Activity:  With respect to expansion by square footage, among the top growing retailers in Eastern Massachusetts, Target nosed out Market Basket for the most new space to the region, adding 277,600 square feet with new stores in Wilmington and Westwood. Market Basket would have taken the top spot with four new stores in Littleton, Revere, Attleboro, and Waltham but decided to close one of its two Westford stores (a move that was anticipated), netting the chain 254,400 square feet for the year. Wegmans continued its one-a-year market expansion with a new store in Burlington, placing this retailer in third. Wal-Mart added a small store in Saugus, which ranked it at 4th place. Subway led the way with respect to store count, adding eight locations. Massage Envy, Starbucks, and Dunkin Donuts all tied for second with six new stores apiece.

On the negative side, JCPenney dropped 207,900 square feet by closing its Taunton and Hanover stores, the largest decline in total space in the region. Work Out World and Mill Stores contracted by 155,400 and 140,900 square feet, respectively. The runaway loser for unit reduction was Radio Shack, which closed 37 locations. Staples was a distant second with 10 store closings, followed by Wet Seal with seven closings.

This KeyPoint Report examines changes in supply, vacancy and absorption, retailer activity, and market composition by store size and retail categories from May 2014 to May 2015. The study area includes 189 cities and towns, representing more than 3,500 square miles (44% of Massachusetts’ land area) and approximately 4.96 million people (75.8% of the state population).

According to Retail Metrics, comp store sales for the US retail sector as a whole edged down 0.3%. Among retailers reporting monthly comp-store sales, L Brands was down 1.0%, Gap was down 12.0%, Rite Aid was up 3.0%, and Costco was flat. See our sales report below...Commercial real estate services firm DTZ, backed by private-equity firm TPG, has entered into a deal to acquire Cushman & Wakefield Inc. for $2 billion. The new company will have 43,000 employees, annual revenues of more than $5.5 billion and manage more than 4 billion square feet of real estate globally.  It will operate under the Cushman & Wakefield name. The transaction, which is subject to regulatory approval, is expected to close in the fourth quarter.
Posted by KeyPoint Partners at 7:05 AM No comments:

Bibibop Asian Grill has grown to four locations and plans almost 20 more stores in the next two years...Versa Capital Management has finished its deal to buy Wet Seal. Wet Seal will continue operating 173 stores. The teen retailer filed for Chapter 11 bankruptcy protection in January after it laid off thousands of workers and closed 338 stores, or two-thirds of its locations...Donatos opened one new location this year, with a second in the works, and plan to have more than 200 total units by 2018. Donatos operates 153 restaurants and 15 sports and entertainment venues in 6 states...Tractor Supply Co. plans to open 110 to 115 new stores in 2015. As of March 28, Tractor Supply Co. operated 1,422 stores in 49 states...O’Reilly Automotive plans to build a new distribution center in Texas to help support 205 new stores in 2015. As of March 31, O'Reilly operated 4,433 stores in 43 states...Starbucks plans to open 1,650 net new stores globally during fiscal 2015. This includes 600 new stores in the Americas, half licensed; 200 new stores in Europe/Middle East/Africa, primarily licensed; and 850 new stores in China/Asia-Pacific, primarily licensed...The HoneyBaked Ham Company and Café announced an aggressive franchise expansion program to develop 15 to 20 new locations in the year ahead, awarding additional franchises in target markets across the nation. The brand has more than 400 locations nationwide and 190 franchised locations...The Container Store expects to open 9 new stores and relocate 1 store during fiscal 2015...Smart & Final Stores Inc. plans to open 5 new Smart & Final Extra! Stores in the 2nd quarter, complete 4 conversions of Smart & Final stores to the Extra! format, including 1 store relocation, and relocate 1 Cash & Carry store...Big 5 Sporting Goods Corp. plans to open approximately 10 net new stores in fiscal 2015, including 3 in the second quarter...ZIPS Dry Cleaners has signed a franchise agreement with ZDC Holdings for the development of 104 stores throughout the Mid-Atlantic and Midwest, the largest deal to date for the nearly 20-year-old brand. Headquartered in Greenbelt, MD, ZIPS operates 40 stores in the Mid-Atlantic region...Hibbett Sports opened its 1,000th store. Hibbett Sports Inc. and its subsidiaries now operate 1,000 athletic retail stores in the South, Southwest, Mid-Atlantic and Midwest in strip centers and enclosed malls...Macy's Inc. will open the first four test stores of its new discount Macy's Backstage concept this fall in New York City and the surrounding area, the first off-price business for the Macy's brand. Macy’s is also opening its 14th Bloomingdale's outlet store in Manhattan, the first in an urban location...Sundance Catalog plans to open 2 locations in 2015 in Edina, Minnesota, and Dallas. Up to 5 additional stores are planned for 2016.The company, which opened its first store in 2007, currently operates 3 locations, and plans additional stores across various locations nationwide. Future locations will include malls, shopping centers, and street locations...Walmart opened a 5th Walmart on Campus store, at Virginia Commonwealth University in Richmond...H&M will open its largest store in the world, in Manhattan’s Herald Center, this month. The 63,000 s/f store will be the fast-fashion giant’s 13th location in Manhattan...Loblaw Companies Ltd. is pulling its Joe Fresh line from J.C. Penney stores in the US next year and switching its focus to its stand-alone stores. The company has 6 stand-alone stores including a flagship location in New York's SoHo neighborhood. Joe Fresh expanded its US presence in 2013 after almost 700 J.C. Penney stores began carrying its line...A rumored multibillion-dollar merger between Delhaize Group, the Belgium-based owner of Hannaford and Royal Ahold, the Dutch company that owns Stop & Shop, although unconfirmed as of this writing, caused shares of both companies to rise sharply this week.
Posted by KeyPoint Partners at 7:04 AM No comments:

Frederick's of Hollywood has closed all of its stores and will do business only online. In 2014, Frederick's operated 94 stores and a catalog business, in addition to its website...Simply Fashion and Dots stores nationwide are closing. Simply Fashion  filed for Chapter 11 bankruptcy protection last month. The privately held company runs about 243 stores under the Simply Fashion and Dots names. Liquidators Gordon Brothers Group and Hilco Merchant Resources are managing the closings...Wendy's plans to sell 640 company-owned restaurants in the US and Canada as part of a plan to reduce the number of company-owned locations. The company hopes to sell the restaurants to franchisees. At the end of 2014, Wendy's had a total of 6,515 restaurants worldwide.
Posted by KeyPoint Partners at 7:01 AM No comments:

U.S. retail sales were flat in April as households cut back on purchases of automobiles and other big-ticket items, according to a retail sales report from the Commerce Department indicating the economy was struggling to rebound strongly after barely growing in the first quarter.

Source: U.S. Department of Commerce - commerce.gov
Posted by KeyPoint Partners at 6:58 AM No comments: 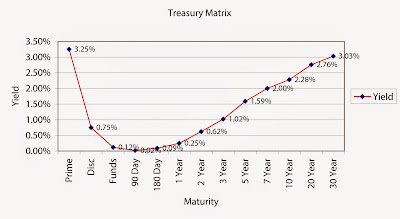 Treasury Yield Sources:  federalreserve.gov; ustreas.gov
Posted by KeyPoint Partners at 6:57 AM No comments:

Source: The Conference Board - www.conference-board.org
Posted by KeyPoint Partners at 6:56 AM No comments:

Source: Institute for Supply Management - Manufacturing Report on Business - www.ism.ws
Posted by KeyPoint Partners at 6:53 AM No comments: