While Sears Holdings Self Destructs, Who Benefits?

Limb by limb, Eddie Lampert continues to tear his company apart. This year, it’s been the spin-off of Lands End, a proposed 200-300 store REIT, and a rights offering of up to 40,000,000 common shares of Sears Canada. It’s getting hard to decipher whether Sears Holdings is in the retail business or the banking business. But even as Mr. Lampert attempts to “save” his company, the bleeding hasn’t let up.

Imagine: when Sears and Kmart merged in 2005, the companies created the third largest retail firm in the country.  At the time, the two retailers operated 3,500 stores. It was the epitome of two bad retail operators creating one bigger bad retail company. Who among us doesn’t remember hearing that announcement and wondering WHY? To prove the point, I compiled historical sales information from the first full merger year forward.

If I can tweak a movie phrase used by Harry Doyle (Bob Uecker) in the movie Major League, it’s easy to see that annual revenue figures have been trending “juuust a bit down.” In 2006, Sears Holdings reported total revenue of $ 53.0 billion - and that figure has been declining every year since. The chart below shows that in 2013, the stripped-down version of the company generated $36.2 billion. 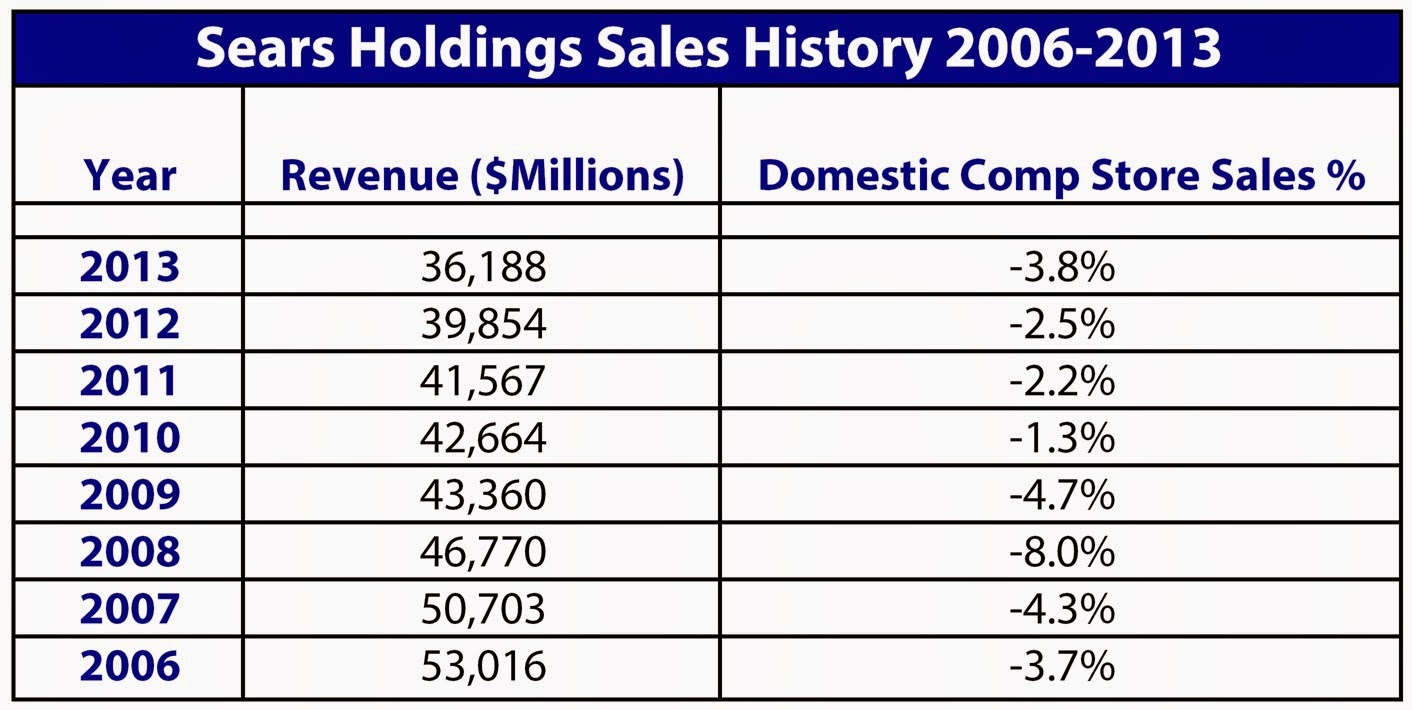 Now, some contrarians might say that the company is generating that revenue with a much smaller store count. Actually, the vast majority of the store reduction came via the Sears Hardware spin-off in 2012, affecting 1,238 units. But does it really matter anyway? The declining comp store sales trend tells the whole story - this chain is dying a slow death. Just take a look at net income from continuing operations during the last three years, which show consecutive losses of $1.4 billion, $930 million, and $3.1 billion.

A number of Sears Holdings competitors can’t have the self-destruction come fast enough. Both hardline and softline retailers have benefitted from the meltdown. For example, Sears still remains America’s top appliance seller (believe it or not) a position it has held for decades. According to a recent Bloomberg article, Sears had 28% of the major appliance market in the U.S. last year. However, that could drop to 10% as stores continue to close and shoppers continue to look elsewhere. Gary Balter, an analyst at Credit Suisse Group AG in New York, recently noted that if Lowe’s picks up just one quarter of the share Sears loses, it would be the top appliance seller by the end of 2016. Home Depot and Best Buy are also benefiting from the shift in shopper loyalty. Softline retailers that have taken market share largely include Kohl’s, Target, and Wal-Mart. All three retailers have faced the same economic turmoil that Sears and Kmart have experienced in recent years, but have found ways to grow earnings despite the road blocks.

In February 2014, in his annual letter to stockholders, Mr. Lampert states: “While our financial results remain challenged, 2013 may have been the year that justifies why so many people across Sears Holdings have been working for several years on our transformation from a traditional, store-based retailer to a membership company that serves its members across an integrated retail platform. Furthermore, if the way the entire American retail industry ended 2013 is any indication, I believe 2014 may well be a year in which Sears Holdings begins to clearly demonstrate the advantages of this transformation.”

Sears Holdings first half results through August 2, 2014 show an operating loss of $889 million, compared to the 26-week loss of $298 million last year. I can only imagine what Mr. Lampert will say in his next letter to shareholders!