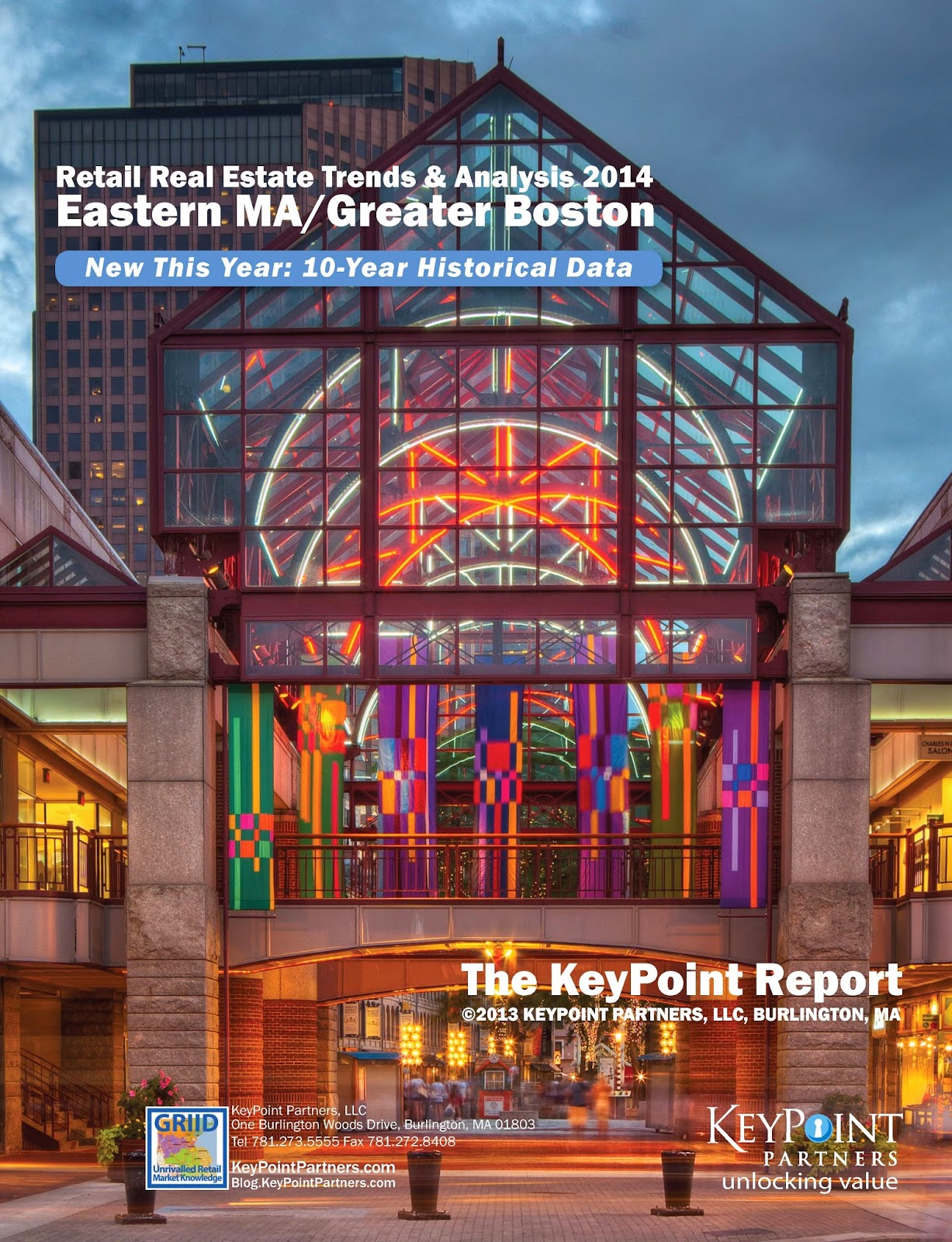 While the 2014 KeyPoint Report for Eastern Massachusetts/Greater Boston, based on our proprietary GRIID™ retail database, is in production, we will again share some of the early results.

Vacancy Rate: What’s that they say…two steps forward, one step back? With respect to vacancy, that’s exactly what happened during the past year. The vacancy rate in Eastern Massachusetts jumped up to 8.5% from 7.8% last year. But the increase in the rate is attributable largely to three retailers: Building 19 and Dot’s liquidated while Shaw’s Supermarkets closed five stores. Although two Building 19 units have reopened as The Rug Dept., the space that remains vacant among these three retail chains represents 62.8% of the incremental vacancy that occurred during the past year.  Without these store closings we would have experienced a slightly more palatable increase in vacancy to approximately 8.0%. The real issue is that, given the uninspiring quality of these particular locations, and the fact that the average store size of the Shaw’s and Building 19 vacancies is more than 50,000 square feet, filling these new vacancies may be challenging.

Size Classifications:  Another trend reversal occurred with respect to vacancy changes by store size. While all but one size classification showed significant improvement in vacancy last year (200,000 square feet and above was fully occupied), the only category showing improvement this year was the 25,000 - 49,999 square foot range, in which the vacancy rate declined from 8.2% to 7.5%. Two of the absorbed vacancies in this size range were in Chelmsford, including Stop & Shop and Marshalls. The site is currently under redevelopment, and will become the 42,113 square foot Chelmsford Town Center. The remaining size classifications remained stable or showed modest increases in vacancy rate -  with the exception of the 50,000-99,999 square foot range. Within this category the vacancy rate jumped from 3.0% to 6.6%, primarily as a result of the closings of Building 19, Shaw’s, and the landmark Hilltop Steak House in Saugus. 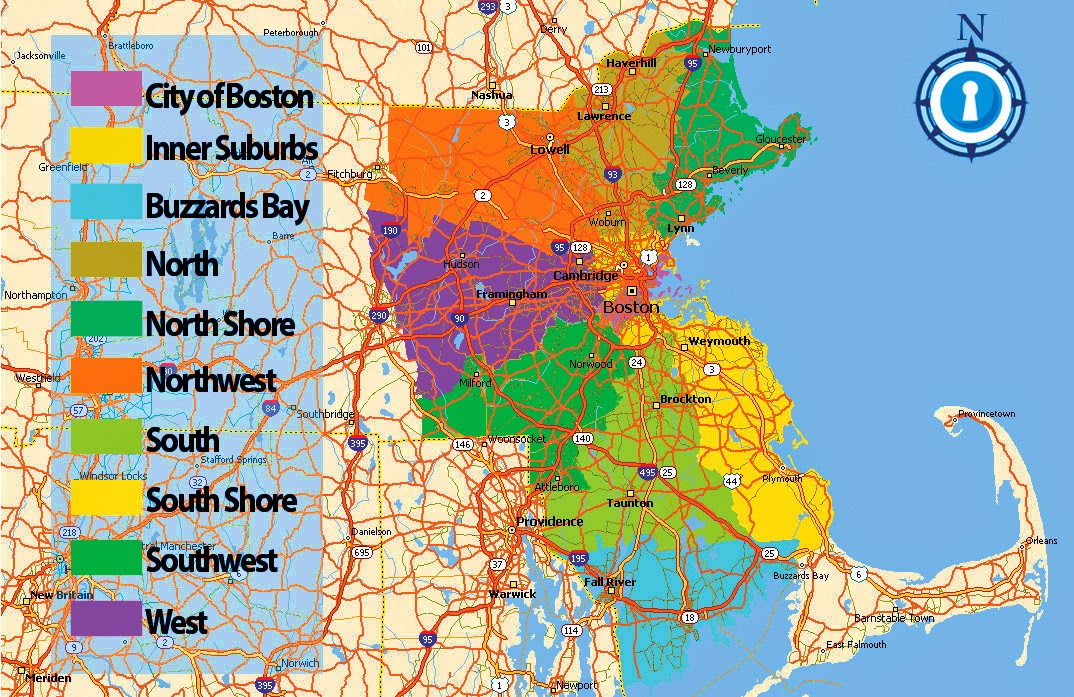 Town Rankings: The top 10 town rankings by retail square footage remain intact from a year ago, with one exception: by virtue of a new Walmart Supercenter, Fall River edged up and knocked Peabody out of the rankings. There was some minor, and not particularly noteworthy, shuffling within the top 10.

Among communities with at least 500,000 square feet of retail space, there were five new towns breaking into the top 10 rankings by lowest vacancy rate. These include Foxboro, Hingham, Hudson, Danvers, and Everett.  Abington remains in the top position with a scant 1.2% vacancy rate; bringing up the rear in 10th place was Everett at 3.7%. Foxborough made the biggest leap into the top 10, coming from 58th place last year. This was largely due to the filling of significant vacancies at Patriot Place, and the opening of an Ocean State Job Lot in a vacancy left behind years ago by Bradlees.  There were only eleven towns that finished the year with less than 4% vacancy, compared to fifteen towns last year.

At the gloomy end of the scale, there are a number of towns that continue to be burdened with excessive vacancy. Six towns remain among the top 10 with the highest vacancy rates from last year, including Malden, which had the highest vacancy rate this year at 22.7%. Newcomers to the list include Haverhill, New Bedford, Shrewsbury, and Fairhaven. Fairhaven, moving from 37th place, was the only town not in the top twenty last year.

Retailer Activity: With respect to expansion by square footage, among the top growing retailers in Eastern Massachusetts, Walmart brought the most new space to the region, adding 344,000 square feet by opening three new Supercenters in Raynham, Swansea and Fall River (the latter two replacing traditional Walmart stores in these communities).  Party City ranked second, a product of its iParty acquisition. Whole Foods ended in third place, primarily through the acquisition of five Foodmaster units and the opening of a new Lynnfield store. Building 19 was the biggest loser by square footage after closing 597,400 square feet of space. As noted, two of the locations, Norwood and Burlington, have reopened as The Rug Dept.

Adding the most new store units this past year was Party City via the iParty acquisition, picking up 24 stores in the region. Subway was next with the addition of 11 units, followed by Orange Leaf and Metro PCS with 9 new stores each. Offsetting the Party City gain, of course, is the loss of 24 iParty stores. The Dot’s liquidation led to the closing of the 16 stores in Eastern Massachusetts, and Building 19 followed with 9 store closings, one of which was an annex to the Burlington main store.

Posted by KeyPoint Partners at 10:02 AM