The Case of the Shrinking Sales Index 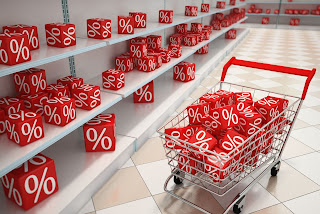 In Will Monthly Sales Reporting Be Missed? on RetailWire.com, March 12, 2013, Tom Ryan notes: “With the new retail calendar year, a slew of retailers - including Target, Macy's, Kohl's and Nordstrom - have joined others in moving to stop reporting monthly sales. Also bowing out of the practice are Stage Stores and Bon-Ton. TJX Cos., the parent of T.J. Maxx and Marshalls, will stop reporting beginning in April. J.C. Penney, Dillard's  and Saks stopped reporting last year. In the 90s, over 100 retailers reported sales on a monthly basis with the number dropping to around 75 by the early part of the last decade. Liquidations and mergers accounted for some of the exits but many of the majors, including Home Depot, Lowe's, Sears, Dollar General, CVS, Best Buy, Toys "R" Us, Starbucks, Barnes & Noble, moved away from the practice. Wal-Mart discontinued reporting monthly sales in May 2009”.

As regular KeyPoints readers are aware, every month for quite some time we have begun the Industry News: National section with an overview of monthly same-store retail sales performance, which we generally introduce with a sentence about the International Council of Shopping Centers monthly index of major retailers. That index, and what it measures, has changed dramatically.

Our issue of March 2006 began with this statement: “February same store sales for the ICSC’s index of 65 major retailers rose 3.2%”. As recently as last year, in the June 2012 issue, we noted: “US chain store comp retail sales for May rose by 3.6% year-over-year as measured by the ICSC's tally of 22 major retail chains”. The current month’s ICSC tally, reflecting sales performance for May 2013,consists of just 13 retailers.

In this publication, we’ve always included a more detailed list of comp-store sales results for retailers in a variety of categories. When I started working on this publication, in 2001, that list took almost two full pages (of the printed version), and consisted of 73 active major retailers, all of whom reported monthly comp-store sales results as a matter of course. At left, you can see copy of the list from January of 2001, reporting sales results for December 2000.

We’ve pared down and modified that list over the years; our
current list (which you can see further down on this page) reports sales for a group of 40 major retailers in key categories which are active in our home region of New England. As of this writing, as you can see from the table, only 5 of those now report monthly. The others report quarterly, and are on varying fiscal reporting schedules. Because of this sizeable shift, a monthly retail comp-store sales index can no longer be considered a reliable indicator of the retail industry, and this is reflected in a variety of indexes and lists throughout the industry.

Posted by KeyPoint Partners at 10:48 AM No comments: 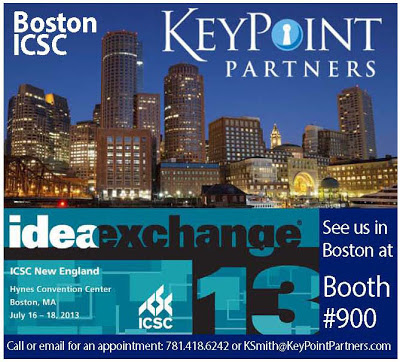 Posted by KeyPoint Partners at 10:28 AM No comments:

According to the International Council of Shopping Centers Chain Store Sales Trends: “May’s final year-over-year comparable store sales pace was up 3.4% compared with 3.0% in April, and the strongest monthly gain since January’s 4.5%. The May tally was based on 13 retailers. The small sample of monthly reporting firms suggests caution on implications for the broader industry.”  For much more about this issue, read this month's Commentary above.
Posted by KeyPoint Partners at 10:26 AM No comments:

Bloomingdale’s will open a 167,000 s/f, 3-level store in Honolulu in fall 2015, the retailer’s first Hawaii location. In addition to its 36 current stores, Bloomingdale’s will open 2 stores in Fall 2013 in CA...The Pizza Studio will open several new locations in the Los Angeles area in Summer 2013 and has over 37 stores in development for national expansion...Starbucks opened 10 Seattle’s Best Coffee stores in the Dallas-Fort Worth area in one day last month, the largest number of openings in a single market on a single day in Starbucks’  history...Smashburger plans to more than double its nationwide store count to about 500 in the next few years. The chain currently runs about 200 US locations...Chester's International LLC opened 9 new locations in partnership with retailers in Indiana, Kansas, Michigan, Mississippi, Nevada, New York, Texas and Virginia. Chester's has more than 2,000 Chester Fried licensed and Chester's franchised locations...Rue21 shareholder Apax Partners will acquire the teen apparel retailer in a deal valued at about $1.1 billion. The private equity firm, which has a 30% stake in Rue21, also owns Cole Haan and Takko Fashion...Marco's Pizza plans to open its 500th store by 2014. The chain currently has more than 350 stores, with more than 200 in development...Noodles & Company filed for an initial public offering. The fast-casual chain is seeking to raise up to $75 million with the goal of repaying debt and growing nationally. With 339 restaurants in 25 states, Noodles & Company is owned by private-equity firm Catterton Partners, along with Argentia Private Investments. The 339-unit chain includes 288 company and 51 franchised locations. Noodles & Company hope to reach 2,500 US units in 15 to 20 years...Bi-Lo Holdings LLC, parent company of Bi-Lo and Winn-Dixie grocery stores, will buy an additional 165 stores. Bi-Lo is paying $265 million in cash to purchase all the Sweetbay, Harveys and Reid’s stores in the Southeastern US from the Delhaize Group. After the company bought out Winn-Dixie over a year ago, it had 686 stores...Bridgestone America expects to open 45 tire and automotive service centers this year in 16 states, pushing the firm's network to more than 2,250 locations nationwide. Bridgestone operates company-owned retail stores in 48 states...Chipotle has been testing a new Asian fast-casual concept called ShopHouse at a single location in Washington. Now it’s poised to grow, with three new ShopHouse leases signed in the past month in Maryland, DC, and LA...Joe’s Jeans Inc. will open 70 new full-price boutique stores. Joe’s Jeans currently runs 12 full-price boutiques and 19 outlet shops. By the time the rollout is finished in 2017, Joe’s will run a fleet of 100 US stores...7-Eleven parent Seven & I Holdings Co. is planning more acquisitions and may more than double the number of c-store stores it operates in North America, increasing its store number to 20,000 or even 30,000. 7-Eleven currently has more than 8,000 convenience stores in North America. No time-frame for the planned expansion has been defined. Seven & I has been acquiring smaller US c-store chains, adding more than 650 units in the last fiscal year...Whole Foods has opened a new store in Detroit this month as part of its repositioning to shoppers on a budget. The chain will launch pilot stores in Detroit, New Orleans and Chicago in 2013 and 2014 which feature fewer staffers, lower prices, and more frozen and pre-wrapped food...By the end of July, Samsung hopes to have Experience Shops, kiosks in high-traffic areas staffed by Samsung reps to demo products and answer questions, in 1,400 Best Buy stores. Best Buy also announced another new in-store concept, The Windows Store, which will sell Windows-based PCs, tablets and accessories and offer support from Microsoft-trained staff. The format will open in 500 US Best Buy locations later this month through September....Macerich Co. has sold the 800,000 s/f Green Tree Mall in Clarksville, IN for an undisclosed price, as part of a five-property portfolio sale that will generate about $470 million....Forest City Enterprises Inc. has formed a venture with Australia-based QIC to recapitalize and invest in a portfolio of 8 US malls in NV, CA, VA, and PA...Somerset Tire Service Inc. is running grand openings for the next 8 weeks to mark the addition of 25 locations. The new stores,15 in New Jersey and 5 each in New York and Pennsylvania, expand STS's network to 150 stores...Golfsmith International will open a two-story, 15,000 s/f store on Fifth Avenue, near 38th Street, in Manhattan...Five Below added 52 stores last year, to bring its total to 244, and plans to open 60 more this year...Dunkin’ Donuts has been rolling out a “café-style” store redesign that includes a new, earth-toned palette, and adds features such as more comfortable seating and music. Dunkin’ Donuts has opened 90 remodeled stores to date, and plans to open about 600 by the end of this year. Dunkin’ plans to double its current store total to 15,000...McAlister's Deli has signed agreements with four franchise groups to develop 21 new restaurants in 7 states. The 21 new restaurants will be developed by three new franchise groups and a current McAlister's franchisee. McAlister's currently has more than 315 restaurants in 23 states. McAlister's Deli has signed agreements with four franchise groups to develop 21 new restaurants in 7 states. The 21 new restaurants will be developed by three new franchise groups and a current McAlister's franchisee. McAlister's currently has more than 315 restaurants in 23 states.
Posted by KeyPoint Partners at 9:58 AM No comments:

Macy’s will close its store at the Railway Exchange Building in downtown St. Louis. Macy’s will continue operating its other 8 stores in the Greater St. Louis area...Staples will be more aggressive than originally planned in its effort to trim stores it has in North America this year. The company is on target for a net reduction of 40 stores in 2013, compared with the earlier projection of 30 stores announced last fall. The company is sticking with its estimate of 45 store relocations and downsizings this year.
Posted by KeyPoint Partners at 9:54 AM No comments:

Dramshop Hospitality has opened the 2,400 s/f Union Fish Seafood & Raw Bar at the Launch at Hingham Shipyard. The Boston-based restaurant management group operates the Union Fish in Plymouth, the Regal Beagle in Brookline and Church Restaurant & Nightclub in Boston’s Fenway...Staples will open a 17,500 s/f flagship store this fall at One Washington Mall in the former Newbury Comics space, as well as a portion of the second floor, to create a superstore similar to the one it operates in Manhattan. The space had been vacant for nearly four years. Staples plans to close its store on nearby Court Street...Cabela’s will open an 88,000 s/f store in Berlin, MA in the spring of 2015, the chain’s first MA location, in the Highland Commons Shopping Center...Plans for a 400,000 s/f shopping area and “lifestyle center” called Sharon Commons in Sharon, MA, first proposed in 2007, are inching closer to viability. Target and BJs have signed leases and would like to open in the fall of 2014...Boston real estate concern Bollard Group is reportedly marketing a $300 million portfolio of 24 retail properties, nearly all of which are based in MA. The portfolio’s non-MA assets include 3 sites in NJ and CT...Henry Bear’s Park, a chain of three toy stores, is for sale. The store was founded by Sally Lesser 37 years ago, and she plans to retire. Lesser has stores in Cambridge, Arlington and Brookline, MA...Legal Sea Foods will open a 5,600 s/f restaurant at the Millennium Place condominium tower nearing completion at the edge of Boston’s Chinatown, expected to open this fall...Barry’s Bootcamp will open its first New England franchise in Boston’s Downtown Crossing, a 5,100 s/f exercise studio at 30 Chauncy St.
Posted by KeyPoint Partners at 9:53 AM No comments: 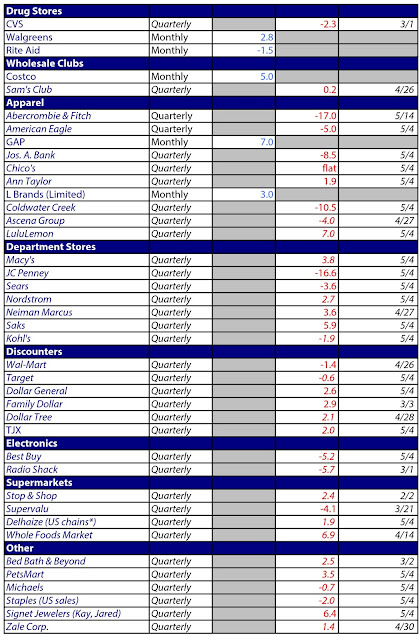 Notes: figures gathered from individual company websites, press releases, and Federal filings.  Not all companies report all figures; results not reported will be marked “n/r”. Quarterly results will be updated when available; quarterly figures are shown in italics. Figures from companies not calculated to one decimal point automatically received an ending digit of 0.

Posted by KeyPoint Partners at 9:51 AM No comments:

Source: U.S. Department of Commerce - commerce.gov
Posted by KeyPoint Partners at 9:48 AM No comments: 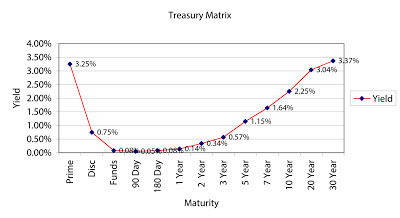 Treasury Yield Sources:  federalreserve.gov; ustreas.gov
Posted by KeyPoint Partners at 9:47 AM No comments:

Source: The Conference Board - www.conference-board.org
Posted by KeyPoint Partners at 9:46 AM No comments:

Source: Institute for Supply Management - Manufacturing Report on Business - www.ism.ws
Posted by KeyPoint Partners at 9:45 AM No comments: