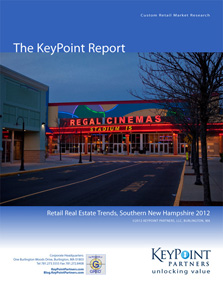 The KeyPoint Report on retail real estate in Southern New Hampshire will be available soon at KeyPointPartners.com. Below are highlights from the findings in this year’s report:


Total retail supply in Southern New Hampshire showed a modest gain to 28.9 million square feet, increasing by 77,000 square feet, or 0.3%, from last year. After reporting a rebound in the vacancy trend last year, when the amount of unoccupied space was reduced by a significant 15% and the vacancy rate decreased from 11.4% to 9.5%, the region reverted to the ways of the recent past, with the vacancy rate increasing to 10.6%.

The larger size ranges were affected by the big box closings noted earlier, i.e. Lowes, Sears Essentials, and Building 19. In the 5,000-9,999 square foot category, the liquidation of Daddy’s Junky Music had the largest impact, closing two locations in this segment and three overall in the region. Independent mom and pops continue to be primarily responsible for much of the new vacancy in the under 5,000 square foot categories.

With respect to total retail supply, the top ten cities and towns remain the same as last year's results The "Big Three" within our regional coverage include Nashua, Manchester, and Salem, in that order, which contain 54% of the region’s retail space. 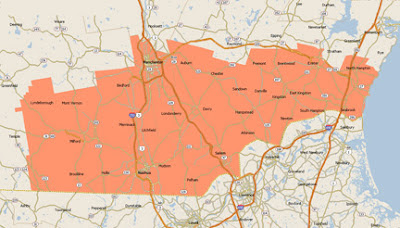 Among towns with at least 500,000 square feet of retail space in Southern New Hampshire, Bedford was the only town with a vacancy rate below 5%, coming in at 4.5%. Amherst and Salem followed at 5.5% and 5.6%, respectively. Manchester and Merrimack tied for the highest vacancy rate at 16.7%, followed by Plaistow at 16.3%. Only five towns had vacancy above 10%, although there were 19 towns above that level when smaller retail communities are included.

The full report contains much more detailed information on these categories and more. Stay tuned!

The KeyPoint Report examining the retail real estate marketplace for Southern New Hampshire focuses on the 11-month period beginning June 1, 2011 and ending April 30, 2012. The report examines supply, vacancy and absorption, retailer activity, and market composition by store size and retail categories. The studied market includes 39 cities and towns representing more than 835 square miles and approximately 540,500 permanent residents (41.0% of the state population). The KeyPoint Report for Eastern Massachusetts/Greater Boston will be released this month. The KeyPoint Report for Greater Hartford, Connecticut will follow soon.

In today's retail real estate community, unlocking value means providing the best possible information. Detailed, reliable market information is the essence of shopping center success and retail store profitability. KeyPoint Partners provides customized research consulting services ranging from preliminary desktop assessments to comprehensive evaluations which integrate field investigation and quantitative analysis for a variety of retail location and store types. The heart of our research superiority is GRIID™, which tracks all retail activity including supply, vacancy and occupancy, population shifts, demographics, and marketplace trends for close to 260 million square feet of retail properties and nearly 60,000 retailers and tenants in key markets in our territory. We use this information in mapping and comparative analysis applications.
Posted by KeyPoint Partners at 12:54 PM No comments:

Supervalu Inc. operator of the Albertsons, Save-A-Lot and Jewel-Osco banners plans to complete 100 store remodels and increase Save-A-Lot’s store count by 50 by year’s end…Burlington Coat Factory will open a 92,000 s/f flagship in Manhattan this fall, the retailer’s sixth NYC location. The flagship is part of a broader plan to open more than 20 new stores in 2012…Starbucks has announced a partnership to open a store inside each of the 6 Disney properties in California and Florida. The first will open this summer at Disneyland California Adventure in Anaheim, CA. Starbucks will accelerate new store growth this year to about 1,000 net new stores around the world. The total includes approximately 500 net new stores in the Americas. Starbucks has more than 17,000 stores globally.…Gymboree Corp. will open 105 new stores in fiscal 2012, including 80 Crazy 8 stores…Sears Holdings has expanded its in-store professional apparel Scrubology shops to 91 Sears and Kmart stores nationwide. The concept is already open in 39 stores and offers work apparel and uniforms…Fresh food selections will be expanded at 90 US Target stores, to be completed in late June. Nearly 1,000 Target stores currently offer an expanded food layout, about 10,000 s/ f dedicated to fresh produce, fresh packaged meat and pre-packaged baked goods...Whole Foods has signed 33 new leases in the past year and is on track to open 24 to 27 new stores in fiscal 2012, and 28 to 32 new stores in fiscal 2013…P.F. Chang’s China Bistro agreed to be taken private by Centerbridge Partners LP in a $1.1 billion deal.  The takeover would give Centerbridge almost 400 restaurants under the P.F. Chang’s China Bistro and Pei Wei brands…The Ascena Retail Group will acquire Lane Bryant parent Charming Shoppes Inc. for about $890 million. The move gives Ascena, which owns Dressbarn, Maurices and Justice, entry to the plus-size women's clothing market...Westfield Group, the world’s biggest shopping center operator by assets, will sell 8 US  malls for $1.15 billion. The company will sell 7 of the properties to Starwood Capital Group LLC for $1 billion, and another property to an undisclosed buyer for $147 million...Bed Bath & Beyond has reached an agreement to acquire Cost Plus in a deal is valued at $495 million. Cost Plus currently operates 259 stores under the names World Market, Cost Plus World Market, Cost Plus Imports, and World Market Stores in 30 states…Online retailer Piperlime, a division of Gap Inc., will open its first retail store this fall, in the SoHo neighborhood of NYC. The 4,000 s/f store will offer a similar assortment as online, and be styled as a boutique…Kohl’s is on track to open 10 more stores this fall, as well as remodel another 50 in 2012...Golf Town will acquire Golfsmith International Holdings Inc. for approximately $97.2 million. Golf Town operates 54 stores across Canada and 7 stores in the greater Boston area. Golfsmith operates 85 US stores...Dick’s Sporting Goods will open 4 stores in the current quarter, and 40 namesake stores in 2012. 5 Dick’s stores will be relocated and 2 Golf Galaxy stores will be repositioned in 2012…Hurricane Grill & Wings announced 5 development agreements, adding 28 locations and continuing its national expansion. Currently, the restaurant has 46 locations in 6 states.
Posted by KeyPoint Partners at 12:26 PM No comments:

Cumberland Farms will sell 18 convenience stores and two retail development sites. The properties are located in a mix of urban and suburban markets in Massachusetts, New York, Rhode Island, Maine, Connecticut, New Hampshire, Pennsylvania, and Vermont...Wolverine Worldwide Inc. has partnered with equity firms Blum Capital Partners and Golden Gate Capital to acquire Payless ShoeSource parent Collective Brands Inc. for $1.3 billion. Wolverine, parent of Merrell and Hush Puppies, will buy Collective's unit that owns Keds, Saucony and Stride Rite...OfficeMax Inc. plans to close as many as 35 US stores this year, and open one or two others.
Posted by KeyPoint Partners at 12:23 PM No comments:

Corner Bakery Café will open 22 new locations in Rhode Island and Connecticut in the next 8 years. Corner Bakery Cafe restaurants are owned and operated by CBC Restaurant Corp. with more than 130 US company-owned and franchised locations…Davio’s Northern Italian Steakhouse and Yard House restaurant will be tenants of MarketStreet Lynnfield, a 680,000 s/f mixed-use project under development north of Boston. Whole Foods, the Legal C Bar restaurant and Kings are the only other announced MarketStreet tenants…Boston’s first Pret a Manger cafe, an Athleta shop run by Gap Inc., and an expanded H&M store will fill the former Borders space at the Newbry building on Boylston Street. Borders abandoned the site last year after the bookseller liquidated…Jo-Ann Fabric and Crafts recently opened at Belknap (NH) Mall, and will open in late spring at Rochester Crossing in the Seacoast Region…The Palm restaurant is opening in a new location in an 8,300 s/f restaurant in the lobby of One International Place…One World Cuisine, the Cambridge-based restaurant company, has shuttered Café of India, a landmark in Harvard Square, and is planning to close Mantra in Boston’s Downtown Crossing…The owner of the Lucky 7 casino-style arcade in Gloucester plans to open a second location inside the Liberty Tree Mall on Independence Way…National Grid has installed 11 of its 30 new electric vehicle charging stations at select Ninety Nine Restaurants locations in MA…TD Bank, which has been aggressively expanding in the Northeast, wants to add 50 to 60 more MA branches, including 10 more sites in Boston. The company has 160 MA branches already, making it the Bay State’s fourth-largest bank…The Glynn Hospitality Group will open a new restaurant, the Grain Exchange, in a 200-year-old building on the Rose Kennedy Greenway in June. The Glynn Hospitality Group also operates The Black Rose, The Purple Shamrock, Dillons and Clerys…The parent of Rockland Trust Co. has agreed to buy Central Bank in $54.8 million deal. Rockland Trust, whose corporate parent is Independent Bank Corp. of Hanover, has 67 retail branches, 10 commercial lending centers, and 4 mortgage banking centers located throughout MA. Somerville-based Central Bancorp Inc. is the holding company for Central Bank, which has 9 metro-Boston branches...Microsoft will open a superstore this summer at the Shops at Prudential Center, across Boylston St. from the Apple Store, in the 7,000 s/f space that once housed Ann Taylor…Market Basket held a grand opening this month for its downtown Manchester, NH location. It is Market Baskets's 65th store overall and 28th in NH. A Market Basket in Bedford is under construction...Tenants announced for Cornerstone Square, the 238,000 s/f office-and-retail development under construction at the intersection of Route 110 and Boston Road in Westford, MA, include: Market Basket, National Pet Care and Supplies, Family Eye Care, Dalla Nails, Great Clips, Westford Florist, Ladybird Lingerie, Elements Massage,Premiere Cleaners. Panera Bread, Five Guys Burgers and Fries, and Tutti Frutti…City Sports opened its 21st store, in Burlington, VT on May 6...Shake Shack will open its first MA store next year at the Chestnut Hill Shopping Center in a 3,000 s/f space formerly occupied by the Rugged Bear, and will offer take-out and restaurant seating at the location. Shake Shack has more than a dozen restaurants…Marimekko, the Finnish textile and clothing design company, will open its third US store and first Boston store in July, a 3,200 s/f store at 140 Newbury St...Designer footwear boutique Stuart Weitzman and women’s apparel shop Soft Surroundings will open at the Chestnut Hill (MA) Mall...The Merrimack, NH Planning Board approved a plan for 3 restaurants and a bank at the Merrimack Premium Outlets. The Outlets, which has been in the works since 2004, will feature more than 100 stores.
Posted by KeyPoint Partners at 12:22 PM No comments: 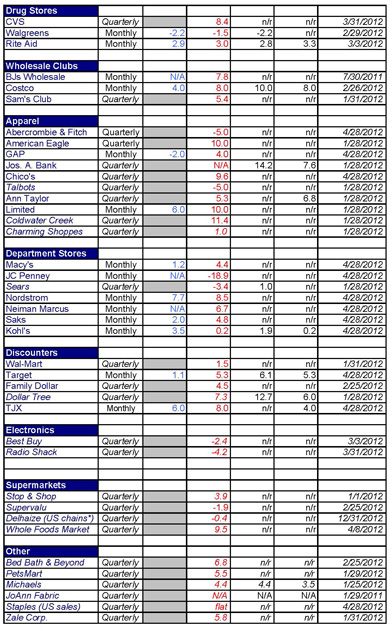 Notes: figures gathered from individual company websites, press releases, and Federal filings.  Not all companies report all figures; results not reported will be marked “n/r”. Quarterly results will be updated when available; quarterly figures are shown in italics. Figures from companies not calculated to one decimal point automatically received an ending digit of 0. *Includes Hannaford Bros., Food Lion, Bloom, Bottom Dollar, Harveys, Kash n' Karry and Sweetbay
Posted by KeyPoint Partners at 12:19 PM No comments: 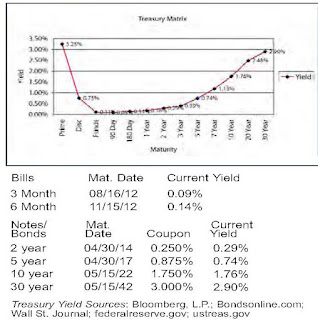 The Conference Board Consumer Confidence Index®, which had declined slightly in March, was virtually unchanged in April. The Index now stands at 69.2 (1985=100), down slightly from 69.5 in March.
Source: The Conference Board - www.conference-board.org
Posted by KeyPoint Partners at 12:12 PM No comments:

Manufacturing continued its growth in April as the PMI registered 54.8 percent, an increase of 1.4 percentage points when compared to March's reading of 53.4 percent. A reading above 50 percent indicates that the manufacturing economy is generally expanding; below 50 percent indicates that it is generally contracting.
Source: Institute for Supply Management - Manufacturing Report on Business - www.ism.ws
Posted by KeyPoint Partners at 12:11 PM No comments: