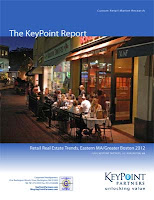 The KeyPoint Report on retail real estate in Eastern Massachusetts/Greater Boston will be available soon at KeyPointPartners.com. Below are highlights from the findings in this year’s report:


Market Overview & Vacancy:
With new retail construction limited, total inventory in Eastern Massachusetts stands at 189.4 million s/f, a modest increase of 0.1% from the prior study period. At the same time, the vacancy rate in the region showed a modest net decline from 9.0% to 8.9%, equating to a reduction in unoccupied space of only 200,000 s/f. It would have been a much better year for net absorption had it not been for the demise of Borders and Syms/Filene’s Basement, which helped to bump up the vacancy rate from a low of 8.7% earlier in the year.

Absorption:
As a result of limited retail development in Eastern Massachusetts and only a nominal reduction in vacant space, net positive absorption in the region was held to a mere 270,600 s/f.

Submarkets:
Among the 10 submarkets in Eastern MA, Buzzard’s Bay carries over from last year with the highest vacancy rate at 11.1%, unchanged from a year ago. As they did last year, high vacancy rates in New Bedford and Fall River negatively skew the submarket. Unoccupied space in these two cities represents one-half of the all the retail vacancy in Buzzard’s Bay. Although the City of Boston vacancy rate of 9.0% in slightly above the region average, this submarket showed the largest decline from last year, falling from 10.5% and shedding approximately 259,000 s/f of empty space. Another submarket showing improvement is the Inner Suburbs, declining from 8.8% to 7.4%. Part of this decline occurred through “addition by subtraction” in the form of building demolition, most notably the vacant 117,100 s/f National Wholesale Liquidator store, which was razed as part of the Northgate Shopping Center redevelopment in Revere. The lowest vacancy rate in the region again occurred in the North Shore where the vacancy rate remained 7.3%. 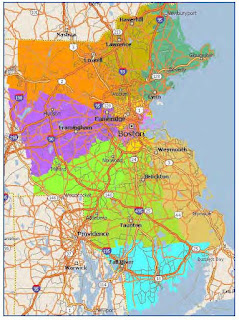 Cities & Towns:
City and town rankings, with respect to total retail square footage, remain the same for the third consecutive year. Boston, Cambridge, and Brockton again hold the top three spots, followed by areas with a regional retail focus such as Natick, Burlington, Peabody, and Saugus. With respect to vacancy, Westborough jumped into the top spot this year with a 21.8% vacancy rate, dramatically higher than the year-ago figure of 13.9%. Much of the vacancy increase resulted from the opening of Northborough Crossing, which includes a number of relocated tenants from the abutting town of Westborough, including BJ’s, TJMaxx, Dress Barn, and likely resulted in other retailers closing, unable to withstand the competitive impact.The lowest vacancy rate in the region was recorded by Abington at 1.8%, holding the number one position for three consecutive years.

Expansion/Contraction by Store Size:
Small tenant vacancy remains troublesome in 2012. The vacancy rate in tenant categories 0-2,499 s/f and 2,500-4,999 square feet inched up this year to 13.9% and 12.0%, respectively. These are the two highest rates among the eight size ranges. Failure of mom and pops is largely contributable. Vacancy among tenants between 5,000 and 9,999 s/f is 11.5%, also well above the region average but at least on a downward trend from the 12.4% level reported last year. The remaining categories above 10,000 s/f are in relatively good shape with all significantly below the region average, with the exception of the 25,000-49,999 square foot range, which stands at 9.1%. However, this segment of retail space has trended down considerably from the levels of 10.4% in 2010 and 9.8% in 2011 as vacancies left behind by defunct retailers such as Circuit City, Linens ‘n Things, Borders, Filene’s Basement and AJ Wright are absorbed.

Development:
It was another quiet year for developers, with only one major development coming online. The September 2011 opening of Northborough Crossing, the 650,000 s/f (retail) mixed-use project in Northborough, marked the entry of Wegmans Food Market into Eastern Massachusetts. Other big box players located there include BJ’s, Kohl’s, Toys R Us, TJ Maxx, Golf Town, Michael’s, and PetSmart. The only other center to open with more than 100,000 s/f was the 201,100 s/f RK Swansea Place anchored by Target and a relocated Marshalls. A small outparcel strip at Swansea Place opened in 2009.

The full report contains much more detailed information on these categories and more, as well as additional data new to this year’s report. Stay tuned!