Sears: The Beginning of the End? 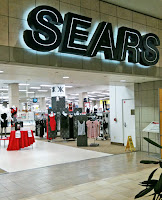 Possibly - but predicting “the end” for Sears Holdings may still be a bit premature, even though we’ve been harping on Sears as a bumbling, stumbling retailer for a number of years now. During the past three decades or so, between futile efforts to create new store concepts (remember “the Softer Side”?) and the inexplicable hiring of a new CEO without one iota of retail experience, Sears has somehow managed to weather the storm. But it appears the “too big to fail” persona that Sears evokes may be facing some resistance at the moment.

The recent announcement of the closings of 100 to 120 Sears Holdings stores only adds to the lowlights of the ever-turbulent Eddie Lampert era. As I write this, a nice rebound of nearly 8% in Sears Holdings stock price was spoiled by the announcement that CIT Group is halting Sears loans to vendors. To add to the pain, Sears announced that its Executive VP of Apparel and Home had left the company after only a two-year stint. There’s no question that Sears continues down the wrong merchandising path, a fact which is reflected unquestionably in its stock value, which has plummeted 82% in the past five years, and nearly 60% in just the past 12 months.

Eddie Lampert brought in Lou D'Ambrosio early last year as Sears’ new CEO. At the time D'Ambrosio was fresh off a six-month stint as a consultant to the Sears Holdings Board of Directors on strategic and operational initiatives. Since his arrival, a number a changes and announcements have occurred:

• The introduction of two new clothing lines, the Kardashian Collection and the Sofia Vergara line
• A power play based on threatening to move its headquarters out-of-state in order to obtain tax concessions from the State of Illinois
• The layoffs of about 700 appliance reps at Kmart stores
• A spin-off of Orchard Supply, a specialty store division of 87 units, into its own independent company
• The distribution of its Craftsman and DieHard brands to Costco
• Marketing space in existing stores to other retailers
• Distributing 5,000 iPads and 1,100 iPod Touches to salespersons in an effort to better control inventory and track customer orders
• The announced closing of up to 120 stores

Time will tell if any of these initiatives translate to the bottom line, but so far the bleeding continues, with a Q3 loss of $421 million compared to only $218 million for the same period in 2010.

It’s evident that Lampert and D’Ambrosio are thinking small these days - as in smaller stores. Total store count for the company has actually increased since FY 2005, with the addition of 195 units through the end of FY 2010. However, the only segment of the company to add stores was the Specialty Store component, both in the US and Canada, which gained 335 units during that time frame. Large format stores, including both Kmart and Sears, declined by 140 units. The partial list of store closings announced last month were entirely large format stores. An annual scorecard of store counts is shown below:

Could it be that Sears Holdings’ end goal is to focus on its Craftsman, Kenmore, and Diehard brands, ultimately phasing out large-format stores in lieu of a small store strategy to promote these core brands? It is certainly plausible. At the same time, about two weeks ago Sears set us up for another disappointing quarter - the all-important Q4. Through December 27th, Kmart comp store sales were down 4.4% quarter-to-date and Sears Domestic sales were down 6.0%. That performance, coupled with continued margin pressure, is expected to produce EBITA less than half of last year’s amount.

With total sales last year of more than $35 billion, a store count above 4,000 units, and an employment base of more than 300,000 workers, it is unreasonable to think that Sears Holdings will follow the path of Circuit City, Borders, and Linens ‘n Things (among many others) by liquidating anytime soon. Sears Holdings remains a top 10 retailer and is surpassed only by Walmart among department store firms. We don’t recall such a top ten retailer ever going out of business. Yet we also believe that the latest wave of store closings, a mere 2% or so of its store count, is far from the last; if the slight bleeding turns into major hemorrhaging, who knows what might happen next?