Using a favorite Yogi-ism, it seems that the retail industry is confronted with “déjà vu all over again.”

Most of us would agree that the worst of the retail cycle is behind us. But as we tread wearily through a very sluggish recovery, we are seeing a number of prominent (and some not so prominent) retailers announcing substantial store closings and even liquidations (some of which are reported in this month’s Industry News, and on our Retail RoundUp).

Based on International Council of Shopping Centers data, store closings showed an increase in Q3 this year of 75.9% versus Q3 last year, a clear indication that things aren’t over yet. Of course, Borders was the biggest news, announcing that it was closing its remaining 355 namesake stores as well as 44 Waldenbooks stores, equating to approximately 60% of all square footage that was closed during the quarter. But bookstore closings are only one page of the story. 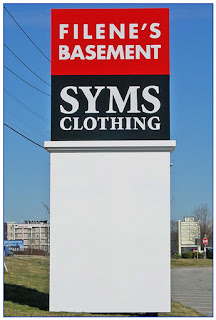 We’ve observed a number of additional store closing announcements of late, especially in our geographic territory, including the Syms/Filene’s Basement shutdown of 46 store locations. Daddy’s Junky Music, a 39-year old, New England-based chain of 12 units, is another permanent casualty, and so is Priscilla of Boston, the 19-unit, high-end bridal boutique, which operated a store on Newbury Street since 1945. Gap also announced a substantial store reduction of 189 namesake stores, or 21% of its U.S. total, by the end of 2013. This move coincides with a previously announced plan to reduce overall company square footage by 10% between 2007 and 2013. Furthermore, these store closings will result in a 34% decline in the number of the Gap division units during this four-year stretch, going from 1,056 to 700 brick-and-mortar locations.

Speaking of bricks and mortar (and other building supplies), Lowe’s Home Improvement made a rare announcement recently, stating that it will close 20 underperforming home improvement stores, not surprising given the sales slump in the home improvement category since the housing bubble burst back in late 2006. Additionally, Lowe’s said that it will reduce future store growth to 10 to 15 stores annually, down from its previous target of 30 stores per year. Evidence of the pullback is the fact that Lowe’s recently announced it was aborting development plans in Salem and Auburn, Massachusetts.

And say farewell to the Fribble: another effort to shed underperforming stores occurred last month when Friendly’s Ice Cream filed for bankruptcy and abruptly closed 63 stores, more than 10% of the chain’s nearly 500 units. Nearly one-half of the store closings were located in Massachusetts. Also in October, after closing seven stores during the past two years, Saks Fifth Avenue CEO Steve Sadove announced that the company would shutter several more units citing, “I don’t think the U.S. needs more stores.”

The other shoe is dropping in the footwear segment, with recent announcements by Payless ShoeSource and Stride Rite that they are closing 275 and 75 stores respectively. In the apparel category, Christopher & Banks just reported that it will close 100 underperforming stores over the next three months, about 13% of the chain, as part of a restructuring plan which also includes format consolidations.

While none of this is good news, retailers are not generally running away from store expansion, although much of the CAPEX will go to the outlet store sector. Gap is opening 75 new stores this year, mostly in its outlet arm but also in its new Athleta division. Saks is adding five Off Fifth locations and Macy’s announced that it will open three new full-line stores, in addition to the two new Bloomingdale’s outlet stores recently opened, including a store at Wrentham (MA) Village Premium Outlets, and a third Bloomie’s outlet on the way. Ann Taylor is not just changing its name (now Ann Inc.), it’s changing its store format, rolling out 40 new concept stores and conversions in 2011, as well as 14 new LOFT stores and 40 outlet stores.

As one might expect from the current economy, value retailers are virtually all performing well, and most are in a growth mode. Family Dollar, Big Lots, Ocean State Job Lot, and Dollar Tree are all adding stores – and the list goes on.

However, here’s an interesting fact: through Q3 2011, store closings are down 34.6% compared to year-ago levels. The favorable comparison in 2011 results from a difficult front half in 2010 when 79% of the 5,572 store closings for the entire year occurred and when Eastern Massachusetts vacancy happened to peak at 9.7% (see our latest KeyPoint Report for Eastern Massachusetts/Greater Boston).

Nevertheless, the acceleration in store closings during Q3 this year does not bode well for 2012. A number of weak retailers are holding their collective breaths for holiday season sales results, because a poor performance at the end of this difficult year could lead to substantial closings after the New Year. Stay tuned for our January issue!


Bob Sheehan, Vice President of Research
BSheehan@KeyPointPartners.com
Posted by KeyPoint Partners at 7:13 AM