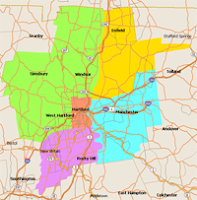 The KeyPoint Report on retail real estate in Greater Hartford, Connecticut will be available soon at KeyPointPartners.com. This is our third report of 2011, and follows our Reports on Eastern Massachusetts/Greater Boston and Southern New Hampshire, both of which are available at KeyPointPartners.com. The 2011 Greater Hartford report will be released shortly. Here are just a few highlights from this year’s report:
Overview
Total retail space in the Greater Hartford region included 37.5 million square feet at the end of the 2011 study period, a modest increase from the 37.3 million square feet reported last year. The most significant new development in the region was the construction of the Stop & Shop-anchored Elmwood Plaza in West Hartford, which added approximately 79,000 square feet of new retail space. This was the only significant shopping center constructed during the study period, reflecting the dramatic slowdown in new development.
Following an alarming rise in the Greater Hartford vacancy rate during the prior study period from 10.6% to 13.1%, the region reversed the trend, lowering the level of unoccupied space to 11.8%. This equates to a reduction of unoccupied space of approximately 448,000 square feet, which stood at 4.4 million square feet at the close of the study period.
Submarkets
Similarly, vacancy rates in all Greater Hartford submarkets improved during the study period, a year after each suffered declining occupancy. Receiving the only “A” for effort, however, was the City of Hartford, which lowered its vacancy rate from 19.3% to 15.0%. However, it had the most room to improve and still remains the sector with the highest vacancy rate.
Nevertheless, all other sectors showed significant improvement, lowering vacancy rates by 1-2%, with the exception of the Northwest submarket, where the rate declined by 0.7%. But even though improvement was shown throughout the region, high vacancy remains a concern with the Northwest sector ending up as the only submarket in single digits at 9.0%.

Town Rankings
At the municipal level, the Town of Manchester remains the dominant retail community by total retail space, with approximately 5.6 million square feet of inventory, with no appreciable change from a year ago. Enfield, Hartford, West Hartford, and Newington follow, all encompassing between 2.5 and 3.0 million square feet of space. Among municipalities with at least 500,000 square feet of retail space, after holding the spot for the past three years, Simsbury no longer tops the list of healthiest retail communities. That honor now goes to Wethersfield, which has the lowest vacancy rate in the region at 4.0%. Much of the Top 10 remains the same as last year. The only addition to the list is Bolton, replacing Simsbury, which dropped out due to the closing of the local Borders store.
Although Hartford had the highest vacancy rate among submarkets in the Hartford region, it was not the worst among municipalities. Vacancy rates in both Berlin and East Hartford exceeded 20%, coming in at 23.9% and 22.5%, respectively. New Britain, East Windsor, and South Windsor also experienced higher vacancy rates than Hartford.

While other markets studied by KeyPoint Partners reported regional vacancy declines, Greater Hartford is the first to avoid vacancy declines in all size classifications. Vacancy among storefronts less than 2,500 square feet was 17.0% at the end of the 13-month period, clearly the worst performing category but still 140 basis points below the vacancy level of a year ago. For stores ranging between 2,500 and 4,999 square feet, the vacancy rate dropped from 14.7% to 12.8%. Until now, it was these smaller size categories, including significant numbers of independent retailers, which experienced continued erosion in occupancy levels within other New England regions. The most significant improvement occurred within the 10,000-24,999 and 25,000-49,999 square foot segments. These categories declined from 11.9% to 9.8% and 16.1% to 13.8%, respectively.

Among the smattering of retailers now occupying the previously vacant 10,000-24,999 square foot units are Aldi, Ulta, EMS, Tractor Supply, and DSW while PC Richards acquired the bulk of the 25,000-49,999 square foot spaces via former Circuit City stores. Stores of 100,000 square feet or more experienced no changes and remain near full occupancy.

The 2011 KeyPoint Report on the retail real estate marketplace for Greater Hartford, Connecticut focuses on changes in the region's retail activity, and examines supply, vacancy and absorption, retailer activity, and market composition by store size and retail categories between May 1, 2009 and June 1, 2010, a 13-month span. The Greater Hartford market includes 26 cities and towns and represents more than 835 square miles and approximately 808,700 persons, equating to 23% of the Connecticut total population.
Posted by KeyPoint Partners at 11:45 AM