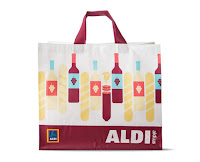 OBSERVATION: Bagging the Bags: I noted last month, in an observation about increasing sustainability practices in retail, that Wegmans will be phasing out plastic bags in all stores. Now Aldi has followed suit: The company already has removed plastic bags from nearly 500 stores with the goal to phase them out from all 2,200 locations by the end of 2023. At right: Aldi reusable bag

OBSERVATION: Real Virtual Reality: We’ve reported occassionally about online entities opening brick-and-mortar stores, Amazon chief among many. Now Meta (formerly Facebook) has opened its first brick-and-mortar space (on the company’s own campus in Burlingame, CA). Visitors can test-drive metaverse-y tech such as Portal, a video conferencing tablet, and Ray-Ban Stories, sunglasses with a hidden camera and speakers, and of course Meta’s own Quest VR headset.

OBSERVATION: Still Liking Stores: A recent post on Chain Store Age.com quotes research from customer engagement specialist Emarsys that says 54% of US consumers would rather shop in-store than by any other method. However, 2 in 5 (39%) consumers “couldn’t live without online shopping.” Consumers shop an average of two hours per week, says Emarsys, so retailers need to reach them where they want to shop. Other notable stats: despite the rise of online groceries, 38% of consumers prefer to buy food in-person than online; 21% prefer to shop for clothing online, while 20% prefer in-store.

OBSERVATION: Sweet Digital: Sweetgreen has a stated goal of 1,000 locations. But those locations won’t all be what - or where- you expect. Sweetgreen is something of a pioneer in digital service - the digital business accounted for 67% of its 2021 revenue; this affords them great flexibility in site selection, outside of their traditional urban footprint. In March, it opened its first drive-thru location, a “sweetlane” that features an observation window and order-ahead capability. This month it unveiled a digital-only pickup venue located in a residential neighborhood. Called “sweetgreen pickup kitchen,” the restaurant doesn’t have an inside dining area or service lines, only access to pickup shelves for grab-and-go. Guests can order via Sweetgreen’s website, app, and third-party delivery. Sweetgreen opened 31 stores last year, 18 of them outside of urban areas. It ended 201 with 150 locations (see News at left)

OBSERVATION: I, Robot Server: Speaking of restaurant technology, an article called Robots in Restaurants—No Longer Just a Fantasy by Amanda Baltazar on QSR.com notes that “The restaurant industry continues to suffer from an employee shortage…keeping employees happy and not overwhelmed is key…according to the National Restaurant Association’s 2021 report, 77% of quick-serve operations and 74% of fast casuals say they don’t have enough staff. At the same time, 78% of quick-serve operators and 68% of fast-casual chains say they expect technology and automation to help more with that this year”. One tech solution: Robot servers. Restaurant chain Rachel’s Kitchen leases Servi robots, by hospitality robot company Bear Robotics (photos below). “Servi has two primary uses: Employees load her up with food and plug in a table number. She then delivers that food and engages in some light chit-chat with customers…servers can also take Servi along when they bus tables, loading her with dirty dishes and sending her back to the dishroom”. Fast casual chain BurgerFi uses Patty the Robot by Rich Tech Robotics. “Patty is not intended to replace folks; it’s an augmentation of our staff and an extra pair of hands,” says Karl Goodhew, chief technology officer for the company. According to the article, customers enjoy the novelty factor of interacting with robots. They receive their food faster, and servers have more time to interact with customers. Look for server robots coming soon to a restaurant near you!

Posted by KeyPoint Partners at 12:25 PM No comments: 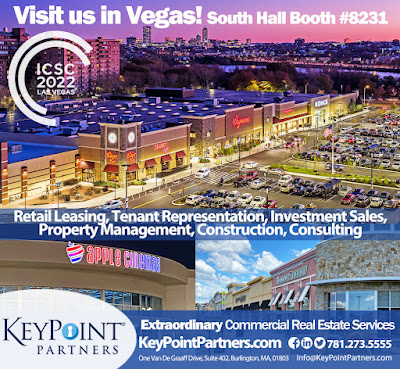 ICSC Las Vegas 2022: A team from KPP will attend the ICSC RECON at the Las Vegas Convention Center this month, for the first time since pre-pandemic. ICSC attendees can visit the team at Booth 8231 in South Hall, adjacent to Ahold...New Leasing Business: New assignments for the Leasing team include Wells Corner Shopping Center, Wells, ME...Investment Sales: VP of Investment Sales Jonathan Aron is handling the sale of a Walgreens in Greenfield, MA. He recently represented the Buyers in the purchase of a 7-Eleven location in New Babylon, NY and a Chase Bank in Waltham, MA...Team News: Stephanie Johnson has been promoted to Property Manager in the Burlington, MA Office.

Posted by KeyPoint Partners at 12:20 PM No comments: 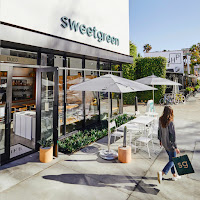 The Cheesecake Factory expects to open 15-16 restaurants, this year. The company ended Q1 with 208 US restaurants…In addition to six new leases earlier this year, Primark has signed three in upstate New York, New Jersey and Chicago…Wegmans is expanding its New York footprint into Long Island with 100,000 s/f store…Freddy’s Frozen Custard & Steakburgers has signed six multi-unit agreements, which will bring a total of 64 new locations to new and existing markets. The company is on track to open over 50 locations in 2022…Meta, formerly known as Facebook, opened its first brick-and-mortar space this month, on the company’s campus in Burlingame, CA. Meta Store will have demo areas where shoppers can try hardware products, including the Portal video calling device, Ray-Ban Stories smart glasses, and Meta Quest 2 virtual reality headsets…Pizza company 800 Degrees Go and REEF, a delivery and ghost kitchen concept, are planning to open 500 800 Degrees Go locations in the next five years…At Home opened three new locations in April, for a total of 246 stores in 46 states...Papa John’s expects to open 1,800 net new restaurants worldwide over the next four years. Papa John’s operates more than 5,500 locations around the world, including 3,354 in the US...Sweetgreen plans at least 35 openings this year, with a goal to reach 1,000 units by decade’s close. Sweetgreen ended 2021 with 150 locations...CycleBar opened its 250th studio, in Parker, CO...Amazon Go’s newest location opened outside of Seattle, its first suburban location. Amazon plans to open more Amazon Go stores in suburbs with larger footprints than its urban stores…Shake Shack is more than halfway to its goal of 450 domestic restaurants; the brand ended Q1 with 252 US outlets...Charleys Philly Steaks opened its 700th location. The chain expects to have 2,000 locations by 2026…Clean Juice, the organic juice bar franchise, signed its 200th unit...Best Buy will open four outlet stores this summer and fall, in Chicago, Houston, Phoenix, and Manassas, VA, part of Best Buy’s plan to double its outlet store count in the next year, from its current 16 locations to 32...Five Below will open its first store in an outlet center, at Outlets of Mississippi, early this summer...Warby Parker opened eight stores, bringing its count to 169 locations. They’re on track to add 40 new stores this year, ending 2022 with 201 stores.

Posted by KeyPoint Partners at 12:18 PM No comments:

No notable Decelerating news this month.

Posted by KeyPoint Partners at 12:16 PM No comments:

An affiliate of The Bulfinch Cos. Inc. is seeking to add another floor onto the Neiman Marcus store at the Natick Mall and convert it into lab-and-office space. Bulfinch bought the property in December for $12.6 million. Neiman Marcus plans to vacate by early fall...Tree House Brewing Co. is buying the Tewksbury

(MA) Country Club for its latest brewery. The craft brewery, whose main facility is in Charlton, opened locations last year in Deerfield and Sandwich...Michele Lopriore, a women’s footwear brand from Italy, has opened a store in Boston’s Copley Place, its 7th US location...Two shopping centers on Cape Cod in sold for more than $120 million: Southwind Plaza and Falmouth Landing. The buyers were TA Realty (Falmouth Landing) and Bandera Ventures (Southwind Plaza)... Showcase plans to open 27 stores in 12 states by the end of summer, the largest expansion in the company’s history. The company currently operates 109 stores in Canada, and 10 in the US…Mango is accelerating US expansion, starting with a three-level, 23,000 s/f flagship on Fifth Avenue in NYC. The company plans to open 30 US stores in the next three years. Mango operates more than 2,400 stores around the world.
Posted by KeyPoint Partners at 12:16 PM No comments:

Source: The Conference Board - www.conference-board.org

Posted by KeyPoint Partners at 12:13 PM No comments: 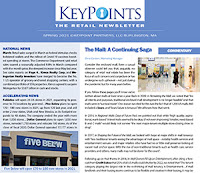