Only a year ago it seemed that the worst was behind us, with retail store closings down dramatically: according to tracking by Coresight Research, there were 5,524 store closings in 2018, down 30% from an all-time high of 8,139 in 2017. Well, records are made to be broken and 2019 will be the year it happens. Coresight reports that 7,062 stores have been closed by U.S. retailers so far this year, and if this pace continues, the research firm projects more than 12,000 store closings by year end, blowing away the 2017 high.

These numbers are offset somewhat by store openings also reported by Coresight. Last year 3,258 stores opened - but that figure still reflects an incremental loss of 2,266 units. This year Coresight indicates that 3,019 stores have opened, so it appears that store openings should be significantly higher at the end of 2019 than in the prior year. Based on these figures, however, the gap between openings and closings will grow immensely.

Nevertheless, there are regions of the country that are doing much better than others. New retail development is announced regularly in many of the major metros in parts of the West Coast and Sunbelt states, particularly California, Texas, and Florida. All these areas benefit from significant population growth and economic development, resulting in higher retail demand. These states generally are in better shape than some Rust Belt states and a few states in the Deep South that have been held back by stagnant economies.

So how are we doing here in the Northeast? As most of our readers know, KeyPoint Partners tracks retail changes in the marketplace and reports on these changes by utilizing our robust, proprietary retail database known as GRIID™, which maintains detailed information on virtually all retail properties in three key regions: Eastern Massachusetts/Greater Boston, Southern New Hampshire and Greater Hartford, Connecticut, which includes approximately 44% of all retail space in New England. GRIID™ has information on nearly 262 million square feet of retail space and nearly 60,000 retail establishments.

For this article, we thought it would be interesting to go back in time for a long-term look at Eastern Massachusetts in order to evaluate the annual change in retail inventory and vacancy throughout the region. We reviewed annual levels as far back as 2003; here’s what we found:

For starters, while retail square footage in the region continues its gradual climb, increasing about 15% since 2003, the change in the number of stores has been nominal. In 2003 the store count was approximately 46,000 units; today it is marginally higher at 46,700. We’ve seen the average store size increase, however, from approximately 3,700 square feet to 4,200 square feet.

With regard to vacancy, the square footage of unoccupied space has increased 71% since 2003 while the number of vacancies has more than doubled. In 2003, only 5.7% of all storefronts were vacant. That number has risen to 12.8% today. The percentage began to spike in 2005, hitting double-digit percentages in 2011 when 11.8% of all stores were vacant. It has remained in double-digits ever since. Within the same time frame, the size of the average vacancy has decreased significantly from 4,100 square feet to 3,100 square feet, suggesting that small tenants have been the most vulnerable during this time frame. The table below illustrates these changes during the 2003-2019 period:
Currently, the vacancy rate in the region stands at 9.4%. Only once since the onset of the Great Recession in December 2007 has the annual vacancy rate gone below 8.5%, in 2013. Prior to the recession, mid-single digit vacancy rates were the norm. Unfortunately the recession coincided with the retail industry undergoing a considerable shift by consumers away from brick-and-mortar retail purchases and toward online shopping. According to Internet Retailer, ecommerce represented 5.1% of total retail purchases in 2007. That figure had nearly tripled to 14.3% in 2018.

If we ever see vacancy rates drop back to 2003 levels, it will have to be a gradual process of converting unoccupied space to non-retail use or mixed-use in conjunction with the currently diminutive pace of new development. In the meantime, however, at least in this region, we’re experiencing the new norm.

Posted by KeyPoint Partners at 1:13 PM No comments:

See what's for sale at our Investment Sales listing page: 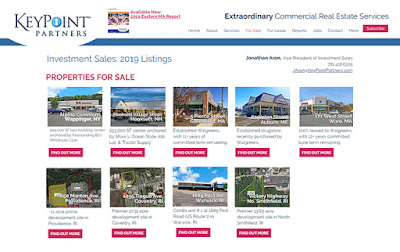 Properties For Sale
Posted by KeyPoint Partners at 1:09 PM No comments:

The Commerce Department said US retail sales increased more than expected in June, pointing to strong consumer spending. Retail sales rose 0.4% last month as households stepped up purchases of motor vehicles and a variety of other goods. Data for May was revised slightly down to show retail sales increasing 0.4%, instead of 0.5% as previously reported. Excluding automobiles, gasoline, building materials and food services, retail sales jumped 0.7% last month after an upwardly revised 0.6% increase in May. See sales reports below...Kohl’s is now accepting unpackaged Amazon returns at its more than 1,100 stores nationwide. Kohl’s and Amazon previously piloted the program in some 100 Kohl stores in the Los Angeles, Chicago, and Milwaukee markets.

Posted by KeyPoint Partners at 1:07 PM No comments:

Hooters of America has been acquired by Nord Bay Capital and TriArtisan Capital Advisors. Details of the deal were not disclosed. Previous owners Chanticleer Holdings and H.I.G. Capital will retain stakes in the chain. Hooters of America is the franchisor and operator of more than 430 Hooters restaurants in 38 states and 27 countries…Duluth Trading Co. opened its first store in Georgia last month, Duluth’s 55th location nationwide. The company has opened 10 to 11 stores in 2018 and plans to open another 15 this year…Qdoba Mexican Eats and multi-unit operator Premier Queso Kings, LLC are partnering for a 20-unit deal to develop locations in Atlanta and Alabama. The first Atlanta restaurant should open later this year or early next year. Qdoba has more than 750 restaurants in the US and Canada. Premier Queso Kings owns and operates more than 200 restaurants…VSP Global has entered into a definitive agreement to acquire  Visionworks, subject to completion of regulatory approval. With a footprint of more than 700 stores in nearly 40 states, the Visionworks acquisition will be the single largest VSP network investment in the company’s history... Target plans to open 3 more small-format stores on or near university campuses: a 20,000 s/f store on the University of Kentucky campus, a 22,000 s/f store on the Michigan State University campus; and a 21,000 s/f store near the University of Washington in Seattle. Currently, Target operates almost 100 small-format stores, 23 of which are on or near college campuses in 13 states, including 10 locations opened last year. The retailer said it’s looking to open about 30 of the small stores annually over the next several years…uBreakiFix opened 25 new stores in the second quarter, bringing the brand’s total footprint to 522 stores across North America...Big Lots will re-open 17 remodeled stores throughout the Nashville area this month. Big Lots operates approximately 1,400 stores in 47 states... Primark is expanding its US footprint with its first store in the Midwest, in downtown Chicago. Primark will take over a 45,000 s/f building in the heart of the Loop. Primark, based in Ireland and owned by Associated British Foods, opened its first US store in Boston in 2015. The retailer now has 9 US locations, all in the Northeast. Primark is on track to open stores at Sawgrass Malls, Sunrise, FL, and at the American Dream mega-mall in New Jersey during the next 12 months…Crate and Barrel opened its first-ever in-store restaurant, “The Table at Crate,” in its store at Oakbrook Center, Oak Brook, Il. The full-service restaurant is a collaboration between Crate and Barrel and Cornerstone Restaurant Group, its first venture into the retail space. The Table at Crate integrates the dining and retail experience across two levels of indoor and outdoor space. Most of the featured tableware, chairs and table are for sale in the store. The Table at Crate is open for lunch, afternoon tea, and dinner, plus coffee service throughout the day. Crate & Barrel plans to increase the number of new stores with integrated restaurants, wine vaults, and barista bars... ZIPS Dry Cleaners active franchise pipeline includes more than 250 stores set to open over the next several years, adding markets such as Dallas, Houston, Atlanta, Chicago, Portland, OR, and Columbus, OH in the near future, with another 20 markets in the next five years. ZIPS currently has more than 60 locations... Cinnamon roll bakery Cinnaholic has opened 10 franchise locations since January in new markets including New Jersey, Houston, Phoenix and Ottawa, and Ontario, bringing its total location count to 38 units…Lululemon Athletica has opened its largest experiential store to date, a two-level, 20,000 s/f location in Chicago’s Lincoln Park neighborhood. It includes the company’s first-ever restaurant and 3 studio spaces.

Posted by KeyPoint Partners at 1:06 PM No comments:

Pier 1 ended the quarter with 967 stores, down 30 a the year ago. The retailer will close 57 locations in the current fiscal year, higher than the chain’s previous estimate of 45, which it gave back in April....Restaurants Unlimited, a Seattle-based company that operates 35 restaurants in 6 states, has filed for Chapter 11 bankruptcy protection. RUI runs restaurants under the names of Clinkerdagger, Cutters Crabhouse, Fondi Pizzeria, Henry’s Tavern, Horatio’s, Kincaid’s Maggie Bluffs, Manzana, Newport Seafood Grill, Palisade, Palomino, Portland City Grill, Portland Seafood Company, Scott’s Bar and Grill, Simon & Seafort’s, Skate’s on the Bay, Stanford’s and Stanley & Seafort’s…Boston Market has closed 45 stores due to underperformance. The chain, owned by Sun Capital Partners Inc., closed 6 restaurants on June 30, while the remaining 39 closed on July 7... Jewelry and accessories chain Charming Charlie has filed Chapter 11 bankruptcy and plans to close all 261 of its stores. The company, which operated in 38 states, had shut down 100 stores as part of an earlier bankruptcy filing last April. Going out of business sales are already underway at many locations and the chain expects to cease all operations by Aug. 31. 2 years ago, there were 390 Charming Charlie stores spread across the US, Canada the Middle East and the Philippines.
Posted by KeyPoint Partners at 1:05 PM No comments:

Tatte bakery cafe is planning a 30,000 s/f production facility, test kitchen, office and cafe to anchor National Development’s planned mixed-use project at the vacant former Cole Hersee building at 60-70 Old Colony Ave. in South Boston…The Lower Depths, a Kenmore Square beer bar known for its tater tots and diverse beer selection, has closed…Wachusett Brewing Co.  will open a taproom in the former John Harvard’s Ale House in the basement of The Garage mall in Harvard Square, which closed at the end of May. This will be the third taproom for the brewery, which also announced that it will open a taproom at the Worcester Public Market. Both locations are on schedule to open in September or October... Local coffee and sandwich shop Revival Café & Kitchen plans to open a location at 103 Newbury St.The company has 1 location in Cambridge, near Alewife, and a 2nd location in Somerville’s Davis Square.
Posted by KeyPoint Partners at 1:04 PM No comments:

Work has started on overhauling the former Sears store at the Mall of New Hampshire, Manchester. About half space will become a Dick’s Sporting Goods store before year’s end. A Dave & Buster’s restaurant is slated to open in 2020 in the other half of the space. The renovation work will cost more than $6.4 million, according to documents filed with the city... American Dream, the 3 million s/f retail and entertainment destination located next to Met Life Stadium in East Rutherford, NJ, will open on Friday, October 25, 2019. It is the first time the developer, Triple Five Group, has set a specific date for the opening. In addition to a host of retailers, many of the center’s entertainment attractions will launch on opening day, including Nickelodeon Universe Theme Park, DreamWorks Water Park, Big Snow Ski and Snowboard Park, the center’s NHL‐size skating and hockey facility, and Angry Birds 18‐hole miniature golf course.
Posted by KeyPoint Partners at 1:04 PM No comments: 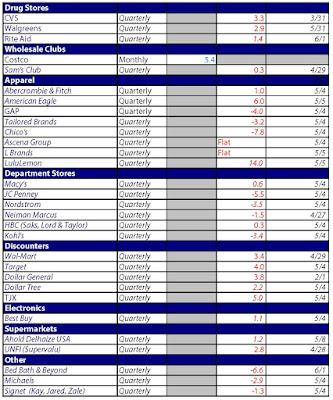 Notes: figures gathered from individual company websites, press releases, and Federal filings.  Not all companies report all figures; results not reported will be marked “n/r”. Quarterly results will be updated when available; quarterly figures are shown in italics. Figures from companies not calculated to one decimal point automatically received an ending digit of 0.
Posted by KeyPoint Partners at 1:03 PM No comments: 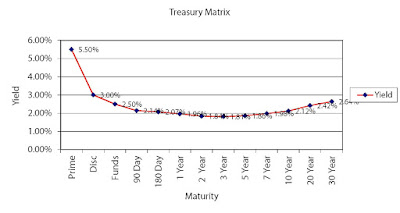 Source: The Conference Board - www.conference-board.org
Posted by KeyPoint Partners at 12:59 PM No comments: