Mall Productivity Numbers: Now and Then 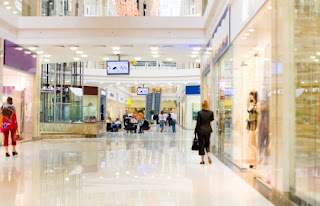 If you believe what you read, you may be wondering how much longer you’ll be shopping at your local mall. In the past year some of the headlines hitting the news include:


The list is endless, but you get the point. Enclosed malls are generally in decline. Department store closings already announced will continue well beyond this year and it is a virtual certainty that more will be added to the hit list.  We’ve also seen a slew of bankruptcies by mall-based teens and juniors apparel chains that have been impacted by several factors including the growth of fast fashion retailers, the rise of Amazon apparel sales, and a broad shift in shopping patterns by Millennials who have exhibited a propensity to shop online and not at the mall. All of this is taking a toll on occupancy levels, often requiring landlords of B and C malls to back-fill with temporary tenants and mom-and-pops.

But how bad is it? One perspective may come from mall productivity, or sales per square foot of comparable tenants (those that were open at least a year). Using International Council of Shopping Centers (ICSC) data back to 1996, we compared the average annual mall productivity level of New England shopping centers to that of the total US inventory, to get an historical view of how malls have been performing from their heyday until now. 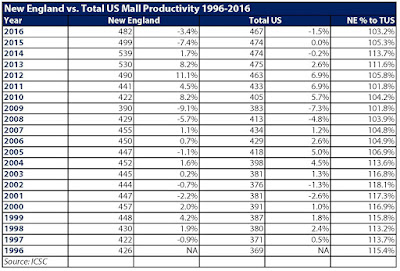 What the table doesn’t address is the fact that comp stores are inevitably changing. The overall quality of stores included in the average mall productivity of 1996, or even 2006, is a far cry from the comp store mix in 2016. Many of the highly productive specialty stores that preferred mall shop space a couple of decades ago have relocated to lifestyle centers as new development occurred. Many others have simply gone out of business. We also have had anchor stores replaced by new anchors, a trend which allowed discounters into the malls for the first time.

And I would be remiss if I didn’t mention the “A” word. As a matter of fact, to coincide with our 20-year review, Amazon’s unbroken 20-year streak of double-digit revenue growth shows no sign of slowing this year, following its announcement that first-quarter sales were up (better find a chair) 22.6%! Continuing in the same vein, traditional brick-and-mortar retailers are shifting much of their capex away from store expansion and into e-commerce efforts, which brings future utilization of comp store sales as a measurement of performance into question, not just for malls but for the retailers themselves.

The bottom line here is: the mall business, just like the rest of the retail world, isn’t getting better.

New Employees: Gina Piccirilli joined the Plymouth, MA office as an Administrative Assistant...KeyPoint Partners has moved up one ranking from #7 to #6 on the latest list of Largest Commercial Property Managers in Massachusetts (as of 2/1/17), as published in the Boston Business Journal. The list is compiled by the BBJ from a survey of property management firms. At the time of the survey, KPP managed nearly 11,000,000 square feet in MA, and nearly 22,000,000 overall.
Posted by KeyPoint Partners at 12:37 PM No comments:

US retail sales fell for a second straight month, according to the Commerce Department. Sales fell 0.2%, led by a decline in the auto industry. Retail sales excluding autos were little changed.  Sales declined in 6 of 13 major retail categories in March. Among retailers still reporting monthly sales, L Brands was down 10.0% and Costco was up 6.0%. See our sales reports below.

Posted by KeyPoint Partners at 12:36 PM No comments:

Apple opened 3 stores last month, including a flagship at Brickell City Center, a new mixed-use development  in Miami, Apple’s 5th location in the area...Tropical Smoothie opened 86 restaurants in 2016, including its 500th unit, and has franchise agreements to develop more than 160 US units…Target is set to open a superstore this fall in NYC’s Herald’s Square. The 43,000 s/f store will be a part of a complex that consists of 92,000 s/f of retail space, including a Sephora and Foot Locker. This will be the third Target in Manhattan and the 13th in the five boroughs. Target also has plans to open 4 more New York stores by the end of 2019…Bibibop Asian Grill is the buyer of the leases for 15 closed ShopHouse Asian Kitchen locations, a deal that will double the chain’s size virtually overnight. The deal with Chipotle Mexican Grill Inc. for the shuttered ShopHouse locations will give the company 28 restaurants...Wegmans will open two new stores in northern New Jersey: a 113,000 s/f store in Hanover, and a 108,000 s/f store in Montvale. Both stores will be located about 25 miles from Manhattan, where Wegmans plans to open its first store next year...Duluth Trading Co. will open 10 to 12 stores in fiscal 2017. Stores opened recently opened in Noblesville, IN and Burlington, MA, giving the company 18 shops...Five Below will open 100 stores in 2017, including its first locations in CA. The chain opened 85 net new stores in 2016…Oak Hill Capital Partners has agreed to buy Checkers Drive-In Restaurants Inc., from Sentinel Capital Partners in a deal valued at $525 million. Checkers operates Checkers and Rally’s brands. The company has 840 locations in 29 states under the two brands... Home décor retailer At Home plans to open 25 new stores this year, with the potential for 500 more locations long term. At Home ended the year with 126 stores…Walmart rolled out a new prototype for its Neighborhood Market grocery-store concept in its new 46,000 s/f store in Myrtle Beach, SC…Cava, the company behind Cava Grill restaurants, will expand to 3 new markets in 2018, including Boston. The company will also expand in existing markets, including NYC, with 6 locations planned for 2017. There are currently 27 Cava Grill locations...Ollie’s Bargain Outlet Holdings Inc. expects to open 33 to 35 stores in 2017, with no planned closures. Ollie’s ended the year with a total of 234 stores in 19 states...Trader Joe’s plans to open 3 new NYC stores in 2017, plus one in Hoboken, NJ…Stage Stores, Inc. will acquire select assets of Gordmans Stores, Inc. through a bankruptcy auction. The transaction is expected to close during Stage’s first quarter of fiscal 2017, subject to the approval of the bankruptcy court and customary closing conditions. Stage’s will acquire a minimum of 50 Gordmans leases, with rights to assume leases for an additional 7 stores; all of Gordmans’ inventory, furniture, fixtures, equipment and other assets at the 57 locations and 7 trademarks and other intellectual property…South Moon Under will open its first stores in the South in April, with locations in the  Atlanta, GA area. South Moon Under plans to open more than 20 stores by 2019. South Moon Under currently has 24 East Coast and Mid-Atlantic locations... Dollar General confirmed its plans to buy all 323 Dollar Express stores in 36 states. Terms of the Dollar Express deal were not disclosed. The acquisition is subject to certain closing conditions and regulatory approval...Dollarama, which operates some 1,000 stores across Canada, has revised its long-term target from 1,400 locations to 1,700….British lifestyle brand The White Company will open its first US store this summer, a 3,000 s/f flagship in Manhattan, following strong growth  in its US online revenue.  The White Company operates more than 50 stores across the UK…Panera Bread has been acquired by JAB Holding Company, the investment arm of the Reimanns of Germany, for $7.5 billion, including the assumption of about $340 million in debt. JAB’s US holdings include Krispy Kreme Caribou Coffee, Einstein Noah Restaurant Group Inc., Peet’s Coffee & Tea, and Keurig Green Mountain…TBC Corp. has opened 8 new NTB Tire & Service Centers in South Carolina, Georgia, Massachusetts, Tennessee, Minnesota and Alabama...Forever 21 plans to open more than 40 F21 Red stores across the US in 2017, bringing the brand’s total to more than 70 locations by year-end. Forever 21 launched F21 Red in 2014 as a value-oriented concept. Forever 21 operates more than 815 stores in 57 countries…7-Eleven is buying 1,110 convenience stores, mostly on the East Coast and Texas, from Sunoco in a deal valued at $3.3 billion. 7-Eleven has grown from 29,000 worldwide stores in 2006 to 61,500 in 2016. US store count increased over the last decade from 5,500 to 8,900. This acquisition will bring 7-Eleven’s total number of stores to 9,815 in the US and Canada... Supervalu Inc. is merging with Unified Grocers in a $375 million deal. Together, Supervalu and Unified operate more than 3,000 stores. The acquisition provides new growth opportunities across multiple geographies...Sporting goods manufacturers Mizuno has entered the US retail arena with the opening of The Mizuno Experience Center, a 3,800 s/f Experience Center at The Battery Atlanta.

Posted by KeyPoint Partners at 12:35 PM No comments:

Payless ShoeSource filed for Chapter 11 bankruptcy protection. The retailer, which has some  4,400 locations in more than 30 countries, plans to immediately close nearly 400 US stores.…Bebe Stores Inc. plans to shut all 168 of its stores nationwide by the end of May. The announcement was disclosed in a filing  with the U.S. Securities and Exchange Commission...GameStop Corp. plans to close at least 150 stores this year and expand nongaming businesses...Radio Shack has filed bankruptcy and is in the process of closing hundreds of stores, liquidating assets and evaluating the fates of 1,000 others. This is the second Chapter 11 filing Radio Shack has made in two years... Ignite Restaurant Group Inc., parent to the Joe’s Crab Shack and Brick House Tavern + Tap chains, has named a new CEO as it looks for a buyer or bankruptcy protection. Ignite has 114 Joe’s Crab Shack restaurants in 31 states, and 25 Brick House units in 11 states...J.C. Penney stores at the King of Prussia Mall, Philadelphia Mills, and Willow Grove Park malls, will begin liquidating this month, in preparation for permanent closure in June. Last month, Penneys announced that 138 nationwide…HHGregg is planning to begin liquidating its assets after failing to find a buyer. The company expects to close all of its 220 US stores by the end of May...Eastern Outfitters LLC, parent company of Eastern Mountain Sports and Bob’s Store, wants to close about half of its store - including 27 of its 51 EMS stores and 21 of its 35 Bob’s Stores. The company filed for bankruptcy protection in February. The plan to close the stores still needs bankruptcy court approval...Rue21 will shutter about 400 stores nationwide, about a third of its brick-and-mortar portfolio, leaving about 700 remaining US stores...Applebee’s will close between 40 and 60 locations this year. According to DineEquity, Applebee’s parent company. Applebee’s closed 46 locations in 2016.
Posted by KeyPoint Partners at 12:31 PM No comments:

Philadelphia-based salad and stir-fry chain honeygrow plans to open its first Boston location this August in a 2,598 s/f space at the Viridian apartments, adjacent to Fenway Park... Boston food truck Cookie Monstah, known for its cookies and ice cream sandwiches, opened its first brick-and-mortar location this month, on Route 1 in Danvers... Legal Sea Foods opened a new fast-casual concept, Legal Fish Bowl, in Cambridge’s Kendall Square. The restaurant offers a choice of bowls with fish, chicken or vegetables. Legal Sea Foods has more than 30 restaurants on the East Coast... Dave’s Fresh Marketplace will open a 29,077 s/f store in Cranston, RI, their 10th location... In 2015, City Sports Inc., the Boston-based sporting goods retailer, filed for bankruptcy and closed its 26 stores. Recently, the company has begun selling merchandise on its website, and it plans to open stores in large cities including Boston, New York, Philadelphia and Washington, D.C.
Posted by KeyPoint Partners at 12:30 PM No comments: 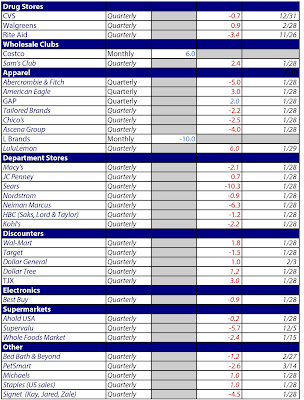 Notes: figures gathered from individual company websites, press releases, and Federal filings.  Not all companies report all figures; results not reported will be marked “n/r”. Quarterly results will be updated when available; quarterly figures are shown in italics. Figures from companies not calculated to one decimal point automatically received an ending digit of 0.
Posted by KeyPoint Partners at 12:12 PM No comments: 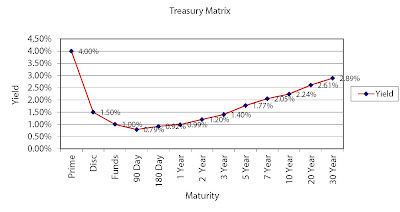 Source: The Conference Board - www.conference-board.org
Posted by KeyPoint Partners at 12:07 PM No comments: