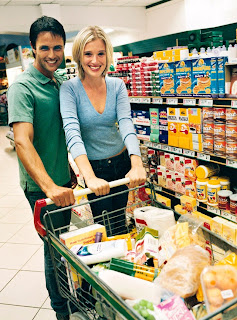 With so many dramatic changes in the grocery industry during the past decade, and armed with fresh data from the new 10-year historical section of our recently-released KeyPoint Report on Eastern Massachusetts & Greater Boston, it's a good time to check on the market share of traditional grocery chains in terms of historical store growth.

I’ll spare you the suspense: there has been no substantial change in the relative market positions of The Big Three regional grocery chains between 2004 and 2013. Stop & Shop, Shaw’s, and Market Basket remain at the top of the “food chain” (pun intended) with respect to regional market share within this industry sector. I’ll let the charts below speak for themselves, but there are a few items worth noting:

Although Stop & Shop remains the dominant grocer in Eastern Massachusetts, it was nosed out by Market Basket for the highest square footage gain, 768,900 square feet to 756,700 square feet, largely due to super-sized store additions such as the 132,100 square foot Chelsea store and the 100,400 square foot Burlington unit.

Hannaford scored the highest in percentage gain of incremental space in the 2004-2013 timeframe at 301%, but it couldn’t have done it without the 2004 acquisition of nineteen Victory Supermarkets (some of which were outside the Eastern Massachusetts region).

Other than Victory, Save-A-Lot was the only chain to slip out of the top eight. These two have been replaced by Trader Joe’s and value grocer Price Rite.

The biggest loser, which should come as no surprise, is Shaw’s. This troubled grocer was the only chain among the market leaders to show a decline in retail space. Retail space among all other chains, and independents that fall into the “Other” category, declined a substantial 861,100 square feet, or 31%, dropping from 2.8 million to 1.9 million square feet. In 2004, “Other” represented 18% of the space and now represents only 11%. The fallout includes such chains as Johnnie’s Foodmaster, AJ Seabra, Hi Lo, and RoJack’s, as well as a slew of smaller chains. Highly-touted recent entrants into the region (and therefore outside the purview of the historical data) include Wegmans, Aldi, and Fresh Market. 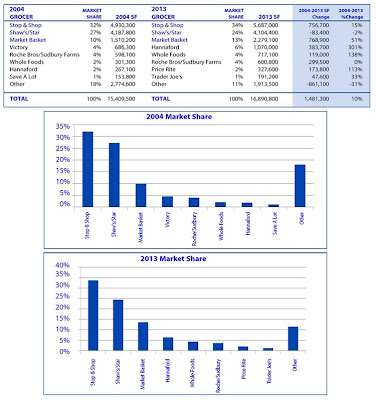 Of course we’d be remiss if we didn’t mention the other grocery competitors taking a piece of the food expenditure pie: wholesale clubs, dollar stores, Walmart Supercenters, and Targets are all grabbing significant shares of the grocery market. It would be compelling to analyze the growth of these non-traditionals against the 10% overall growth experienced by the traditional grocery sector during the 2004-2013 period to better grasp their impact on the industry  - but that’s a subject for another day.


Bob Sheehan, Vice President of Research
BSheehan@KeyPointPartners.com
Posted by KeyPoint Partners at 10:49 AM No comments:

July retail sales missed estimates forecast by the International Council of Shopping Centers. The ICSC’s tally of retailers’ comparable store sales showed an increase of 4.2% over the previous year. The ICSC had estimated that July sales would climb 5 to 6%. The tally was based on 13 retailers. L Brands (Limited) was up 3.0%, Gap rose 1.0%, Costco gained 4.0%, Rite Aid was up 1.3%, and Walgreen’s rose 2.3%.  See our sales report below.
Posted by KeyPoint Partners at 10:36 AM No comments:

Cabela’s Inc. will open four new stores in 2014, two in Georgia and one each in Montana and Ontario, Canada. Cabela’s currently operates 45 stores across North America with plans to open an additional 19 over the next two years...Luxury retailer Saks is being purchased by Hudson's Bay Co., parent of Lord & Taylor, for approximately $2.4 billion. Saks will continue to run as a separate company under Hudson's Bay and will have its own merchandising, marketing and store operations employees. Key management personnel are expected to remain with the company. Saks had 42 Saks Fifth Avenue stores and 66 Saks Fifth Avenue Off 5th stores at the first quarter's end. Hudson's Bay was founded in 1670 as a trading firm for furs and other goods. It is considered the oldest company in operation in North America...Whole Foods Market has signed 50 new leases over the last 12 months, according to its CEO. The company sees potential for 1,000 US stores. It currently operates 355 US locations...Candy emporium Sweet! Hollywood opened its flagship location in Hollywood, CA, featuring more than 300 types of chocolate bars, more than 200 types of gummy candies, 140 flavors of chewing gum, and 250 types of lollipops. Guests can create custom candy bars and sample exotic sweets from across the globe. Sweet! Hollywood plans to expand internationally...rue21, inc. opened their first rueGuy stores in New York, Texas, and Ohio. The approximately 6,000 s/f stores are the first of seven slated to open across the US in August. The Company is on target to open about 20 rueGuy stores by the end of the year. rue21 currently operates 959 stores in 47 states...AT&T unveiled its newest store design in LaGrange, Ill. The store is built around the customer experience, with a goal of providing a glimpse of what the future of retail will look like. The new design will be rolled out at new and redesigned store locations across the country, and continuing into 2014...Fashion/accessory retailer Rabeanco opened its first US storefront, in Arcadia, CA, the first of three US locations the company plans to open in 2013...American Apparel has acquired New York City based independent fashion boutique Oak. Oak will operate as a separate division under the guidance of its founders and current top executives. The news was a surprise to many as American Apparel has been facing serious financial struggles, weighted by a significant debt, which has put it in the red since 2009. Terms of the deal were not disclosed...Macy’s has reached an agreement with Lids Sports Group to offer licensed departments called Locker Room by Lids to sell Lids merchandise both in Macy’s stores and on the retailer’s website. Lids Sports Group will operate the departments, which will be the exclusive source of Macy’s in-store team sportswear. Plans call for the departments to be piloted in approximately 25 Macy’s stores and on macys.com in fall 2013, and an additional 175 in-store departments out in spring 2014 as part of the initial phase. Macy’s will be the exclusive US department store with Locker Room by Lids locations...Smashburger has added five new franchise partners, totaling a combined commitment for 19 new US franchise units. This brings Smashburger’s total active franchise pipeline to approximately 300 locations, which are expected to open over the next several years...Fashion retailer Marc Jacobs will open his first store dedicated to cosmetics and beauty items, a 500 s/f store in Manhattan...Lowe’s Inc. is the sole bidder for Orchard Supply Hardware, and will acquire 72 of the bankrupt retailer’s stores for $205 million. The move will boost Lowe’s store count in California, where the home improvement retailer currently operates 110 stores. Orchard Supply will operate as a separate division of Lowe’s, retaining the company’s current management. Lowe’s will present the acquisition plan to a bankruptcy court judge on Aug. 20 for approval and hopes to complete the acquisition by the end of the month. Orchard Supply operates smaller stores than Lowe’s. Its stores average 36,000 s/f, compared with Lowe’s at 110,000 s/f. Orchard Supply’s stores are clustered around California’s big cities, including Los Angeles, San Francisco and San Jose. Orchard Supply operates 91 stores. Lowe’s will acquire the 72 that best fit its strategy, and plans to open more Orchard Supply stores in the future...Field & Stream, the newest specialty retail prototype from Dick's Sporting Goods will be open this month in southwestern Pennsylvania, in a 50,000 s/f converted Dick's store...Toys "R" Us Inc. will open more than 100 stores globally this year. The openings include new locations,  relocation and conversion of 14 stores to the Side-by-Side format, and 22 new licensed stores. The new stores are located throughout 21 of the 36 countries in which Toys "R" Us currently has a presence. In the US Toys "R" Us will open 19 new, converted or relocated stores, including nine new outlet stores bringing the total number of U.S. outlet locations to 25. The retailer operates more than 870 Toys "R" Us and Babies "R" Us locations in the US and Puerto Rico as well as hundreds of stores abroad.

Posted by KeyPoint Partners at 10:35 AM No comments:

Blockbuster LLC plans to shutter 100 US stores during the current third quarter, leaving it with 350 locations in operation. At its peak in 2004, Blockbuster operated 9,000 stores in 17 countries and employed 60,000 people.
Posted by KeyPoint Partners at 10:32 AM No comments:

The Crossings, Newington, NH is hosting a farmers market in the Trader Joe's parking lot. Seacoast Growers Association, which runs farmers markets in Durham, Dover, Exeter and Portsmouth, will operate the market, which will be open Tuesdays for an eight-week trial run, and if it goes well, will be extended through the rest of the season. KeyPoint Partners manages and leases The Crossings...Shaw's Supermarkets is closing six New Hampshire locations by Sept. 2, with Manchester, Keene, Seabrook, Goffstown, Tilton and West Lebanon each scheduled to lose a store. The company launched several initiatives recently to regain customer share from competitors like Market Basket and Hannaford, but could not forestall the closures. In related NH supermarket news, Stop & Shop will close six New Hampshire supermarkets and gas stations on Sept. 21, and will no longer have a presence in New Hampshire. The locations include Bedford, Hudson, Exeter, Milford, and two in Manchester. The stores range in size from 55,000 square feet to 65,000 square feet, although the one in Manchester is about 80,000 square feet...Boylston Properties and the Wilder Cos. paid $70.5 million for the Arsenal Mall and adjacent Harvard Vanguard Medical Associates building on Arsenal Street in Watertown, MA. The firms also acquired the Golfsmith building, an adjacent property located between the Arsenal Mall and The Home Depot. Arsenal Mall, previously owned by Simon Property Group, is home to Sports Authority, Old Navy, Marshalls, Gap Outlet, Forever 21, Chipotle, Bath & Body Works, Ann Taylor Factory Store, and Victoria’s Secret...The Patrick administration selected a developer to build a hotel and retail complex on Boston’s Rose Fitzgerald Kennedy Greenway. Normandy Real Estate Partners will add several new restaurants, a pavilion for the Boston Harbor Islands, public art installations, and a carousel that will open Labor Day weekend. Normandy’s building, to reach up to 10 stories, will anchor a district of food businesses that will center around the Haymarket pushcart vendors and include an indoor farmers market above the Haymarket MBTA station, as well as several restaurants and specialty food stores. The firm is partnering on the project with the real estate firm Jones Lang LaSalle...Nespresso announced the opening of its redesigned 2,400 s/f flagship store in Boston's Back Bay. The redesign is the latest indication of the brand’s commitment to expanding its US presence.
Posted by KeyPoint Partners at 10:31 AM No comments: 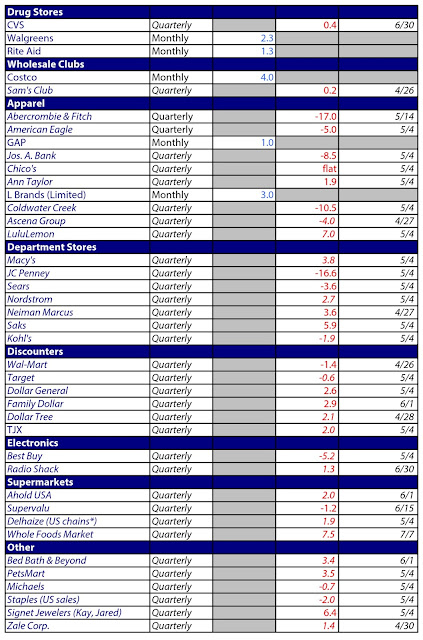 Notes: figures gathered from individual company websites, press releases, and Federal filings.  Not all companies report all figures; results not reported will be marked “n/r”. Quarterly results will be updated when available; quarterly figures are shown in italics. Figures from companies not calculated to one decimal point automatically received an ending digit of 0.
Posted by KeyPoint Partners at 10:29 AM No comments:

Source: U.S. Department of Commerce - commerce.gov
Posted by KeyPoint Partners at 10:26 AM No comments: 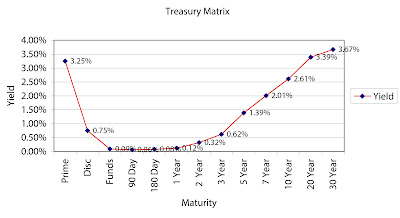 Treasury Yield Sources:  federalreserve.gov; ustreas.gov
Posted by KeyPoint Partners at 10:25 AM No comments:

Source: The Conference Board - www.conference-board.org
Posted by KeyPoint Partners at 10:24 AM No comments:

Manufacturing expanded in July as the PMI™ registered 55.4 percent, an increase of 4.5 percentage points when compared to June's reading of 50.9 percent. July's reading of 55.4 percent reflects the sixth month of growth, and the highest overall PMI™ reading, in the first seven months of 2013. A reading above 50 percent indicates that the manufacturing economy is generally expanding; below 50 percent indicates that it is generally contracting.

Source: Institute for Supply Management - Manufacturing Report on Business - www.ism.ws
Posted by KeyPoint Partners at 10:23 AM No comments: