The KeyPoint Report on retail real estate in Southern New Hampshire will be available soon at KeyPointPartners.com. Here are just a few highlights from this year’s report:

Market Overview
At the end of the study period, the Southern New Hampshire retail market consisted of 2,100 retail properties totaling 28,863,400 square feet, an increase of 1.3% over the previous year’s total of 28,497,400 square feet.

Vacancy
The vacancy rate in the region dropped dramatically over the study period to 9.5%, down from 11.4% last year, a decrease in vacancy of 16.4%. 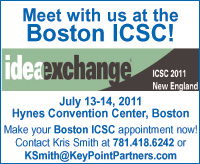 In terms of contraction by square footage, Sears Essentials and Burlington Coat Factory led the list, contracting by 115,400 square feet and 72,200 square feet respectively. Ocean Bank, Blockbuster Video, Borders Books, and A.J. Wright followed - few surprises here either, considering the bankruptcies of Blockbuster and Borders and TJX’s closing and/or conversion of A.J.Wright units. Ocean Bank’s contraction was of course due to the above-mentioned acquisition. Looking at contraction by store unit, Ocean Bank, Blockbuster, and Curves For Women headed the list. In terms of expansion by square footage by retailer category, Grocery, Amusement & Recreation, and Building Materials headed the list.

Below is a table of 2011 summary findings for the Southern New Hamshire study area:

The complete Southern New Hampshire Report will be released within the month, and posted on KeyPointPartners.com, following the 2011 KeyPoint Reports for Eastern Massachusetts/Greater Boston, and followed soon by the report for Greater Hartford, CT.

KeyPoint Partners'  GRIID™ is a powerful research tool that nobody else has - because we built it. GRIID™ means  “Geographic Research & Integrated Information Database”.  GRIID™ maintains detailed information on virtually all retail properties in Eastern Massachusetts/Greater Boston, Southern New Hampshire, and Greater Hartford, CT. These markets contain 44% of all retail space in New England. GRIID™ tracks more than 252 million square feet of retail space and approximately 61,000 storefronts.
Posted by KeyPoint Partners at 9:48 AM No comments:

May same-store sales for the ICSC’s index of major retailers rose by 5.4%. Industry sales were largely in line with year-to-date performance of 5%. However, segment performance was mixed. The weakest segment was Apparel, which some retailers claim was effected by weather. Apparel chains posted a 1% gain in May. Other segments ran as follows: Wholesale Clubs (12.3%), Luxury (10.4%), Department Stores (4.2%), Discounters (2.6%), and Drugstores (1.3%). Among individual retailers, Gap dropped 4.0% and Limited gained 6.0%; Costco was up 13.0% and BJs gained 7.4%. Nordstrom and Neiman Marcus gained 7.4% and 12.0% respectively; Target grew by 2.8% and TJX by 2.0%. Macy’s gained 7.4%, and Kohl's rose 0.8%; and Rite Aid rose 1.3%. See our more extensive list of retail sales results on the May Retail Sales Report blog entry.
Posted by KeyPoint Partners at 9:47 AM No comments:

Kohl’s will open about 40 stores this year, and 30 of them will be smaller models. Kohl’s smaller footprint generally averages 60,000 s/f compared with 90,000 s/f for a typical store...Jersey Mike's Subs is set to expand with the addition of new franchise partners in 7 states. Jersey Mike's Franchise Systems Inc. oversees more than 500 locations...Edible Arrangements plans to open 150 new locations in 2011, and 200 additional locations in 2012. Currently, Edible Arrangements has over 934 open locations, including 10 countries outside the US...2,000 Subway Restaurants franchisees are seeking locations for 2011 openings. Subway has opened nearly 700 new stores. The chain is testing a new Subway café format, specifically for office buildings and upscale properties...Disney Store plans to open interactive concept stores in more than 40 locations; by the end of 2011, it will have 60 new concept stores in 16 major markets in North America and eight countries...Krispy Kreme opened 6 net restaurants in the first quarter, ending the period with 652 locations, which included 86 corporate units and 566 franchised branches...Smashburger has added 5 new franchise partners for a combined commitment for 63 new US franchise units. Smashburger currently has 100 stores nationwide and plans to open 85 new restaurants in 2011. Smashburger's goal is 500 restaurants in the next few years...Macy’s Inc. will open two new stores near Chicago and Milwaukee, including its first-ever location in an outlet mall. The first will open in spring 2012 at Southridge Mall in Greendale, WI. In spring 2013, Macy’s will open a store in outlet center Gurnee Mills in Gurnee, Ill...Golden Gate Capital is buying California Pizza Kitchen Inc. for about $470 million, three months after the restaurant chain put itself up for sale. California Pizza Kitchen has 265 restaurants, with 205 company-run and 60 under franchise or license agreements. The deal is expected to close in the third quarter. Golden Gate's other restaurant buyouts include the purchase of On the Border last year...UK retailer Debenhams could soon enter the US retail market by opening space in Sears stores. Debenhams currently has 60 franchised stores around the world and plans to increase this number to 100...West Marine will open the largest store in the company's history, a 50,000 s/f flagship in Fort Lauderdale, Fla. Due to open by yearend, the store will be twice as big as the company's current largest location, and the largest of five flagship stores West Marine is opening across the country in 2011. The other four are in the 22,000-30,000 s/f range and include a recently-opened store in Woburn, MA...Mazzio's LLC has signed a franchise agreement for a 30 units throughout Virginia. The pizza chain has 170 units. Fransmart, the franchise development company behind QDOBA Mexican Grill, Five Guys Burgers & Fries and Zpizza, is spearheading Mazzio's growth...Marbles: The Brain Store has received $5.5 million from private investors to open 10 stores on the East Coast and Chicago this year. 9 of the new shops will be in New Jersey, Massachusetts and Maryland, with one in Chicago. Marbles has five Chicagoland and three Minnesota locations... Dick's Sporting Goods is moving quickly to open stores with a new target of operating 900 Dick's locations nationwide. Dick's had 447 stores in 42 states as of late April and plans to open 34 more this year…Wal-Mart opened its first Walmart Express in Gentry, AK. The 15,000 s/f store is one-tenth the size of a Walmart superstore. The new store is one of 20 small stores Wal-Mart expects to open by the end of January 2012.
Posted by KeyPoint Partners at 9:47 AM No comments:

The Great Atlantic & Pacific Tea Company (A&P) has been trying to sell 25 Superfresh stores, mostly in the Baltimore area.  It has found buyers for 12 locations, and will close the remaining 13 stores...Gap will close 200 Gap brand stores, grow its Gap Outlets to about 250 stores, a net addition of 50 or 60 stores, and grow its Banana Republic Factory store count to about 150, a net addition of about 40 stores.
Posted by KeyPoint Partners at 9:47 AM No comments:

Modell's in South Attleboro Square, has closed. No information was available on the company website. The location has been removed from its list of stores. The company has about 130 locations in the Northeast...Starbucks has opened its newest store, a two-story 3,000 s/f shop at 1380 Massachusetts Ave. The Seattle coffee chain has nearly 17,000 shops worldwide...Panera’s has opened at 450 Boylston St., the company’s 5th downtown shop and the 39th in MA. Five more Panera cafes are in the pipeline for 2011. Panera has nearly 1,500 shops in the US and Canada...Target is set to open in July at RK Swansea Place on Route 6 in Swansea, MA. The location is part of a new store prototype for Target with redesigned beauty, shoe, electronics, jewelry and home departments... Famous Footwear will also open a store in the complex. Marshall’s and Radio Shack will move from other Swansea locations to RK Swansea Place. The plaza will have 200,000 s/f of retail space...Monkey Sports purchased 921 Providence Highway in Norwood, a 9.9 acre site improved with 2 new buildings. Monkey Sports will occupy 25,000 s/f, the largest Monkey Sports store to date, with an anticipated fall opening...Discount grocer ALDI is building its newest store on Route 117 in Leominster, next to Wal-Mart. The Leominster store, the sixth in Massachusetts, will open this fall...A Tuscan farmhouse-themed Olive Garden opened this month on Route 114 in Danvers, MA, the first in the area with the new design, based on Olive Garden's Riserva di Fizzano restaurant in Tuscany...Wegmans has filed for permits to locate at Northwest Park in Burlington, MA.  Wegman’s hopes to open its 140,000 s/f location in late Spring 2013, part of the Phase I redevelopment of Northwest Park. Wegman’s is currently building its first Massachusetts location in Northborough. It has 79 US locations...Applebee’s parent DineEquity Inc. of Glendale, Calif., has reached a deal to sell 66 company-owned Applebee’s restaurants in the Northeast to Applebee’s franchisee Apple American Group LLC, including locations throughou tNew England and New York...Market Basket will open a new store at Westgate Mall next spring. The 80,000 s/f store will go in the 92,000 s/f addition on the south side of the mall. Market Basket has 65 locations in Massachusetts and New Hampshire... Borders is closing its Downtown Crossing location, Borders, which filed for Chapter 11 bankruptcy reorganization in February, has already shuttered eight other stores in Massachusetts, including its high profile Boylston Street store in Boston...Saladworks has announced an agreement with a multi-unit developer to open three stores in the next three years in Boston, MA. Saladworks operates 100 locations in 12 states, including one in Cambridge, MA.
Posted by KeyPoint Partners at 9:46 AM No comments:

Posted by KeyPoint Partners at 9:46 AM No comments:

Other Financial Indicators for May

The Conference Board Consumer Confidence Index®, which had improved in April, decreased in May. The Index now stands at 60.8 (1985=100), down from 66.0 in April. The Present Situation Index decreased to 39.3 from 40.2. The Expectations Index declined to 75.2 from 83.2 last month.
Source: The Conference Board - www.conference-board.org


All material in KeyPoints is provided solely for your private information, and we are not soliciting or recommending any action based upon it. This material is based upon information that we consider to be reliable, but we do not represent that such information is accurate or complete, and it should not be relied upon as such. Opinions expressed herein are our current opinions as of the date appearing on this material only, and are subject to change without notice. Copyright KeyPoint Partners, LLC, 2011.
Posted by KeyPoint Partners at 9:45 AM No comments: