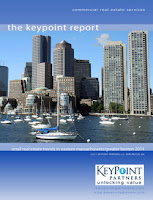 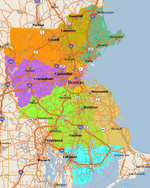 City and town rankings by total inventory include the same top 10 from last year. Boston, Cambridge, and Brockton again hold the top three spots. Lawrence remains the city/town with the highest vacancy rate, coming in at 18.3%, but significantly below the 23.0% level recorded last year. Wilmington jumped into the top 10 from 52nd place by way of the closing of the 37,400 square foot Dinette World & Lighting Center.  The lowest vacancy rate in the region (for towns with 500,000 s/f or more of retail space) was recorded by Abington at 1.4%, remaining the “healthiest” retail community in Eastern Massachusetts from a year ago. Wrentham finished the study period in second place with a 1.6% vacancy rate, buoyed by Wrentham Village Outlets.
Expansion/Contraction by Store Size:
All store size categories experienced significant declines in vacancy with the exception of the 5,000-9,999 square foot stores. The 2,500 square feet and under component is the only category to lose square footage - a large portion of this segment consists of mom-and-pops, and significant fallout of these independent operators has resulted in a net loss in the 2,500 square feet and under category, reflecting a market share decline over several years from 24.0% to 20.5%.
Development:
It was another quiet year for developers, with only a handful of new projects coming on line in 2010. The bulk of new space came by way of large format, freestanding units such as Target, Lowe’s, BJ’s Wholesale, and Market Basket supermarkets, as well as the South Shore Plaza expansion which added Nordstrom and Target.
Retailers:
A number of big box retailers expanded last year, with BJ’s Wholesale Club adding approximately 327,000 square feet to the region with three new locations, and Target increasing its presence in the region by 229,700 square feet. Heading the list of retailers that increased their store counts during the study period was 7-Eleven with 41 stores. Both Walgreens and Get in Shape for Women were next, each improving their positions with 13 new units. The TJX shuttering of its AJ Wright division resulted in a space reduction of 361,300 square feet, the most of any retailer in the region. Blockbuster Video contracted by 180,300 square feet, and was down to only nine stores in the Eastern Massachusetts region at the end of the study period as it attempts to survive in the world of e-commerce. In terms of store count, White Hen Pantry, Blockbuster, AJ Wright, and Curves for Women experienced the largest declines.

The full report contains much more detailed information on these categories and more, as well as additional data new to this year’s report.  Stay tuned!


The KeyPoint Report examining the retail real estate marketplace for Eastern Massachusetts/Greater Boston focuses on the 12-month period beginning March 1, 2010 and ending May 1, 2011. The report examines supply, vacancy and absorption, retailer activity, and market composition by store size and retail categories. The studied market includes 189 cities and towns representing more than 3,500 square miles (44% of Massachusetts' land area) and nearly 5 million people (76% of the state population).
Posted by KeyPoint Partners at 12:51 PM No comments:

Cinemagic gained the Greenland, NH Planning Board's approval to construct a 49,000 s/f 12-screen theater and IMAX complex on Route 33...Tiffany & Co. will close its shop at the Atrium Mall in Newton and move across the street to the Mall at Chestnut Hill. Tiffany will operate its Atrium shop until the new location opens around October...Simon Property Group will assume leasing, management, and marketing of the Fox Run Mall in Newington, NH The company has ownership interest in 16 Massachusetts malls including Burlington Mall, Copley Place, Northshore Mall, and South Shore Plaza...Smoothie King opened its first Massachusetts location on Newbury Street. The privately held franchise company sells fruit smoothies infused with vitamins...TD Bank plans to open as many as 15 more Massachusetts branches by the end of 2012, and is considering relocating several branches and adding standalone automatic teller machine kiosks. TD Bank currently operates 1,250 branches in 15 states including 160 in Massachusetts...The relocation of  Stop & Shop’s New England division headquarters from the Braintree back to Quincy Center is slated to be done by early July. Employees will move to Quincy from other locations as well. Stop & Shop and parent company Ahold USA expect to have as many as 950 employees in the Quincy tower by year’s end. The company will add several gas stations to the 68 currently in New England. The next station will open in Quincy later this year. Stop & Shop is continuing to refurbish stores, with 20 locations scheduled for upgrades this year. Stop & Shop plans new stores in Andover and Cranston, RI, a relocation of its Chelmsford store, and a complete replacement of its Hyde Park store. Next year, Stop & Shop will open a second store in Pembroke. In related news, Street-Works LLC, The company that is redeveloping Quincy Center, wants to add 750,000 s/f of retail, office and commercial space to the project . The company says it will complete the project by 2020, with the first step completed by 2013...Lord & Taylor will open at the Mall at Rockingham Park in 2012. The store will be the only Lord & Taylor in New Hampshire, Vermont and Maine.There are three Lord & Taylor stores in New England, with the nearest in Burlington, MA. Lord & Taylor also will open a new store in New York City next year. Lindt Swiss chocolatier opened its newest factory outlet store at the Meadow Brook Crossing plaza in Amherst, NH...Gershman, Brown, Crowley has purchased the former site of Eastern Chem-Lac Corp. in Malden, MA. The buyer will develop a 13,000 s/f CVS on the parcel after razing the existing building.
Posted by KeyPoint Partners at 8:28 AM No comments:

Clothing retailer Metropark has filed for bankruptcy and is closing all 69 stores nationwide. Gordon Bros. Group and Hilco Merchant Resources are running going-out-of business sales for the retailer.
Posted by KeyPoint Partners at 8:27 AM No comments:

Macy's, Inc. announced locations for three new Bloomingdale's Outlet stores to open in fall 2011. Stores will open in Estero, FL, Schaumburg, IL, and in the Wrentham Village Premium Outlets, Wrentham, MA...Athleta, the sportswear brand by Gap Inc., will open a 3,500 s/f in NYC. Gap is looking for more Manhattan Athleta locations...Chevron plans to add 60 to 100 ExtraMile convenience stores, mostly franchises. Currently, the company has more than 500 ExtraMile locations, of which 232 are owned by franchisees...Fresh & Easy Neighborhood Markets Inc., the grocery/convenience subsidiary of Tesco PLC, plans 50 more store openings by the end of the current fiscal year. The firm expects to break even by the 2012/2013 fiscal year when it hits around 300 stores...Francesca's Restaurants, the Chicago-based chain of 20 restaurants plans to open 50 to 60 national locations...Pep Boys plans to add 50 stores nationally this year. The company has 602 locations...SuperValu plans to increase its Save-A-Lot division by 160 new stores this year. There are currently 1,280 US stores...7-Eleven Inc. will buy the Wilson Farms convenience store chain, and will rebrand the stores. Wilson Farms has 188 stores in New York State. 7-Eleven operates 6,700 US locations, and more than 40,500 locations worldwide...Darden Restaurants plans to more than double the size of LongHorn Steakhouse, from the current 345 locations to 600 to 800 units over the next decade...Children's clothing retailer Carter's plans to add 55 new Carter's and OshKosh B'gosh stores in 2011...hhgregg opened a 31,000 s/f store in Myrtle Beach, SC...Hudson’s Bay Co. will test its Home Outfitters concept in the US, opening two stores in New Jersey in late summer. If successful, the company will expand the home-goods concept, which will be called Lord & Taylor Home in the US...Restaurant chain Texas Roadhouse opened two restaurants so far this year, with a forecast of 20 new stores by the end of the year...Rue21 announced the opening of its 500th etc! store. The etc! format was introduced 5 years ago to highlight the company's expanded accessories category, and has been incorporated into all new Rue21 stores and remodels. The company is on target to open 110 new stores and convert approximately 35 existing stores to the etc! format in 2011...Ollie's Bargain Outlet Inc. plans to open its 100th store next month in a former Circuit City location in Barboursville, WV. Ollie's plans to open 16 stores this year, and plans to have 200 stores within five years...Walmart announced plans to open dozens of new stores throughout South Carolina over the next five years. Walmart has 77 Walmart stores, nine Sam's Club locations and two distribution centers throughout the state...U.K.-based apparel brand Superdry plans to open 3 new stores in the coming months. The company hopes to open 10 to 12 stores a year over the next four years. Currently, the company operates 110 stores worldwide...Firehouse Subs announced the signing of nine agreements to add 429 restaurants to the chain. Firehouse Subs has grown from 30 restaurants in 2000 to its 416 current locations. The company has set goals to open 2,000 locations by 2020.
Posted by KeyPoint Partners at 8:00 AM No comments:

Team Updates: Mario Boiardi joins the Burlington, Massachusetts office as Accounts Payable Clerk. Mario had been an Intern on the Property & Asset Management team. Vanessa Yamashita has been promoted to Senior Property Manager in the Burlington, MA office. Jessica Phillips has joined the Property & Asset Management Team as Property Manager in the Hartford, Connecticut office. Jessica had been with Northland Investment Corporation...New Business: The Leasing Team has added three listings: Plaistow Place, Plaistow, NH: a 4,500 SF vacancy. Vice President of Leasing Don Mace is handling the assignment; 308 Walnut Street, Newtonville, MA: a 2,409 SF vacancy. Senior Leasing Associate Lynne Cohen is handling the assignment; and Kingsbury Plaza, a Hannaford Supermarket-anchored center near the intersection of Routes 3A and 53 in Kingston, MA. Leasing Associate David Hough is handling the assignment.
Posted by KeyPoint Partners at 7:53 AM No comments: 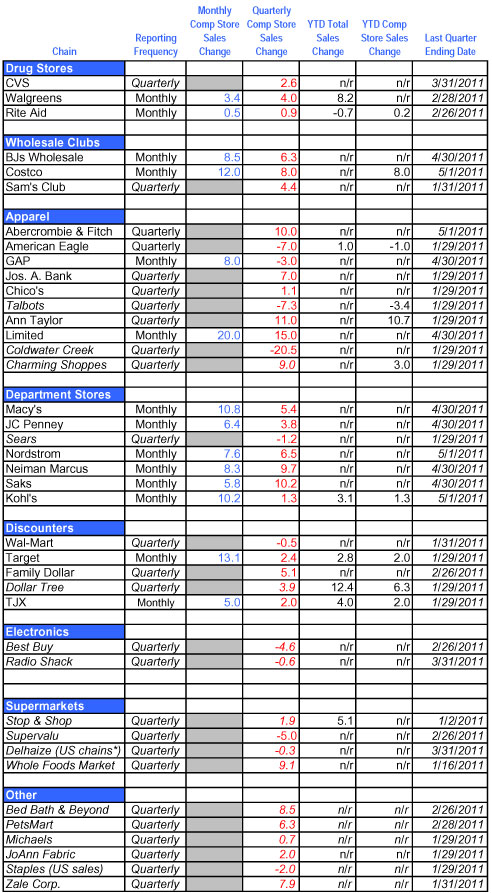 Notes: figures gathered from individual company websites, press releases, and Federal filings.  Not all companies report all figures; results not reported will be marked “n/r”. Quarterly results will be updated when available; quarterly figures are shown in italics. Figures from companies not calculated to one decimal point automatically received an ending digit of 0. *Includes Hannaford Bros., Food Lion, Bloom, Bottom Dollar, Harveys, Kash n' Karry and Sweetbay.
Posted by KeyPoint Partners at 7:52 AM No comments:

Other Financial Indicators for April 2011

The US Commerce Department reported that April retail sales rose by 0.5%. The increase was the smallest since July and followed a 0.9% March gain that was more than double the previous estimate. Sales excluding automobiles and gasoline increased 0.2%.
Source: U.S. Department of Commerce - commerce.gov 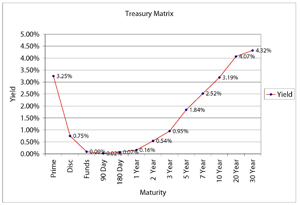 
All material in KeyPoints is provided solely for your private information, and we are not soliciting or recommending any action based upon it. This material is based upon information that we consider to be reliable, but we do not represent that such information is accurate or complete, and it should not be relied upon as such. Opinions expressed herein are our current opinions as of the date appearing on this material only, and are subject to change without notice. Copyright KeyPoint Partners, LLC, 2011.
Posted by KeyPoint Partners at 7:19 AM No comments: