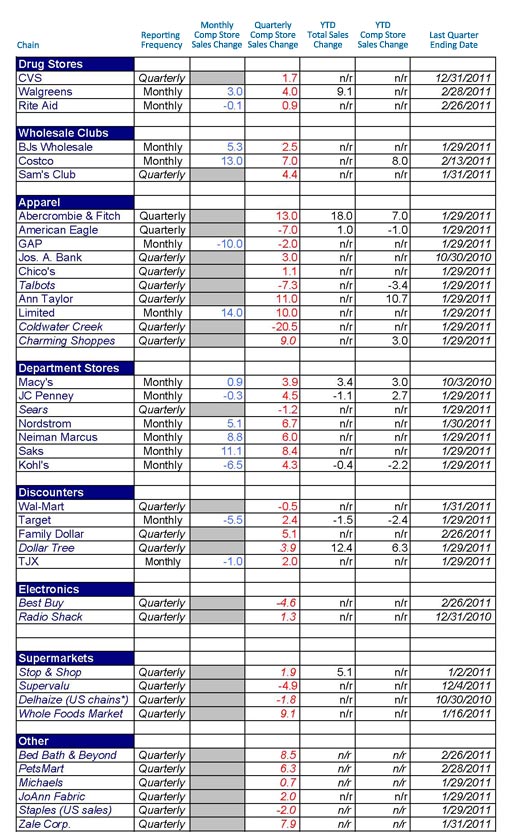 Notes: figures gathered from individual company websites, press releases, and Federal filings.  Not all companies report all figures; results not reported will be marked “n/r”. Quarterly results will be updated when available; quarterly figures are shown in italics. Figures from companies not calculated to one decimal point automatically received an ending digit of 0. *Includes Hannaford Bros., Food Lion, Bloom, Bottom Dollar, Harveys, Kash n' Karry and Sweetbay
Posted by KeyPoint Partners at 8:14 AM No comments:

Cardi’s Furniture opened a 5,000 s/f mattress store at a former Blockbuster in Plymouth, MA, Cardi’s 13th standalone mattress store. Cardi’s Furniture operates 20 stores in MA and RI...Ground was broken this month for 5,000 s/f of additional retail space at 780 Providence Highway in Dedham. Existing tenants in the two-building property include Bed, Bath & Beyond; Verizon Wireless; The Vitamin Shoppe; and Massage Envy. The property is scheduled to be completed by this summer...Work on a $10 million renovation of the Pheasant Lane Mall will begin early next month. The mall will remain open during the project, which includes the addition of a new Dick’s Sporting Goods store. Two new restaurants, Burton’s Grill and Red Robin Gourmet Burgers, will be added to the 1 million s/f mall...Charles River Apparel began construction on a 1,000 s/f retail store within the company’s nearly corporate office/warehouse on Route 1 in Sharon. The store will feature rainwear, athletic apparel and outerwear...UFood Restaurant Group, Inc. will open between 5 and 8 new locations in the coming year. The company has recently contracted with two army bases, and is expanding its presence at airports and hospitals...Boston’s W Hotel was sold, less than a year after its developer filed for bankruptcy protection. Pebblebrook Hotel Trust is buying the hotel from developer Sawyer Enterprises for $89.5 million. The transaction did not include the 123 condominiums on the property. The hotel will continue to be operated by an affiliate of Starwood Hotels and Resorts Worldwide Inc...Ace Ticket is moving to a new $3 million Kenmore Square headquarters, complete with a high-tech ticket kiosk. Ace bought commercial space across the street from Kenmore’s landmark Citgo sign to serve as the company’s new base. The firm intends to build a storefront at the site in the next few months...MAD Corp. LLC, parent company of the Oyster Bar Grill on Martha's Vineyard filed for Chapter 11 bankruptcy protection...Aldi Foods, which is expanding into Worcester next month and already has shops in Hadley, Milford, Raynham and Springfield, is planning a 10,000 s/f store to open in June at the former Toys “R” Us location in Medford’s Fellsway Plaza. The company expects to open three more MA stores next year...Whole Foods is no longer pursuing plans for a location in South Burlington, VT. The national organic food retailer dropped South Burlington from a list on its website of more than 50 locations in development. Whole Foods has more than 300 stores...Five Below opened a 7,500 s/f store in the Berkshire Crossing shopping mall in Pittsfield, MA. The chain plans to open 50 stores in new and existing markets this year...Firehouse Subs is expanding into 9 states, including Massachusetts, with 69 franchises in the Boston area. The chain, which currently has 416 locations, is looking to open 429 new stores.
Posted by KeyPoint Partners at 8:11 AM No comments:

Talbots Inc. expects to close as many as 100 stores over the next two years. The retailer expects to renovate 70 stores in fiscal 2011, close 90-100 stores, and consolidate or downsize 15-20 stores over two years. It had 568 stores at the end of January...Charming Shoppes will close 240 unprofitable stores in 2011; more than half will be Fashion Bug stores. The locations were not disclosed. All 30 of its Catherines Plus Sizes stores will be shuttered over a two-year period. The company operates 2,064 stores in 48 states... Blockbuster Inc. said in court filings that it will start closing 186 more stores, bringing the number of its US locations closed or slated for closure to 1,145, or more than a third of its total...Sbarro Inc. has filed for Chapter 11 bankruptcy protection. The chain has closed 150 restaurants in the past two years.
Posted by KeyPoint Partners at 8:08 AM No comments:

Accelerating: Men’s Wearhouse will remodel 100 stores and open 20-30 new stores this year...VF Corp. plans to open 400 US stores across its various brands during the next few years. Brands includes Vans and The North Face...Le Duff group, owner and operator of 820 outlets including the Del Arte and Brioche Doree chains, has purchased the Bruegger's bagel chain from Sun Capital Partners Inc. Terms of the deal were not disclosed. It plans to open 70 additional Bruegger's locations this year...Frozen yogurt concept 16 Handles is set to open 5 new East Coast stores this spring, and expansion plans call for up to 8 new stores in the next 2 years...Wal-Mart will manage nearly 1,600 eastern US stores in 20 states from a new eastern business unit in Atlanta...Five Below opened 3 stores in Baltimore and North Carolina. Five Below plans to open 50 stores this year. At present, it has 141 stores in 13 states...The Wet Seal expects to open 25-27 net new Wet Seal stores in 2011 and 4 net new Arden B stores...Boardwalk Fresh Burgers & Fries has finalized a deal to open more than 30 restaurants in the Northwest, and has more than 200 US restaurants in development...Bar Louie is adding 100 new locations in 20 markets, including Boston, targeting existing restaurant space in the 4,000-7,000 s/f range. The chain has 50 US locations...Olive Garden plans to renovate as many as 400 restaurants into its new Tuscan farmhouse design, introduced in 2000...Sony Electronics unveiled its new Sony store this month in LA. The 4,200 s/f store is designed to allow consumers to explore the complete Sony experience...Dish Network Corp. won the auction for Blockbuster with a bid valued at $228 million in cash. The transaction, expected to close during the second quarter, needs court approval...Cafe Rio Mexican Grill will open its first East Coast location in Olney, MD, the company’s 40th and the first of 9 planned in the DC area. The company currently operates 39 restaurants...hhgregg plans to open 35-45 new stores this year, on top of last year's 43, as it steadily works its way to becoming a 600-store chain. This year's focus will be Chicago, where hhgregg plans to open upwards of 20 stores in the fall...Panchero's taco and burrito restaurants plans to have 60 stores by the end of 2011, and about 20 new locations each year for the next several years. Panchero's has 50 US locations...Bed Bath & Beyond expects to open 45 new stores this year across its banners, which also include Christmas Tree Shops and buybuy Baby, and expects to continue renovating and relocating existing stores...Pier 1 plans to open approximately 80 stores and close approximately 30 stores as part of its net new store growth initiative, which also includes expansion of its store portfolio from 1,046 Pier 1 Imports stores today to approximately 1,100 stores within five years.
Posted by KeyPoint Partners at 8:07 AM No comments:

I’ve recently been recalling a seminar I attended in Columbus, Ohio back in the mid-80s. One of the speakers there discussed the notion that in the near future we were going to have the ability to purchase merchandise electronically. By sitting down in front of a computer, connecting with the outside world using something called “the internet”, and communicating with a retail entity, we would actually be able to complete a transaction, after which we would receive said merchandise at home without having to enter a store at all. 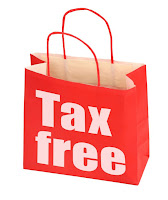 She went on to say that cyber-shopping would change the way consumers shop forever - and would significantly reduce the need for physical retail space. I’m not sure if I had even heard of the internet at the time. I couldn’t imagine the masses owning their own computers, which were relatively expensive back then, and I actually thought something like, “What has this woman been smoking?” Well, she may have been a little ahead of her time, but…wonders never cease!

Today, while total retail sales plod along with low single-digit gains, e-commerce sales continue to grow annually by double-digits. In 1995, electronic shopping and mail order sales accounted for a mere 2.8% of total retail and food service sales (based on US Census annual retail sales data). By 2005, that sales ratio nearly doubled to 5.5%. Last year electronic shopping represented 7.5% of total retail and food service sales. North American sales at Amazon alone jumped to $18.7 billion in FY 2010, a 45.8% increase from the prior year. Amazon‘s worldwide sales reached $34.2 billion in 2010.

The relentless rise of online retailing has long been perceived as a major contributor to the collapse of Circuit City, Borders, specialty music stores such as Tower records, and a score of other retail casualties. However, while the impact has been significant, there have been other forces at play. Specialty music stores were likely impacted more by retailers such as Wal-Mart and Target using CDs as loss leaders, making it virtually impossible for smaller specialty units to compete effectively on price. In addition there’s the huge electronics market share those two major discounters (and to some degree the wholesale clubs) diverted from Circuit City and every other electronics specialty store. Of course both Borders and Circuit City had their shares of internal problems quite apart from the rise in internet sales, which only accelerated the eventual, inevitable bankruptcy filings. But it’s more than fair to say that online shopping, as that speaker in Columbus, Ohio predicted so long ago, has forever altered the way we shop, and where.

There’s something else that has been profoundly altered by the rise in online commerce, something which as been talked about quite a bit before, but has lately taken on a particular urgency in the face of huge government budget shortfalls – and may conceivably have significance to the future survival of brick-and-mortar retailers.

If I walk to the shopping center down the street and make a purchase, I’ll pay a state sales tax on that purchase, as I’m sure you would, too. But what if I go online and purchase the same item? A 1992 Supreme Court ruling prevents states from collecting sales tax from an online retailer if that retailer has no physical presence in that state. Technically consumers are required to pay the applicable state sales tax, via the honor system, in the form of a “use” tax – which we all do scrupulously, correct? I didn’t think so.

Assuming an average 5% sales tax across the nation, total electronic shopping and mail-order house sales of $272 billion would generate tax revenue of $13.6 billion. That’s a great deal of lost revenue – revenue that lawmakers and others are gearing up to claim.

According to a recent Rasmussen poll, approximately 64% of consumers oppose an online tax. In spite of that sentiment, a number of states are trying to work around the Supreme Court ruling, and are implementing new laws that require online companies to apply the appropriate sales tax to online purchases if the online retailer has a physical presence in that state or is affiliated with a company conducting business in that state. The State of Texas recently sent Amazon a $269 million sales tax bill because it operates a fulfillment center there. Sen. Dick Durbin (D ILL) will reportedly propose legislation as early as this week to tax all online purchases.

As I’ve already noted, a change in online sale tax laws probably wouldn’t have helped Circuit City or Borders. Their troubles ran deeper. But a host of other brick-and-mortar retailers, who have seen their stores used as “showrooms” for purchases later consummated online, and who have long argued that the sales tax situation constitutes an extremely unfair advantage for online retailers, have to be pleased that lawmakers are finally paying more (tax) attention.

Bob Sheehan, Vice President of Research
BSheehan@KeyPointPartners.com
Posted by KeyPoint Partners at 8:00 AM No comments: